Tuna and His Plants 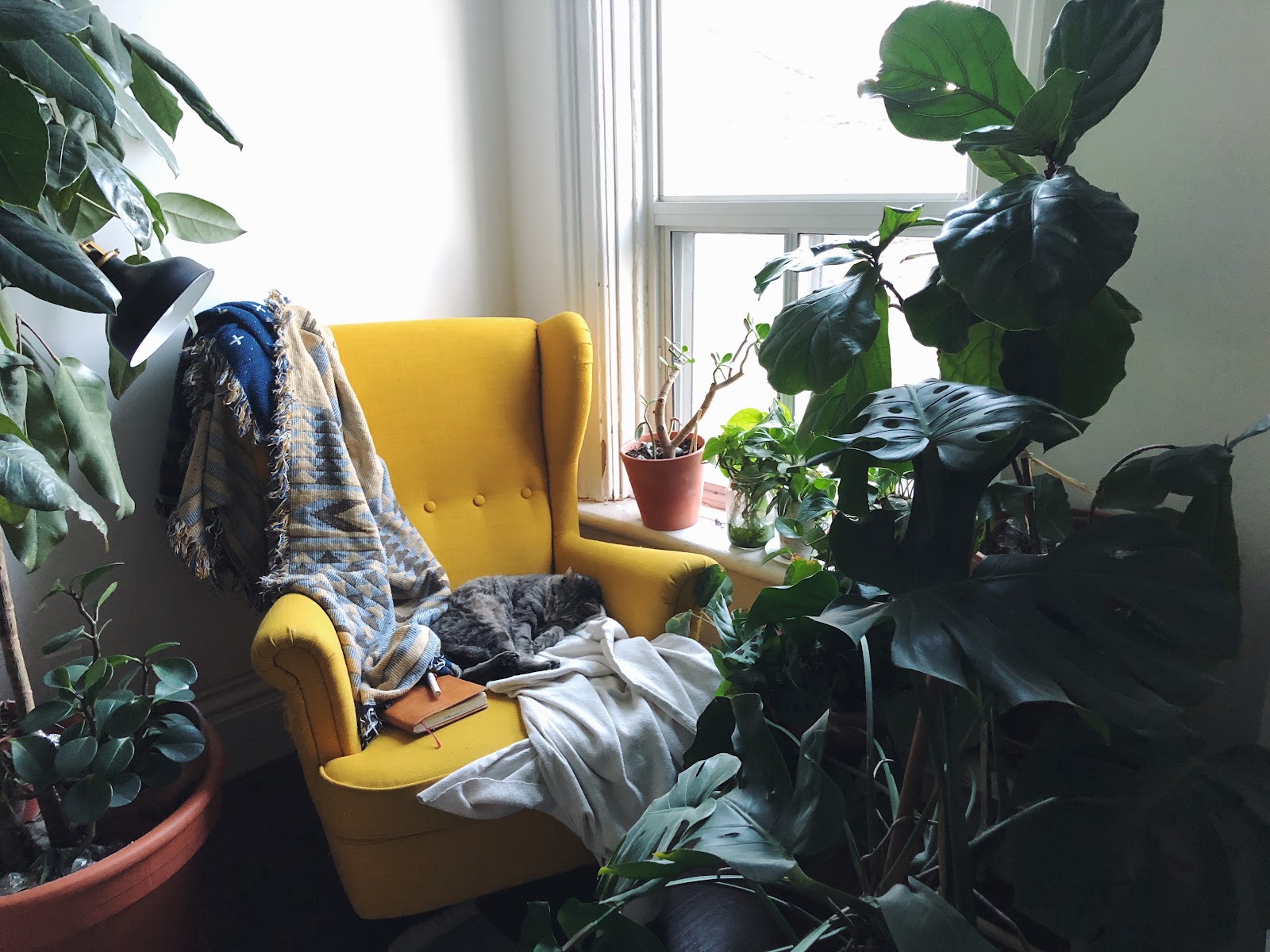 Some of you have been wondering about a Tuna update, which is heartbreaking to even think about. Everyone is asking what’s the deal aren’t there two cats is Tuna still okay we are all invested in this cat saga don’t leave us hanging, I have no answers, nor do I wish I had any, having been left hanging myself.

I have been thrown off by everything and am just subsisting on nose bops. Tuna is still here, and we are still waiting it out, hoping to give him as many treats as he will take in these final days. He is still bothering Chicken, pawing at him in the litter box, stalking him behind piles of laundry. As good as it gets. He was originally diagnosed with the end stages of feline leukemia, which he still has, and different prognoses from different vets ranged from several days to a couple of weeks. He has outlasted them all, fed mostly on cat treats and high fat kitten food and steroids. Each impending vet visit that dizzying dance between unrealistic hopes for a miracle and spiralling depression. Everyone is very impressed by every week he manages to stay alive, while I hover in the corner, trying to take the credit with my healing Virgin Mary touch.

The renovations continue, couches have been moved from here to there, unearthing plumes of drywall dust, plants shuffled around, the cats finding new places to enjoy the afternoon sun, this yellow couch once popular in the middle of the living room retaining its popularity now in the corner.

In any case, life rolls on, in its unfortunate, crunching, crushing way. The sun is shining, the plants absorbing as much sun as they can through the film on the windows, the film of drywall dust covering their leaves, waving their fronds at me pathetically, Tuna’s teeth mark holes like the footprints of little men traversing the dunes. Just a little snack! Tuna says. My poor fronds! The plants respond. The other day, on Palm Sunday, the church gave Naomi and Caleb these long segments from a palm frond, and they were brandishing them about. Tuna caught one and then the other, crunch crunch with his kitty teeth. We could only all look at each other, the inevitability of life, Charlie Brown’s droop upon all of our faces, if for our own various reasons.

There are lots of good things ahead, some small things I’m particularly looking forward to, some shipments arriving sooner than others. We sometimes have shipments that take 2 or 3 or 6 months to arrive, and that is just the way of things in the Canadian stationery world, no massive US conglomerate distributors to hold warehouses full of goods to ship in a snap. Actually there are, and we do sometimes order from them, and it costs us more in exchange rate and duties and international shipping. But otherwise we cling to our Canadian companies. How do you know how many notebooks of each size and colour and ruling you’re going to need in six months? Eight? Dated planners for next year? Everyone is just guessing their way through things, me twirling off in the distance, eyes closed, existential cat angst drowning me in thoughts of the future.

We are all at the mercy of boats and plans and language barriers, and at one point in time I would be lamenting the out of the stocks on the website and shelves, and I suppose I still am, but I’m also just accepting that we are at this point on life’s journey and things will come when they do. Who am I to rush along Time any faster than it is already whooshing past me?

We recently have begun eating these Häagen-Dazs ice cream bars for dessert, which are really delicious, very satisfying. The other day, I pulled one out of the big freezer and had it in the middle of the day for no reason at all. Or, I suppose, if I had to come up with a reason it would be that it seemed like a good idea at the time. As I was walking to the recycling to throw the box out, I was perusing all the delicious chocolate-covered facts written on the back, and I discovered that this “mini” ice cream bar has 57% of one’s daily fat intake. This left me pondering on whether or not to do some math, as on some other days I had, perhaps, eaten two of them, or to let things slide over me, awash in the fragility of existence. Please, no one report to me the delicious facts of bubble tea. I cannot handle anything else.

Well, here we are and here he is again, some time later, someone ill-raised having enjoyed some sort of cheese snack in his proximity. This little turkey who is enough to melt everyone’s hearts into one big pool of something sweet and tangy and just too much for this world. 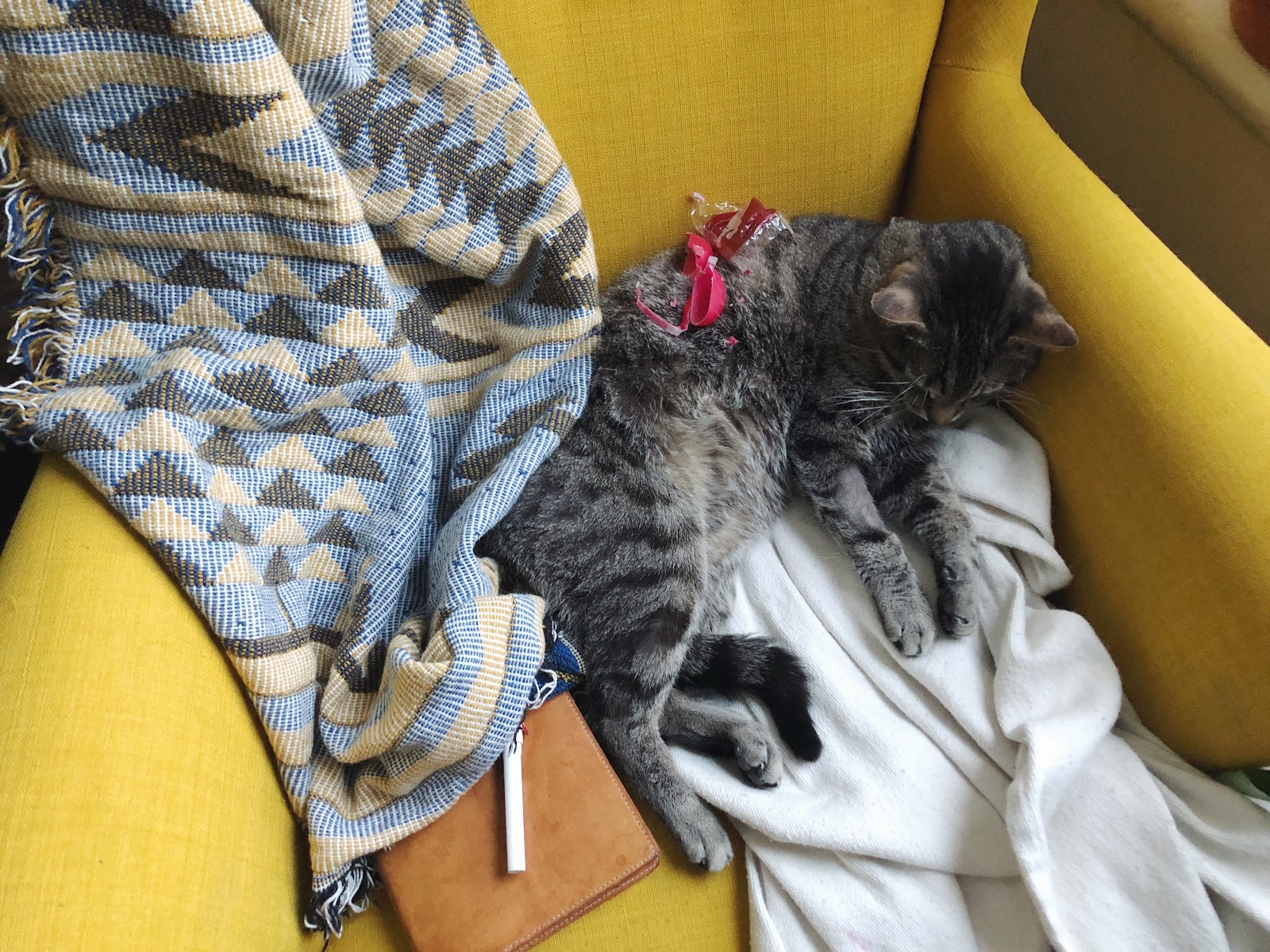 Thank you for not just extending Tuna’s life but amplifying it with the joys of scratches, incredible health care, the laughter of children and surrounding him with love.

I hope I’m that lucky. Take good care of yourself! N

I’m so sorry to hear the news about Tuna. This is never easy. I hope you can find strength in the good memories and in the fact that he chose you and you gave him the best life he can ask for ♥

So sorry to read about Tuna’s illness, it is so sad to see that beautiful animal’s life cut short. All with you on that front.

What a lovely post. Heartbreaking to learn of Tuna’s lot in life but happy to know he has the best human parents!

Thank you for the update on Tuna. How amazing is it that instead of spending his days struggling on the street he will spend them surrounded by love and comfort and treats and nose boops. Truly a Wonder Cat.

Tuna’s such a strong fighter! I’m glad he has you guys to take care of him.

You know, I can’t help but think that dear Tuna made his way to your family when he most needed it. He found a place of love for his last days and you are giving this to him. It’s really a beautiful (and heartbreaking) love story.

So sorry to hear about Tuna! That’s a heartbreaker for sure. My older cat got canncer (not leukemia apparently) at about the age of 10, and all we could do was spoil her until she was no longer comfortable, and made that last trip to the vet. 😭 It’s not an easy thing to deal with. Do you need help with vet bills? I can’t afford much, but I would like to chip in if needed.

This news that you’ve just shared about Tuna’s diagnosis is so, so sad. May he continue to live life to the fullest until the last second.