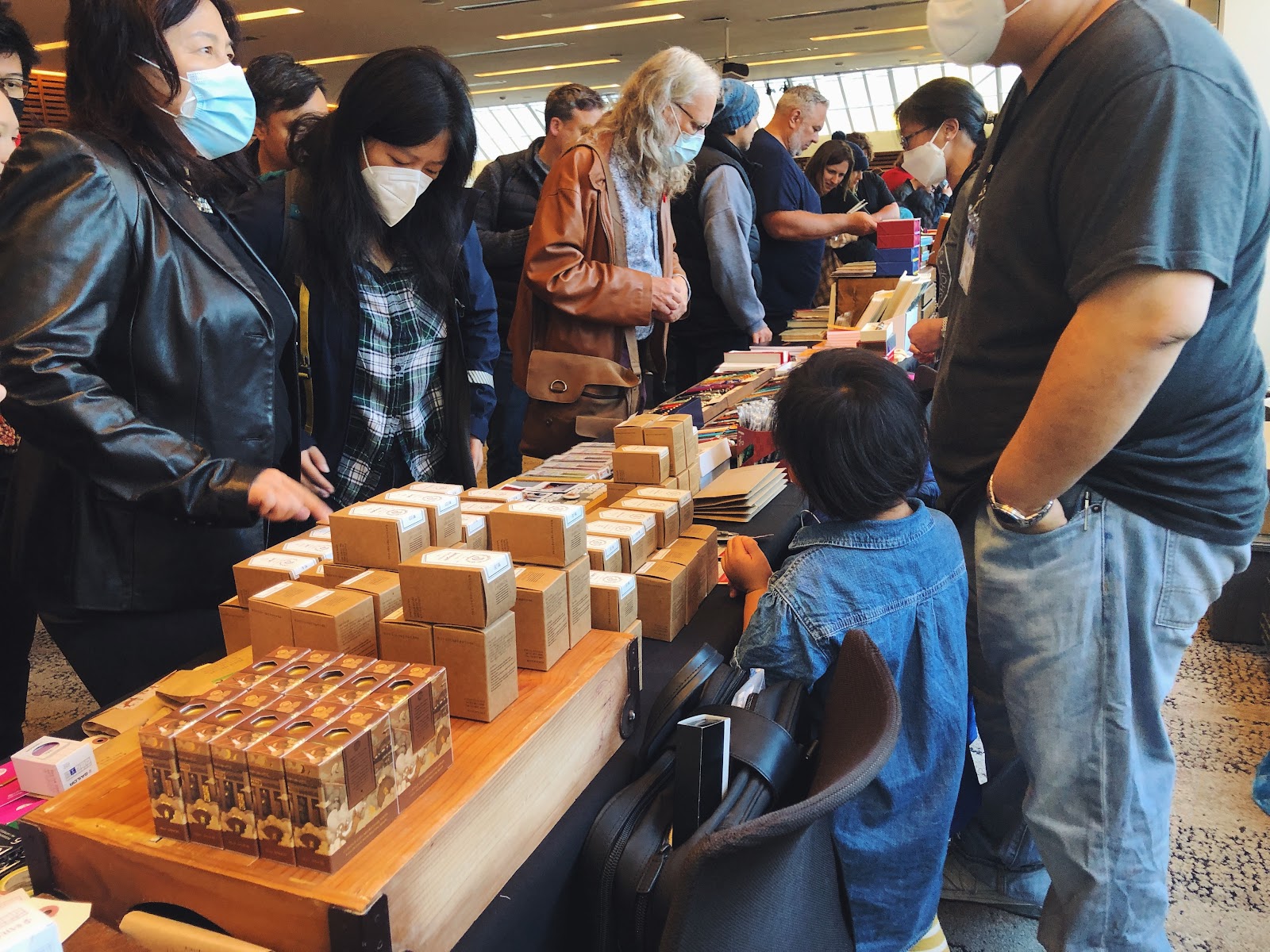 Last October, the pen show ran again after being closed for Covid for several years. I’m a bit late to the punch, but I thought I’d share these photos anyways.

Scriptus, the Toronto pen show, is always a good time. Vendors of various sorts all cobble together their wares, and it’s a rare time for people to get to come to one place (for free!) and see all sorts of stationery goodies, including vintage pens, and maybe also get a pen tuned or looked at.

After a few years off, we were a bit rusty, but it was also like riding a bike, and there was a lot of familiarity in doing the show again. Actually, it was like déjà vu, the same last minute scramble to throw things into bins, the same somewhat claustrophobic ride up the service elevator at the library, the same tables in the same location, and—three years later—another baby. Life’s circles!

This year, with three kids and some balloons in tow, I left the house a bit later to head directly to the library, and it was spooky vibes, but it was also October, so I suppose it was as it was supposed to be. 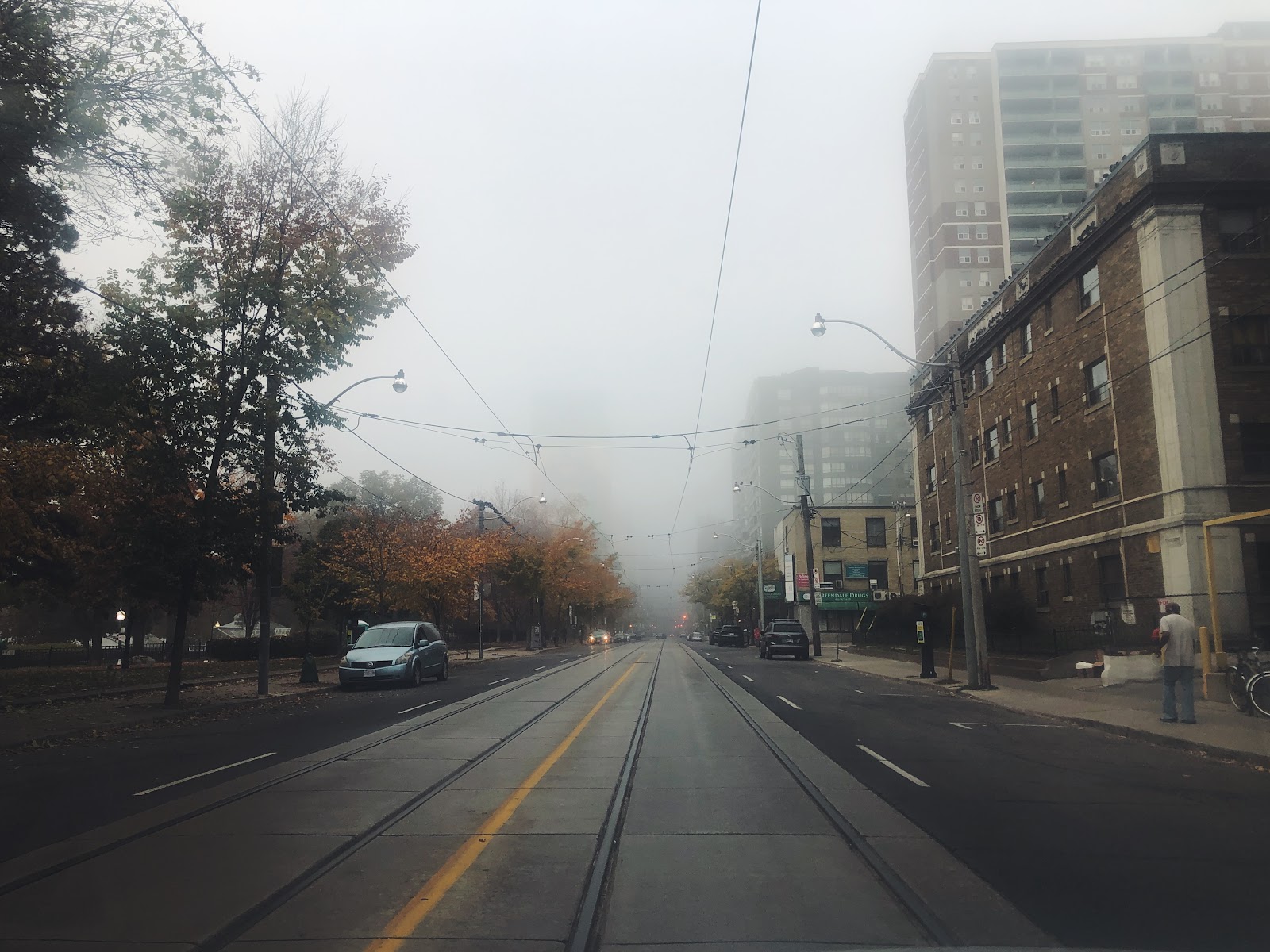 Big changes for us:

I think that was about it. Small tweaks and adjustments, new things every year, bins half filled everywhere in the warehouse in the week leading. up to the show as we ruminate on what the show will be like this year. We launched our Dominant Industry Ginger Chicken and Tuna Grey inks at the show, and they were very popular, as were the cat buttons. As of this writing, two months after the show, we’ve sold out of multiple shipments of the inks, although of course that will always taper off over time. 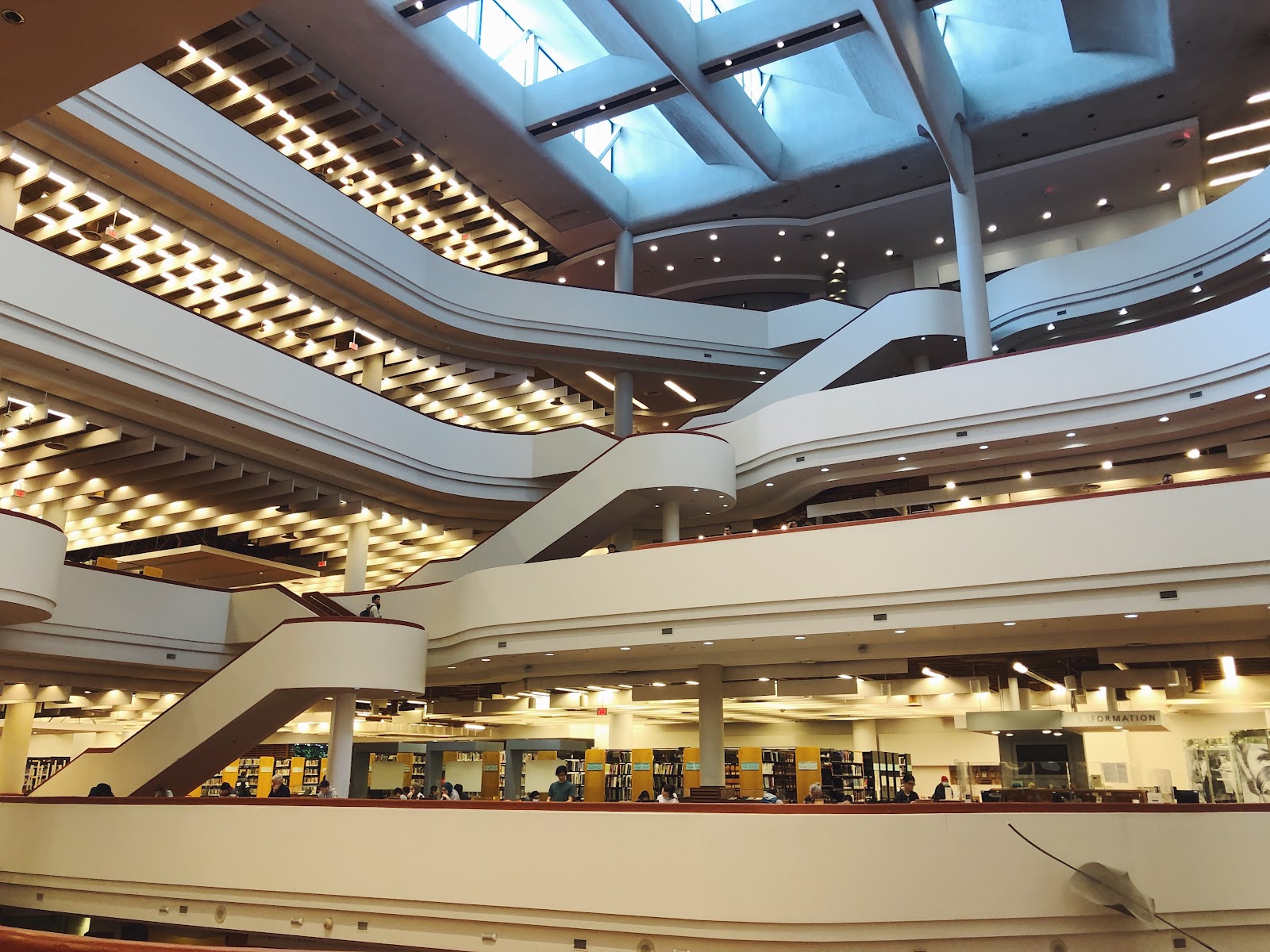 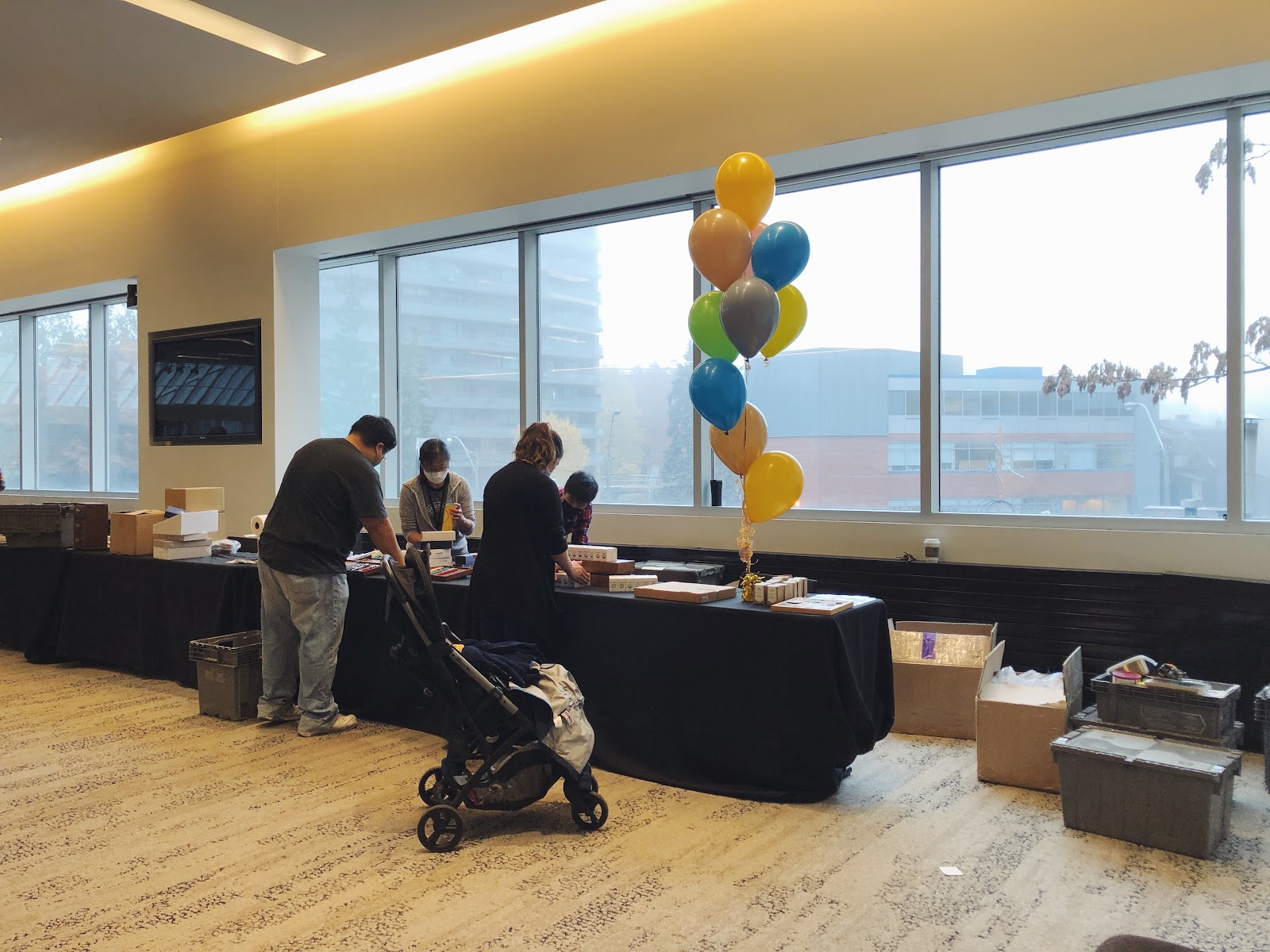 This team! As always, a warm heart. Our team has changed over time, sometimes faster and sometimes slower, but this is always a fun day for our team. Some of these faces have been with us for quite a while. 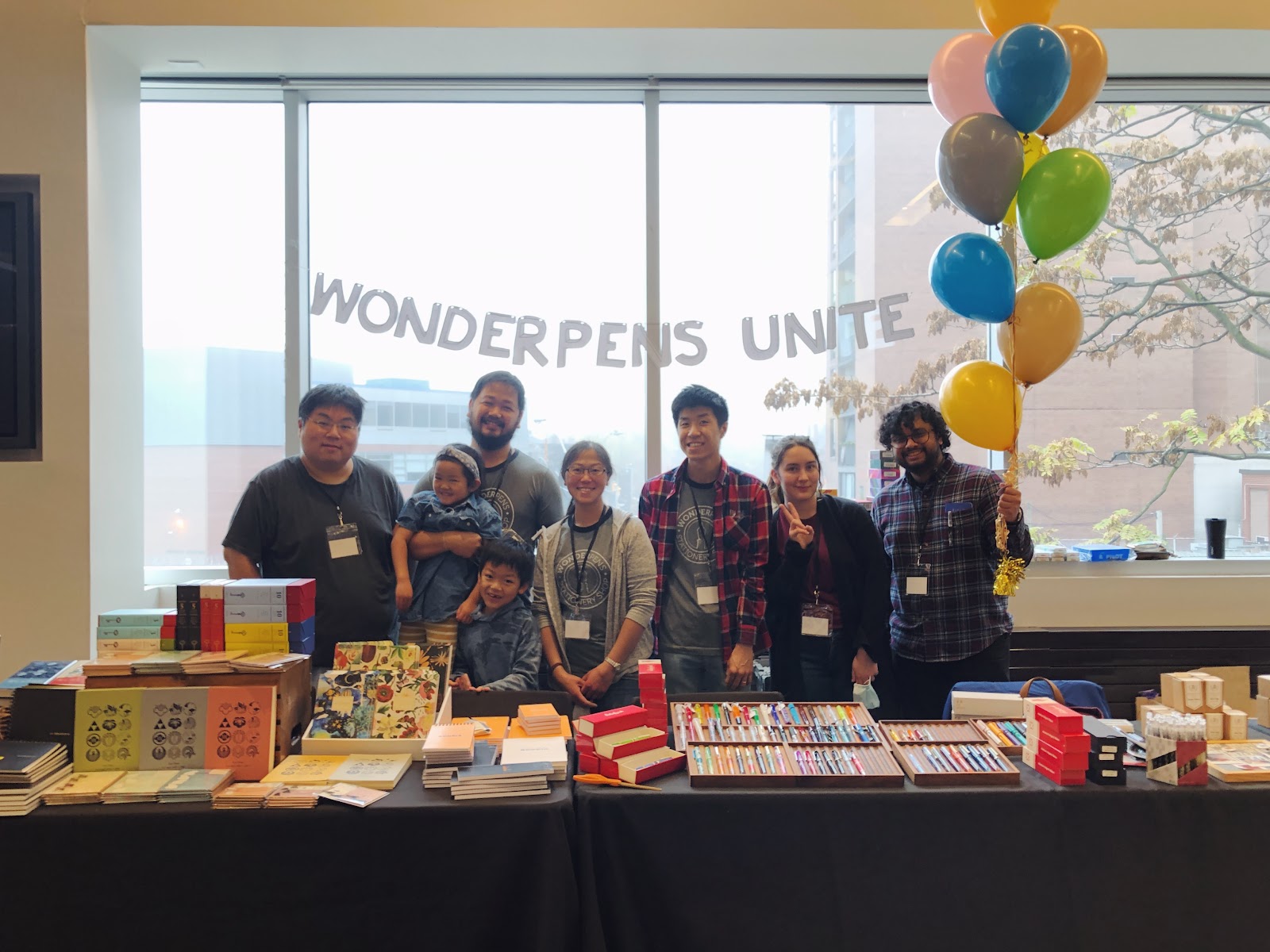 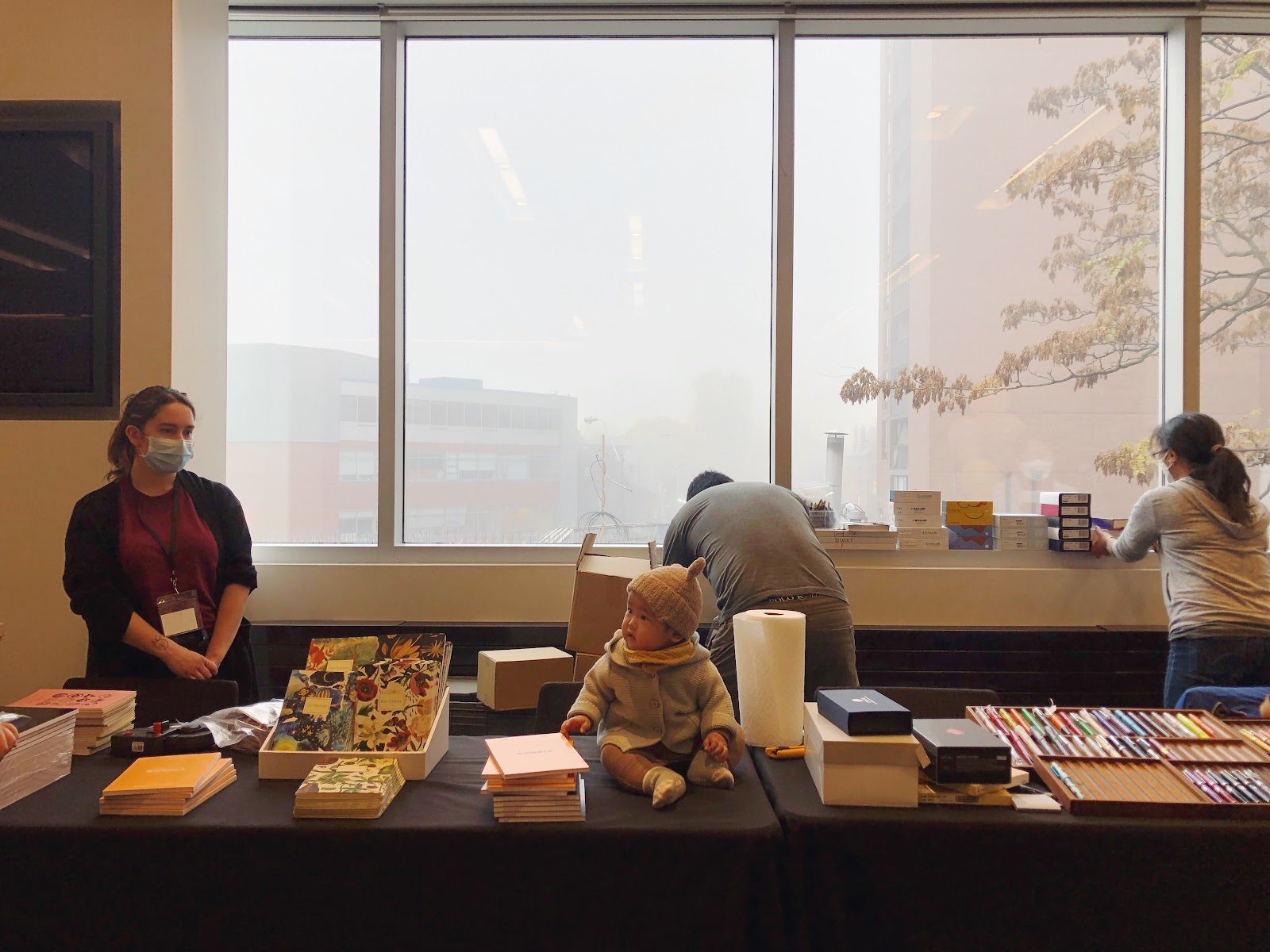 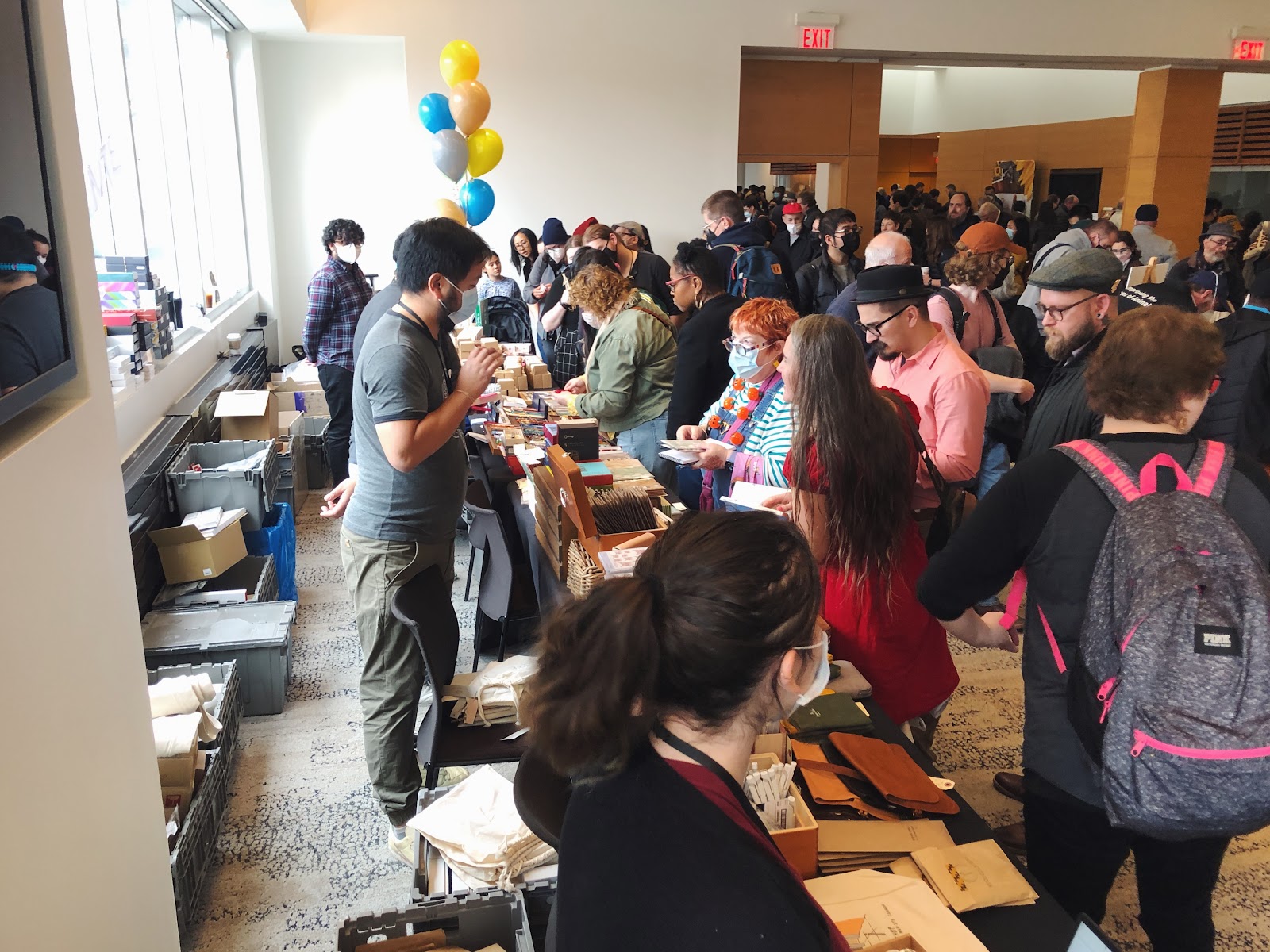 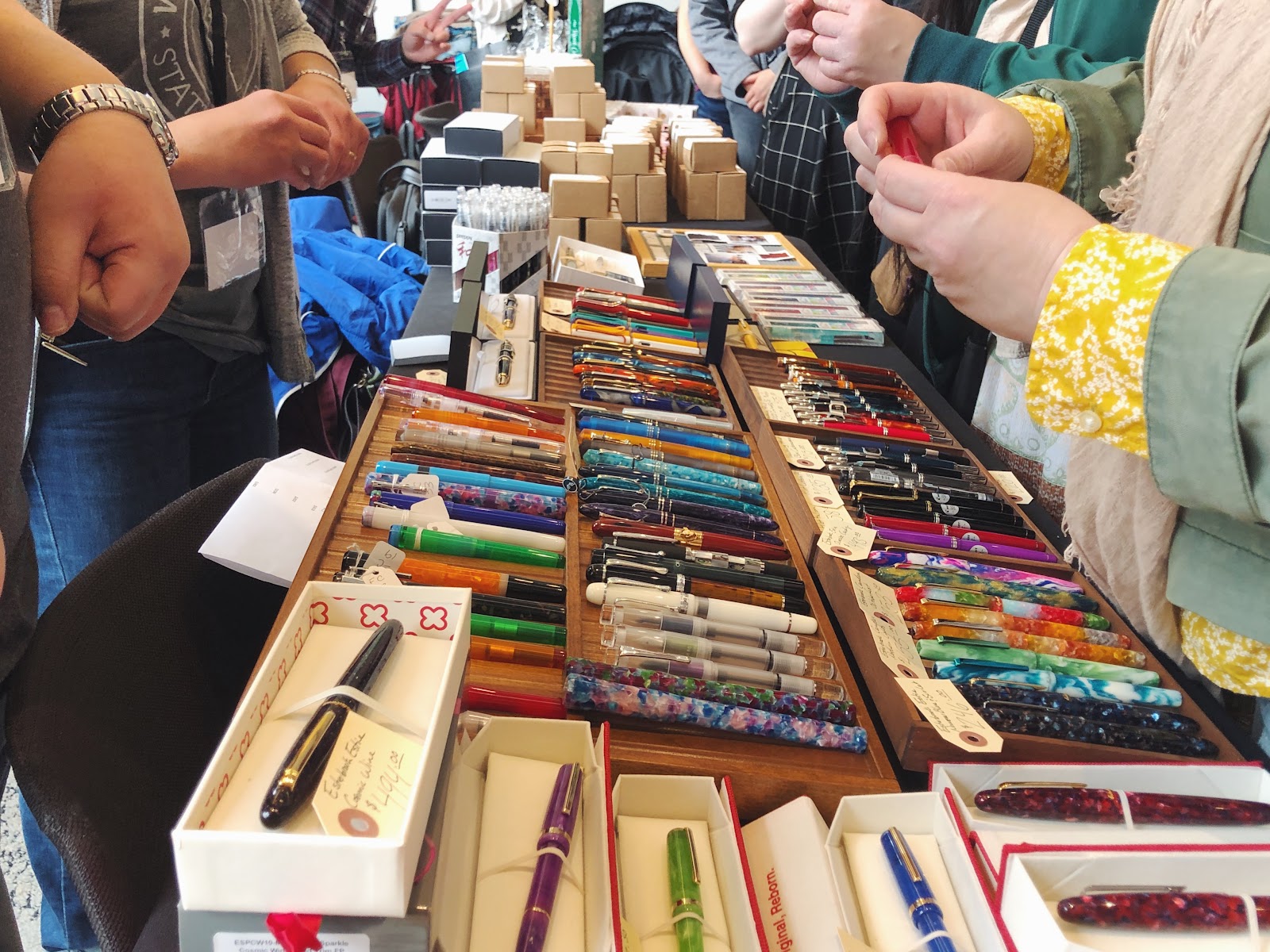 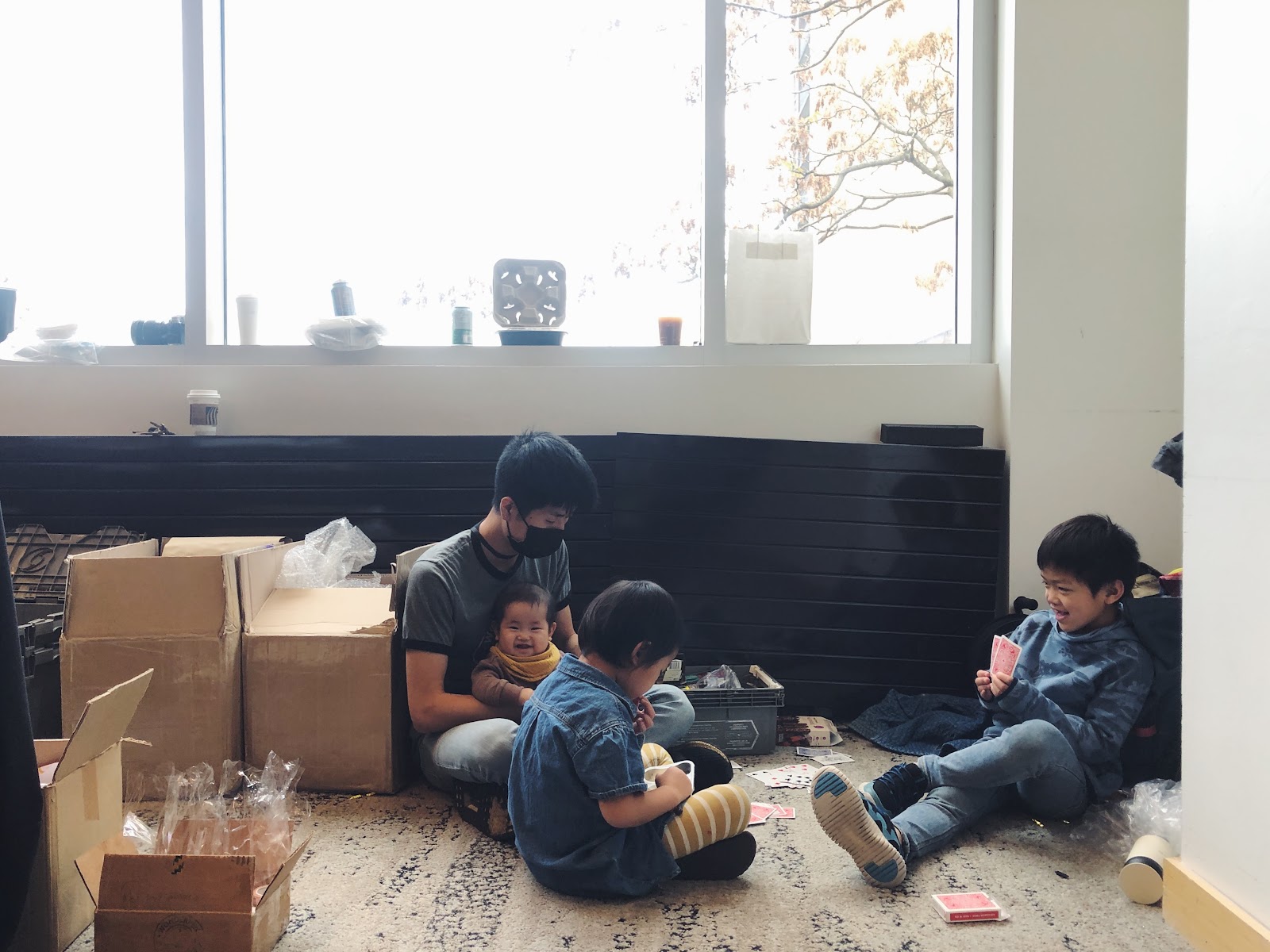 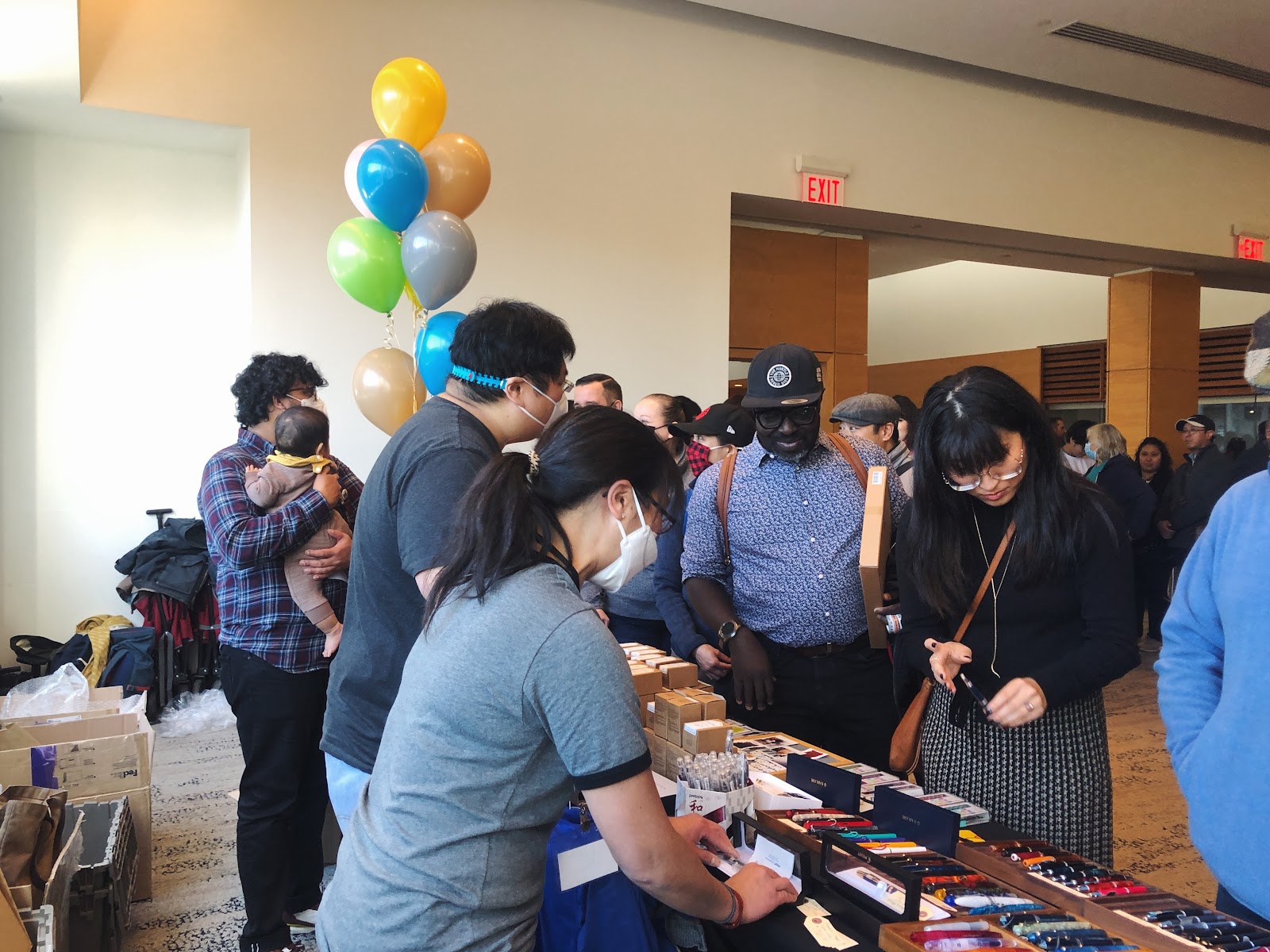 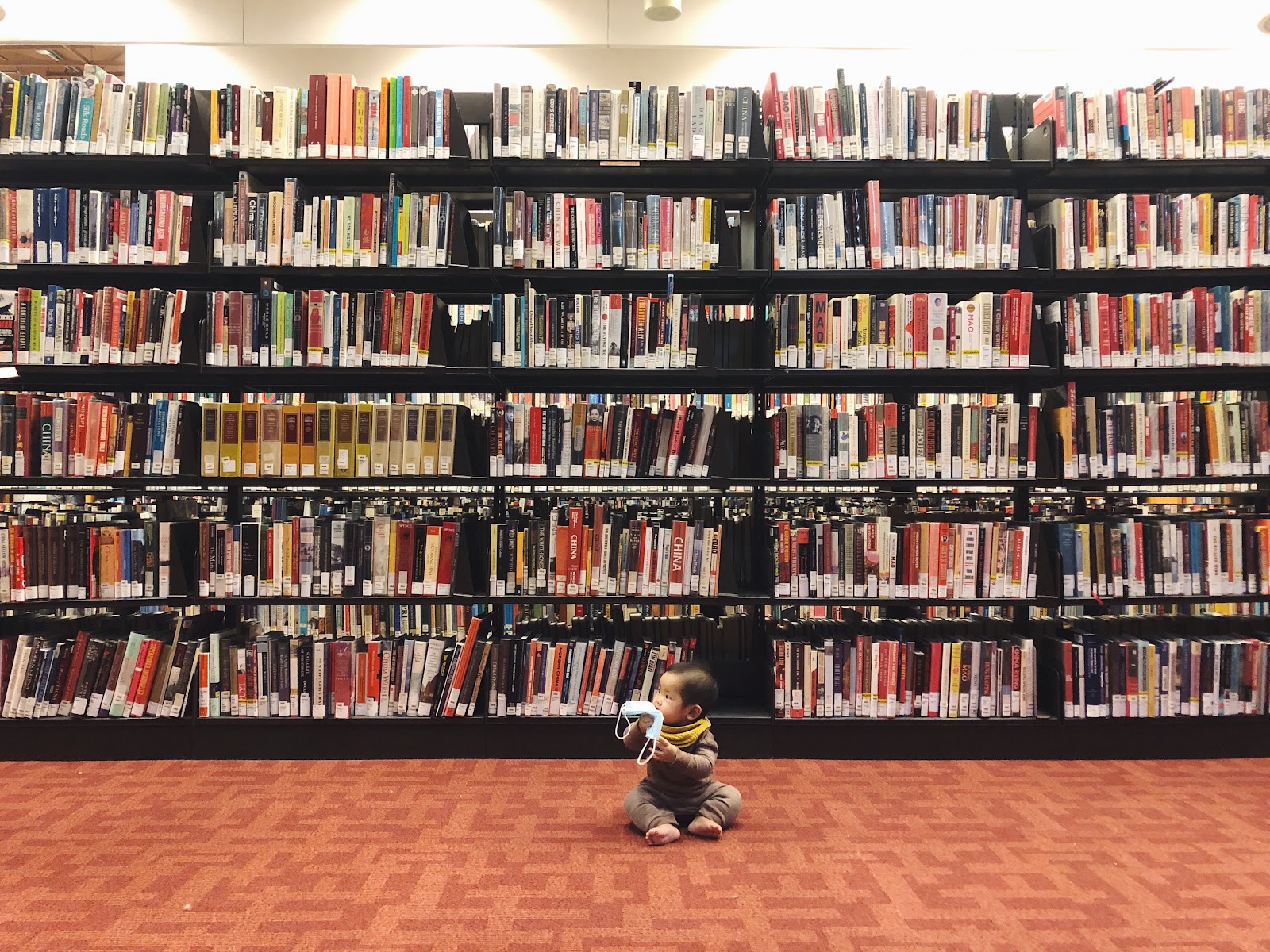 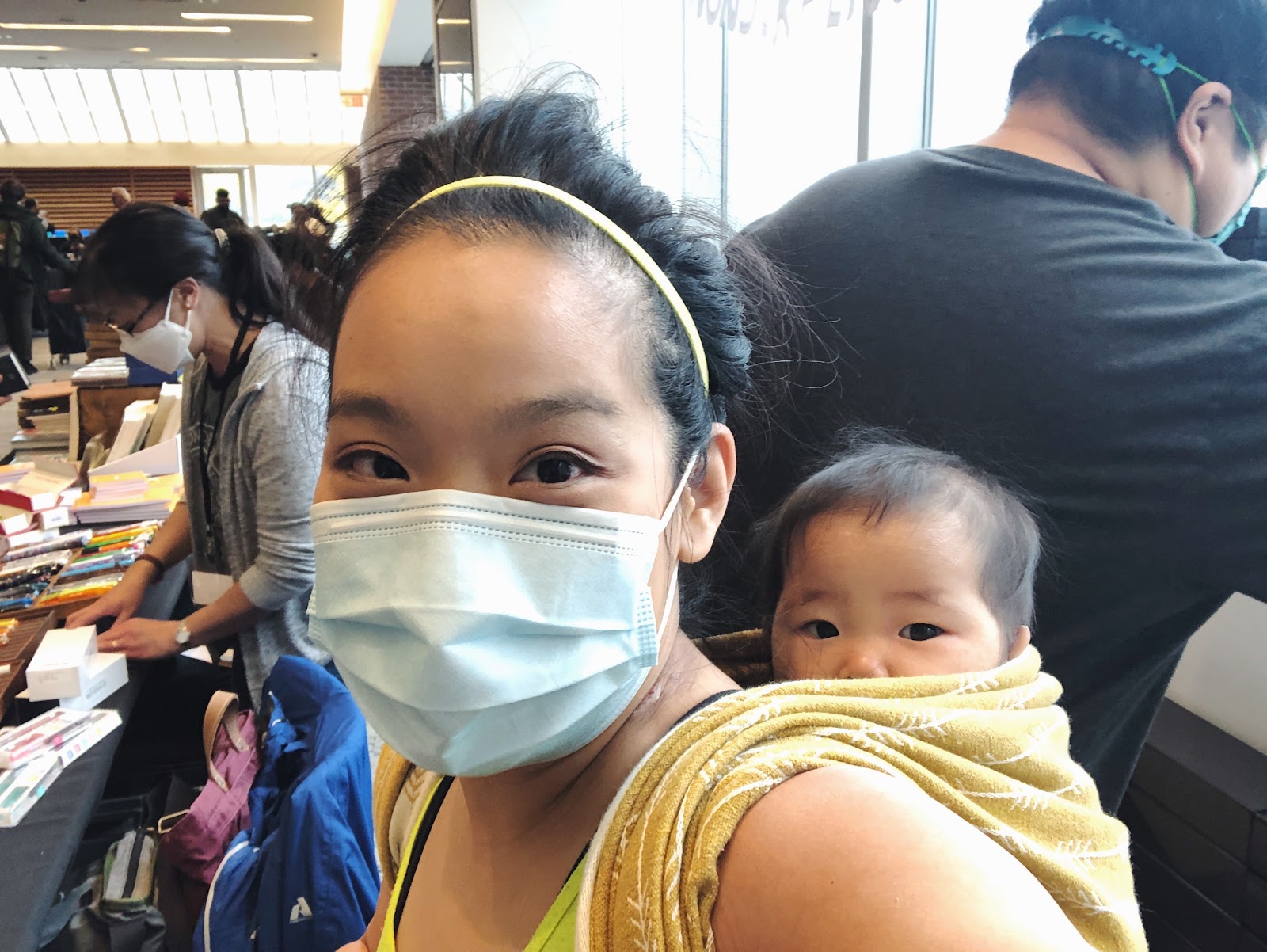 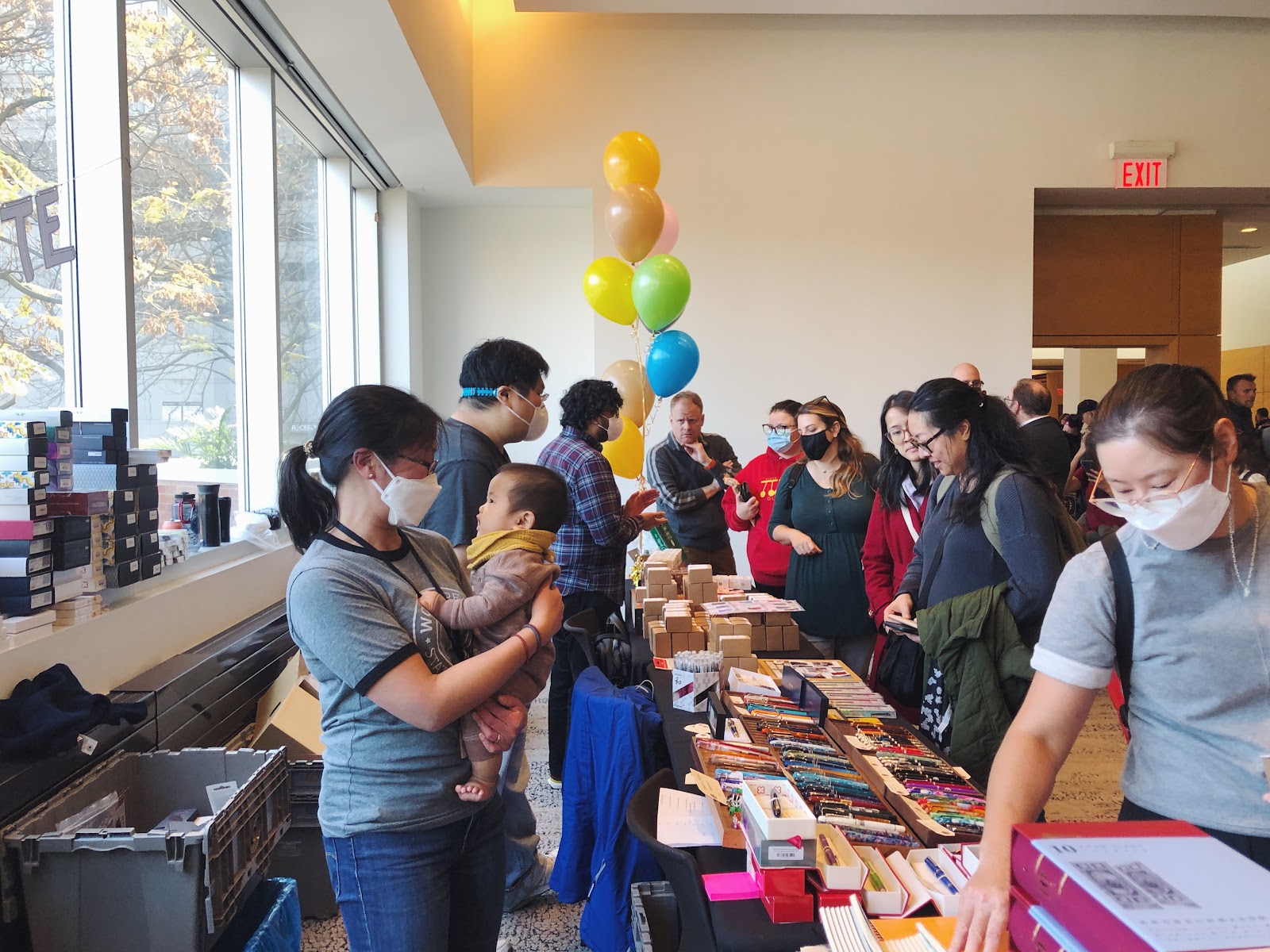 In any case, it was an adventure and a day-long adrenaline rush and we didn’t forget any of the kids at the library and no one cried (well, maybe a little).

The real thrill was to see so many familiar faces again, and to meet some people in person for the first time. Lots of people, actually, who had discovered pens over Covid, or who moved into the city, or who connected with us over social media but who I’d just never had the chance to run into. Many people gracious about typos in the newsletter, many people who said they’ve been following Chicken and Tuna’s love story. Grateful that, even in this day and age, people are lining up to take a look at new pens and supplies and notebooks to help them make sense of this world. 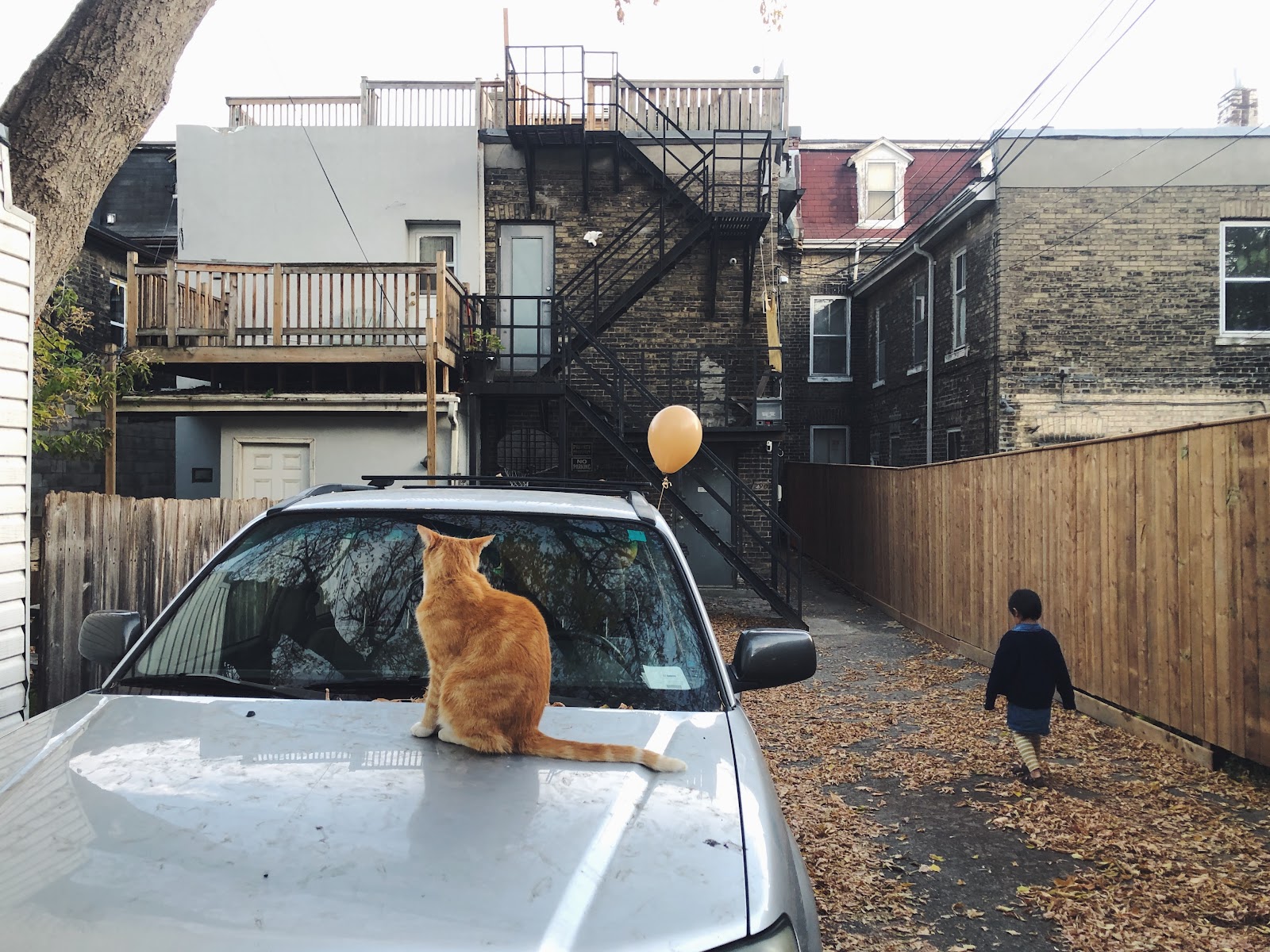 One of the big flaws of waiting so long to do blog posts like this is that everything is a haze, your memory becomes a bit furry—furrier than usual. I do remember that Brendan assigned me to bring some pen cups from the studio shop and I did not, and everyone pretended like it was only a minor inconvenience. I also recall the very tight production and shipping timelines for the new inks, trying to get the Dominant Industry inks in time for the show—they arrived the Friday before the show, to everyone’s huge relief. Although really at the time that they arrived, we weren’t even sure if they would do well, if people would like the colours, or even like inks inspired by two disgruntled shop cat and a moderately successful stationery shop in Toronto, Jon wondering if we’d bet too big on one cranky ginger and one terminal grey. Also I recall that I think you weren’t allowed to be out in the stacks before the library opened (the show started in the Appel Salon in the morning, before the library itself opened), but I was nursing the baby, looking for a bit of quiet. A security guard came to kick me out but I think I embarrassed him with my boob, and he ran away, which is a win I will take.

These days, I return to my resolution to be more timely with the blog, and digging through my various drafts in an effort to Get Things Done, I recalled that I had never posted about our Scriptus weekend. Despite being several months late, I still thought I’d post. It’s nice to be reminded of stationery adventures, it’s nice to share how things go on behind the scenes, or maybe if you aren’t local, what the show might be like. I also love that the blog is, in its own way, a record of our moderately successful stationery shop, its disgruntled cats, its disorganized and chaotic preparations for local events. I love looking back on what we did and how we did it and all the people in our orbits. What a ride it’s been. 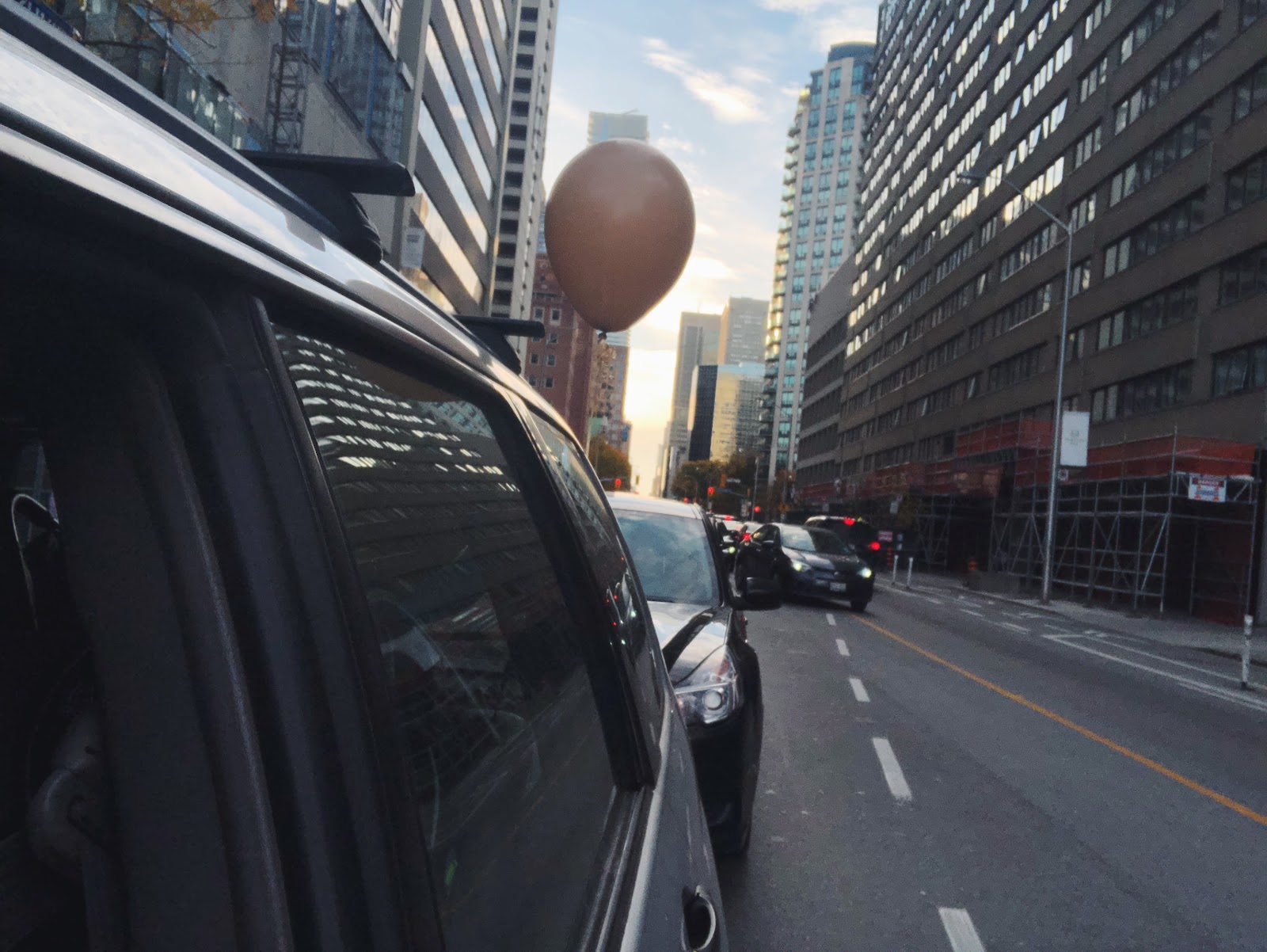