Getting the Office Ready 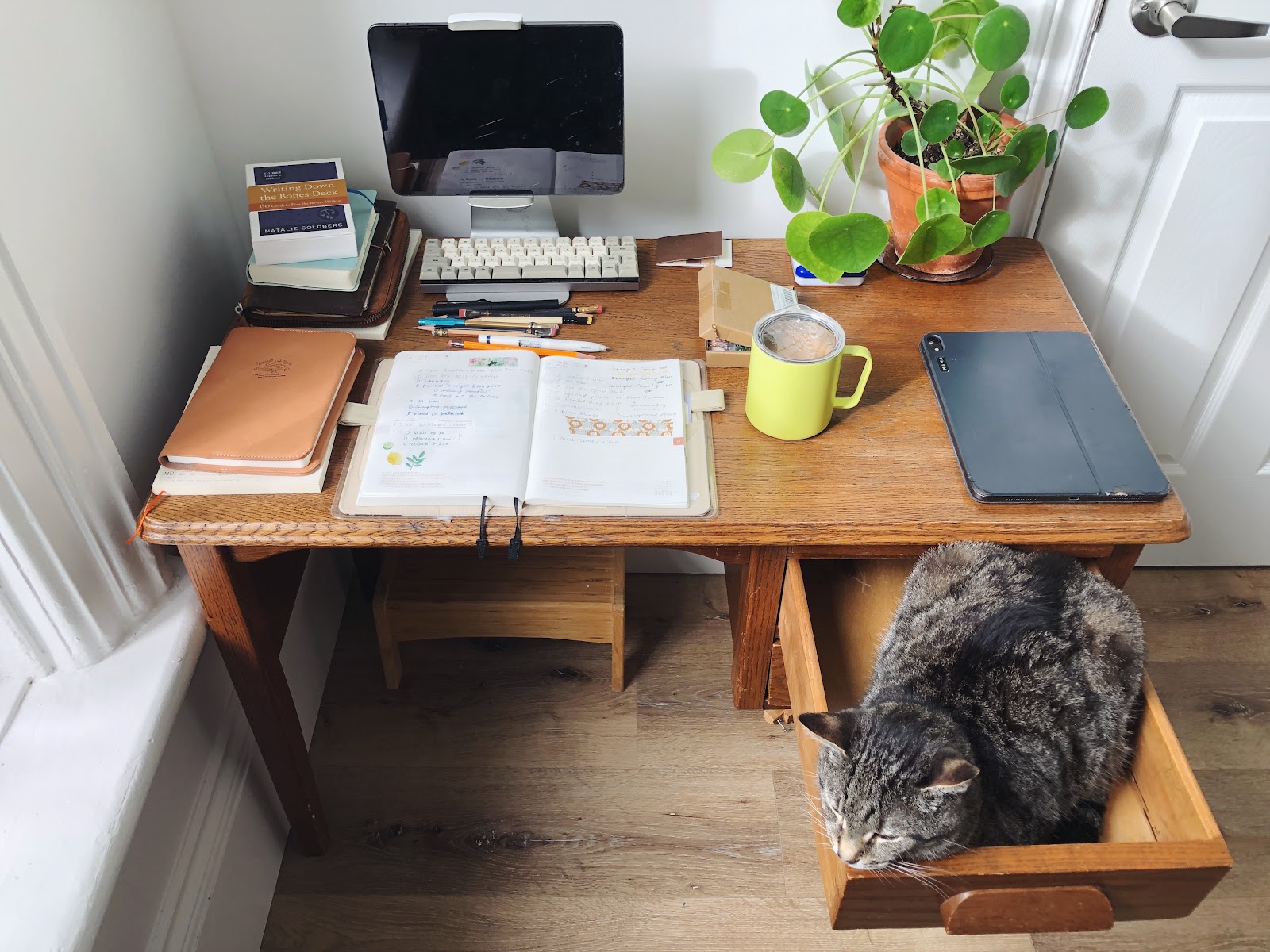 I hope you have for yourself a fresh start in some shape or form.

For the last several months, I’ve been moving into and setting up my office. It’s been a delight! Over the last 15+ years I’ve been in Toronto (I’m a Hamilton native, and went to school in Kingston before moving to Toronto as a teacher), I’ve moved a dozen times from one end of the city to the other, each time with more boxes of books, more children, more stationery, and I’ve never had an office. We’ve lived in pretty unusual set-ups, with various levels of making-do, weird sleeping arrangements and kitchens without cupboards and kids tucked into closets.

But now, at long last, with the renovation, I have what is essentially a glorified closet—the glory being at least a window. With Toronto real estate being what it is, I will take it, even if it did lop off a sizeable chunk of the master bedroom. A room of one’s own to contain the various accouterments of one’s stationery hoarding.

It was in fact one of the biggest pieces behind launching the journal club, having a place to run it from. And so sometime last year we finally got the door on it, launched the club, and since then I’ve been moving in. Futzing around with all of my stationery, doing some decluttering which has mostly consisted of moving things around, admiring things I’d forgotten I had in the first place. Earmarking things to be used in various orders, loose sheets of correspondence stationery put together in a pile and then another pile.

Some months ago, when I first started moving in, I took some pictures before all the rest of my books and stationery began to take over, like a swarm of locusts. I was scrolling back and rediscovered these photos, the paint still tacky, my first journal club sessions in the books, and still remember my glee at having this space for myself.

Since then shelves have gone up and been loaded up with books, I’ve hung up (“hung up” meaning used some washi tape to affix them to the wall) the portraits of Chicken and Tuna painted by Kat Trovato, and I’ve stacked up a few bins of stationery against the walls. More to come, but for now just sharing and celebrating this tiny part of the journey. 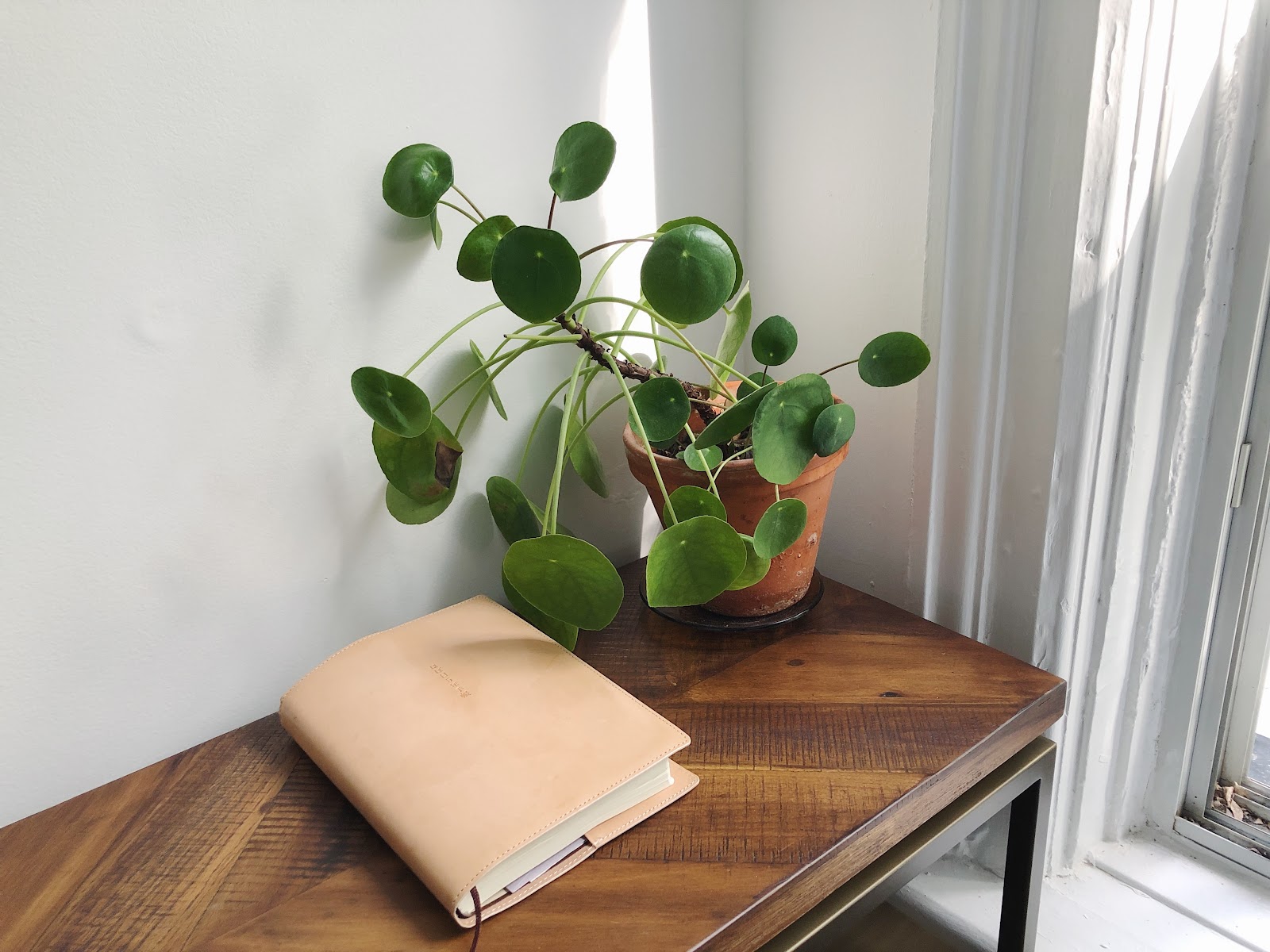 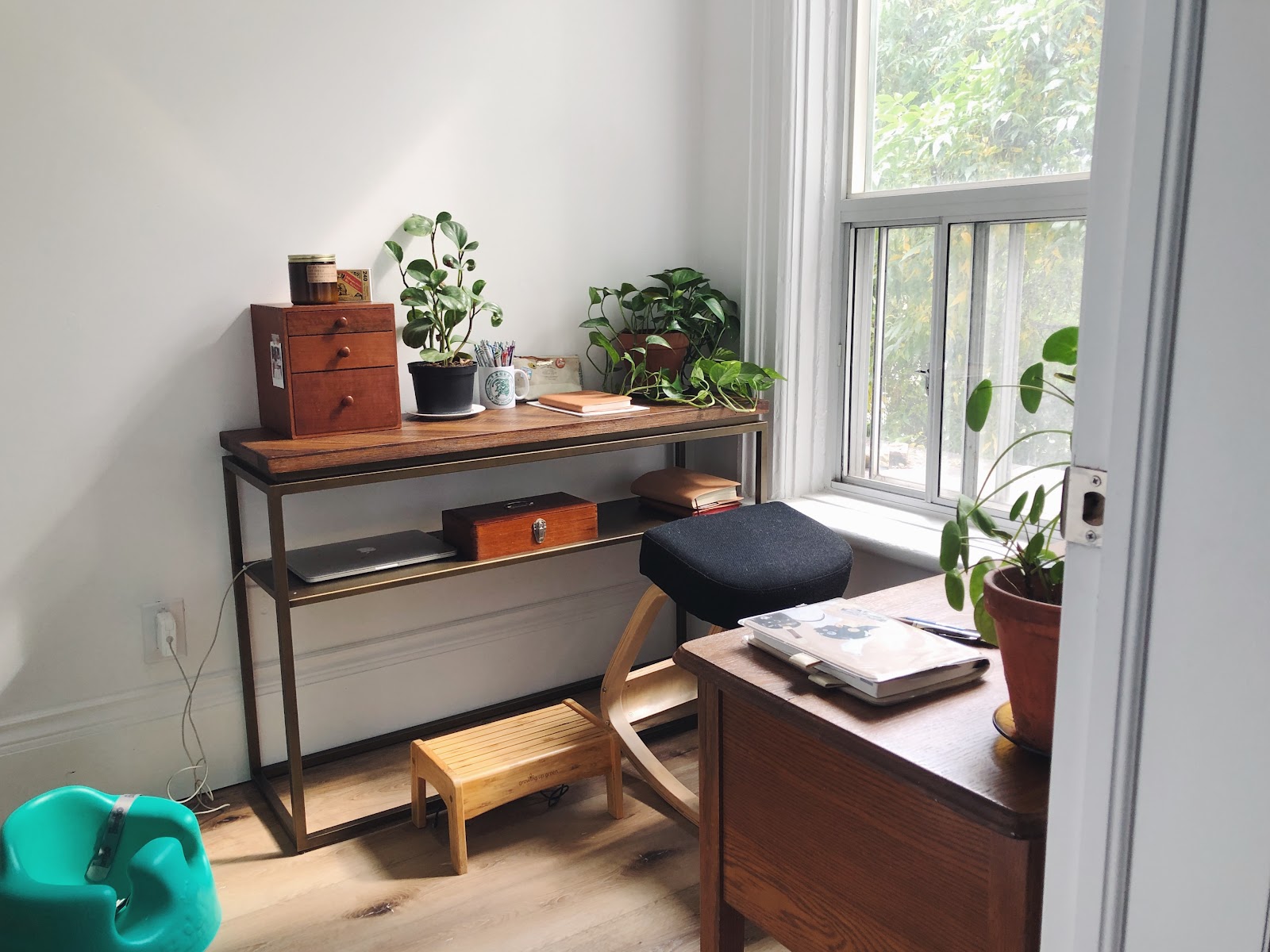 And these two photos of the baby! The photos are so similar, but actually from two different days, her in her seat behind me, me at my desk. A complete joy. She looks a bit goofy here but actually she is on the serious side, always watching, curious, eager for affection. Different days will give me wildly varying amounts of time where she can sit on her own, and these days she’s now sitting independently, moving around a bit, and entertaining herself with scraps of paper. 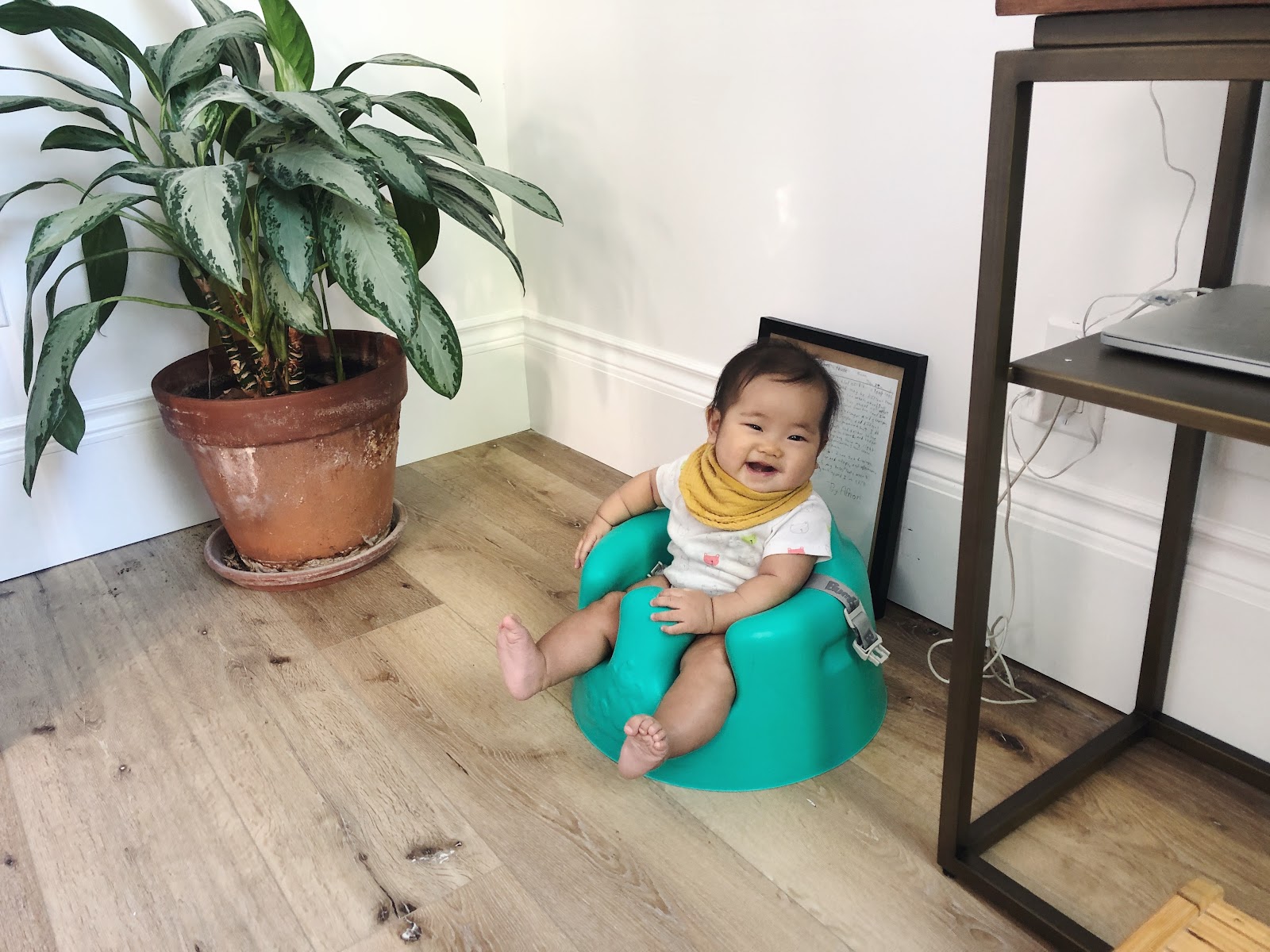 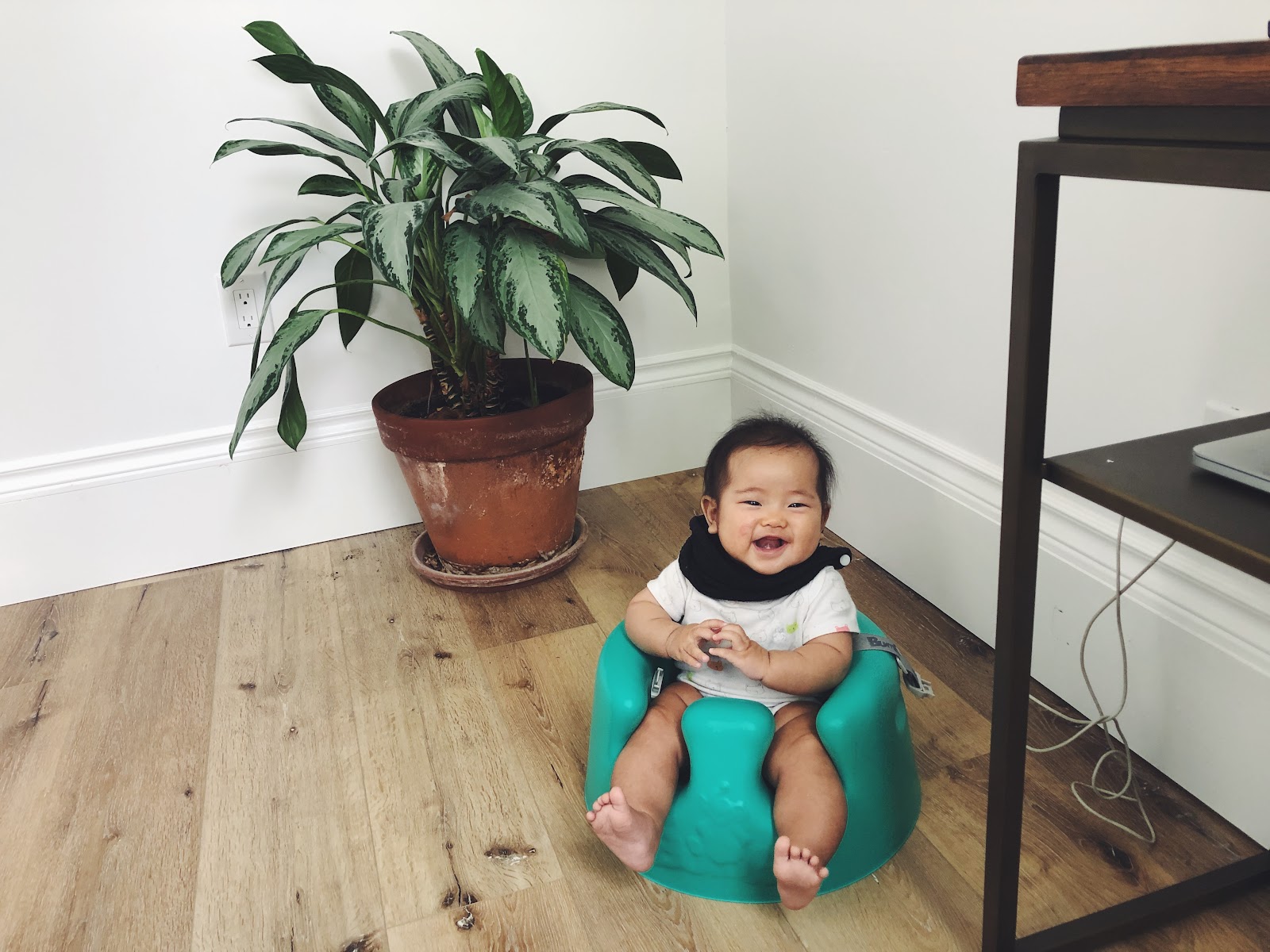 Jon and I have this unfortunate tendency to always bump things down the line—when all the kids are in school, when Caleb can walk home from school by himself, when the kids have all left the house—and while there’s an element of truth to that, the limits of how much time you have in any given season, sometimes you just have to plunge forward and hope for the best. On the one hand, living through a renovation with the new baby and the two wild chickens (Caleb and Naomi) and the actual Chicken and his good friend Tuna was a bit bananas, the house renovations, this phase at least, are basically done, and I close my eyes to the flashbacks of sleeping on the floor with the open studs and plywood over holes in the walls meant for windows that took four months to come in. Whenever I think to myself life is moving too fast, the babies are growing up, the weeks are flying by, the seasons are swarming me, I need to slow down, develop a meditation practice or something, I remember that we’ve been doing this renovation for five years, and time does indeed have the ability to move slowly, and in fact, sometimes even backwards.

In any case, renovation wrapped up, we are also en route to wrapping up the holidays around here. That’s it, I declare, we are tucking away Santa for a year. The Christmas tree has been denuded and now sits, admittedly still in its stand, out on the deck, waiting for someone to schlep it out to the curb. No more Christmas movies, break out the math books, says this tiger mama, channeling the Trunchbull.

Over the weekend we went over to someone’s house for dinner and they still had their Christmas lights and decorations and tree up. Caleb looked at me, accusingly, and said, “they still have the Christmas spirit.” 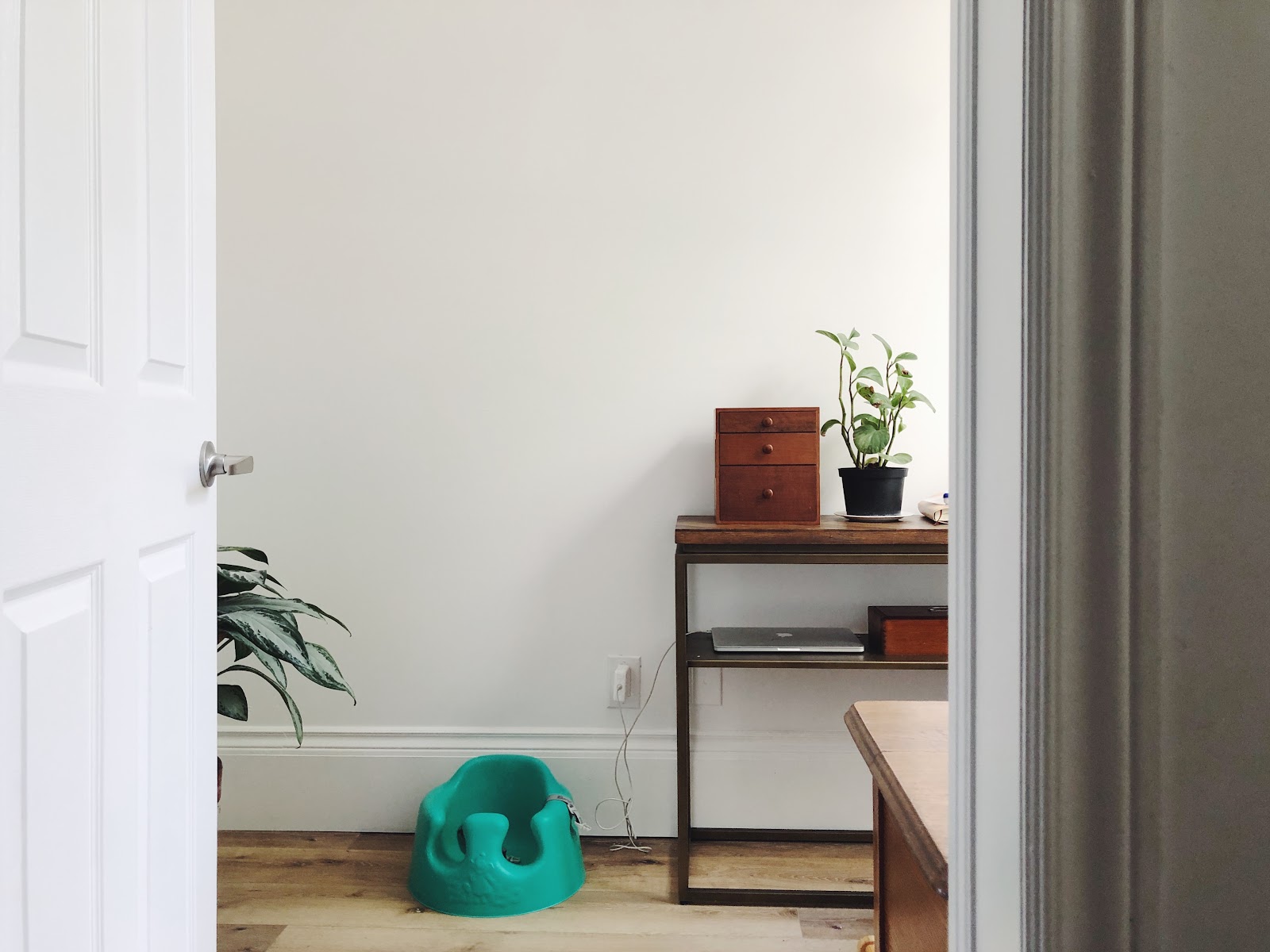 Ohh I love your writing/reading nook! How do you like the chair? I’m thinking about getting one…