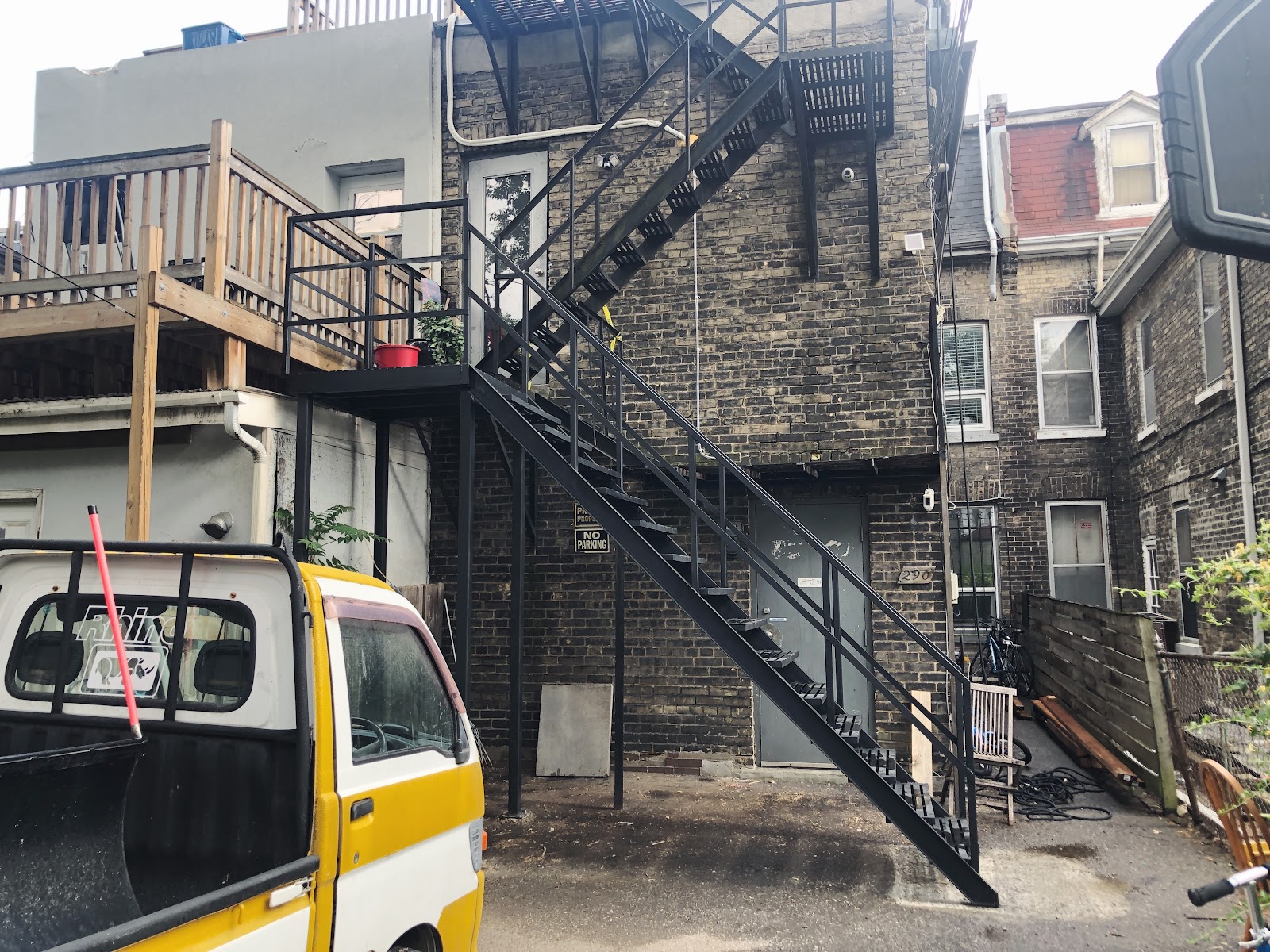 We recently had to get some pretty substantial structural work done on the fire escape, which was and still is one of my favourite features of this building, adding to the heart and soul and character and age of it. Jason, the architect, pointed out that the fire escape is a relatively new addition according to Google Earth (count on your architect to know your building better than you), so maybe not necessarily a historic part of the building. Regardless, and even though it’s rusty and rickety and sloping,  it’s one of my favourite places to be, to read, to eat, to watch the kids, to find the cat.

The work itself, at the end of June, was a bit disruptive to virtual school, but no more so than, say, dust motes in the air; the truly heart-breaking part of it all was that they were going to have to take out the landing where I spend most of my time. The kids and I eat lunch out here during the day, I send them out here with snacks, I read here in the waning sun. 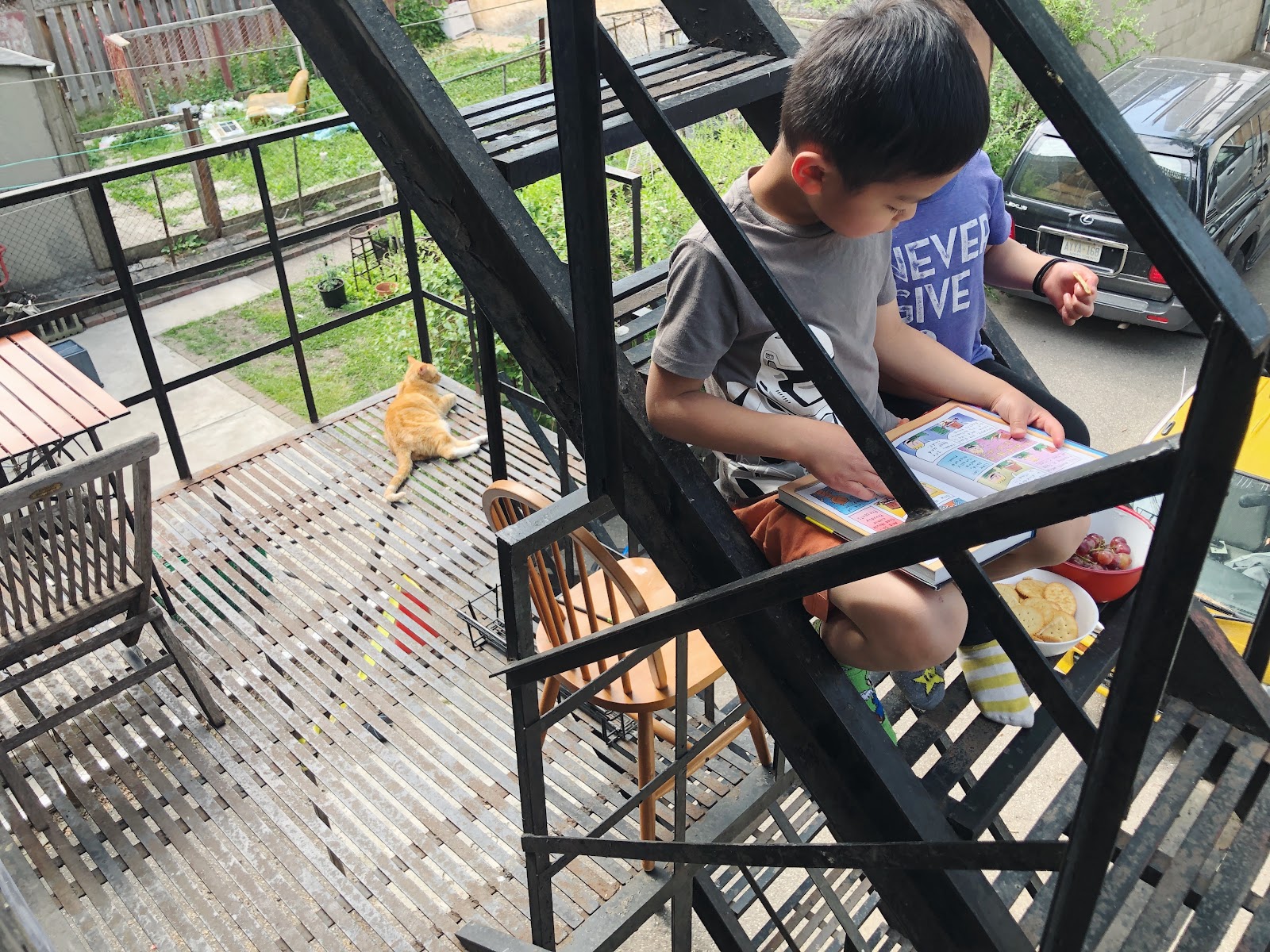 The lower landing where the cat is, was going to have to be taken out entirely, and I was crushed, emotionally demolished by the whole thing, in disbelief that we could even consider this travesty, much less actually pay for it to happen.

Jon accused me of such heinous crimes as being unreasonable, being overly sentimental, not understanding the costs of things, not thinking about some mythical “long game,” impeding the consultations by my non-participation in the whole thing, impeding construction by parking the car in the backyard blocking the contractors’ trucks, emotionally blackmailing him into hijacking the cost, not paying attention to him when he described the plans in the first place, passive aggressively writing the children’s name in the wet concrete, and being mopey. 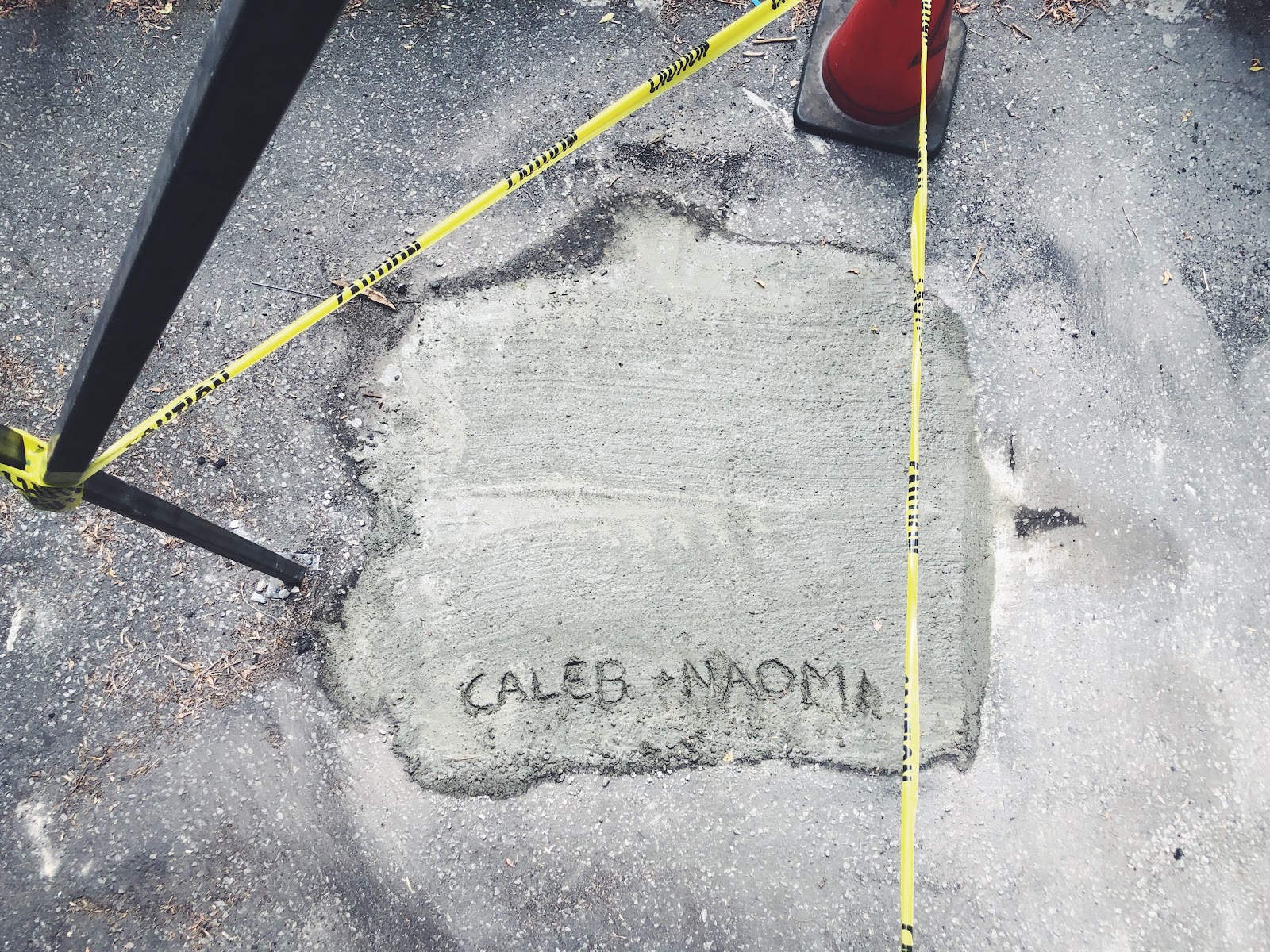 This story ends beautifully though, which is not how most (any?) of my stories seem to end.

At the 11th hour, literally as they were cutting off the railing to the balcony, hanging off ladders, wires dangling everywhere, sharp cutting instruments making motions in the air, Caleb and I moped ourselves out of the kitchen door, and to my shock, the nicest welders in the world agreed to keep the back half of this new balcony hanging off the wall. They would finish up the stairs, but keep just this back part as a little island for a table and chairs and all of the reading and watching we could dream of.

They came by a week later, and dug new footings and installed a new railing and other things to make it structurally sound. Here they are, sitting on my new island, welding on a railing. 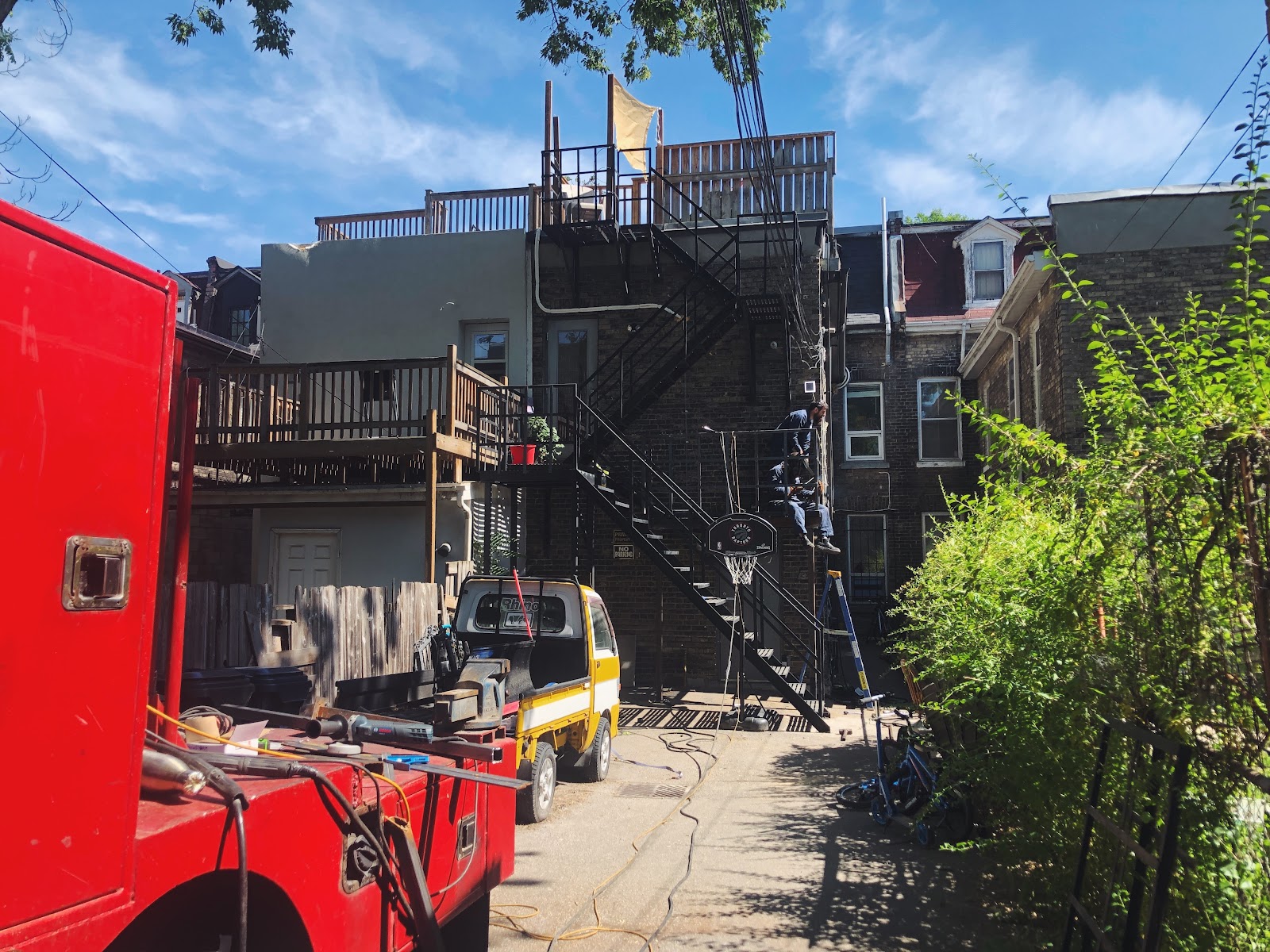 These contractors now hold a special place in our backyard. They saved the fire escape! And they were also really nice. Out of all the contractors Jon has had over the years, and there have been a lot, various plumbers and electricians and vent people and wood people and kitchen people, they are, to my recollection, the only ones that ever closed the gate to the backyard after themselves. That sort of makes it seem like a low bar, like putting the toilet seat down, but most contractors don’t think to close the gate because it’s not their job. So when someone does, saved fire escape or not, it’s memorable and thoughtful and courteous and just very nice. They were all also extremely bearded, and Naomi asked if you had to have a beard to work with them. 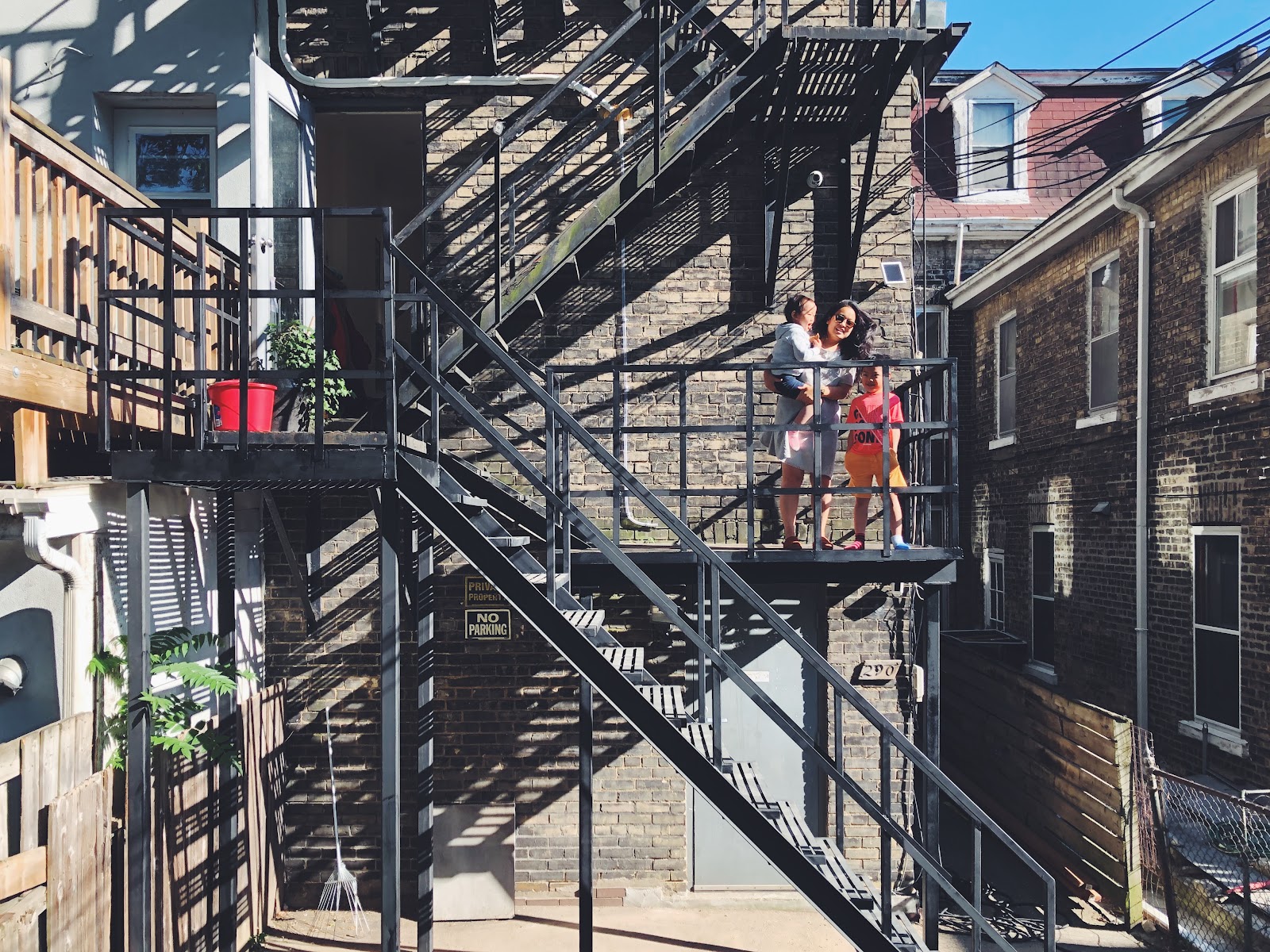 In any case, I now have my tiny island. 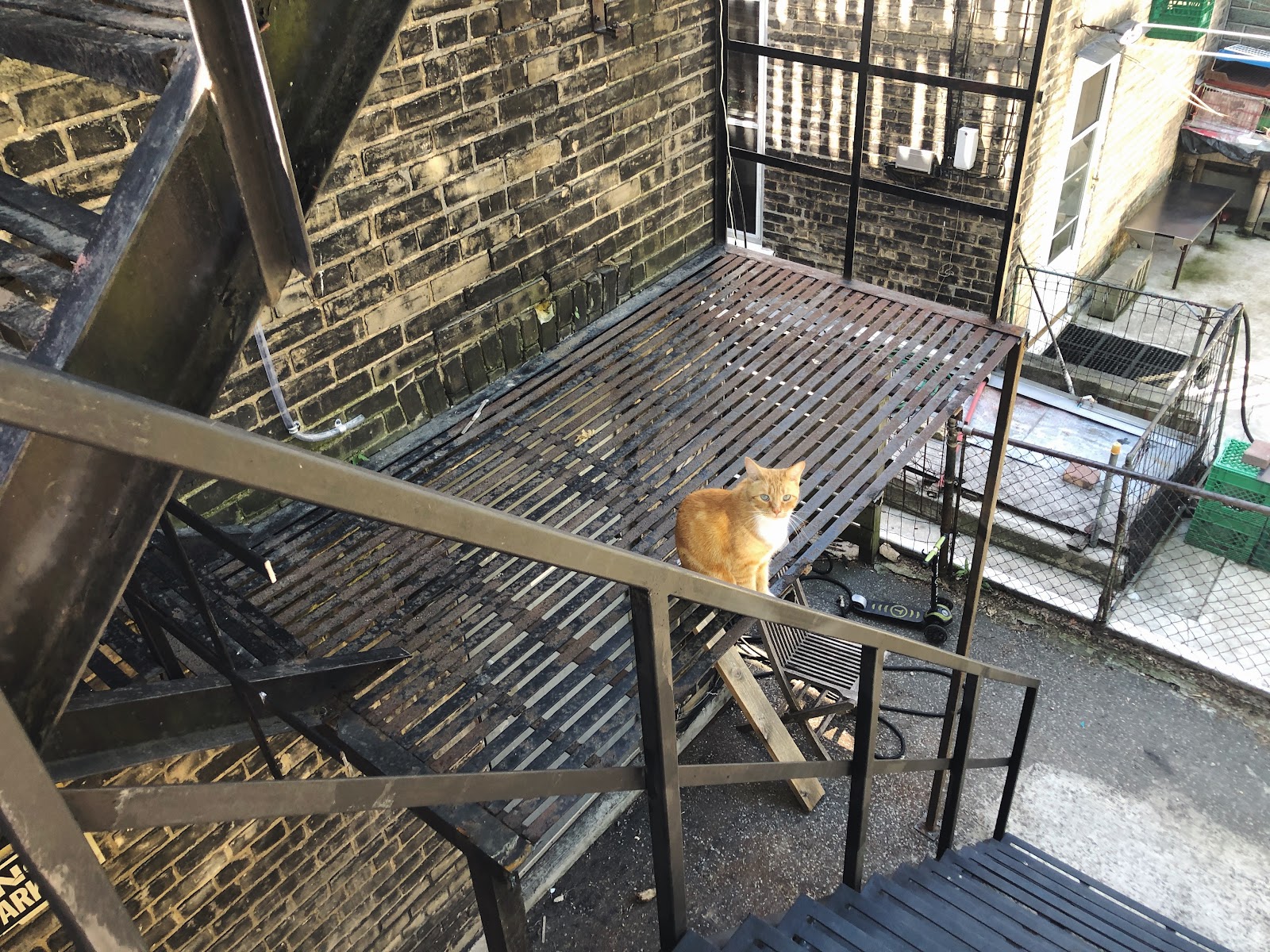 The only creature proud of me in the three weeks of emotional upheaval leading up to this.

Oh, I love your writing.
I live in Toronto, too. What can I say? In these big cities, outdoor space, private space not looked upon by many, secret spaces, hiding spaces, and tree houses( this is an urban tree house with no tree, isn’t it?) ARE EVERYTHING.