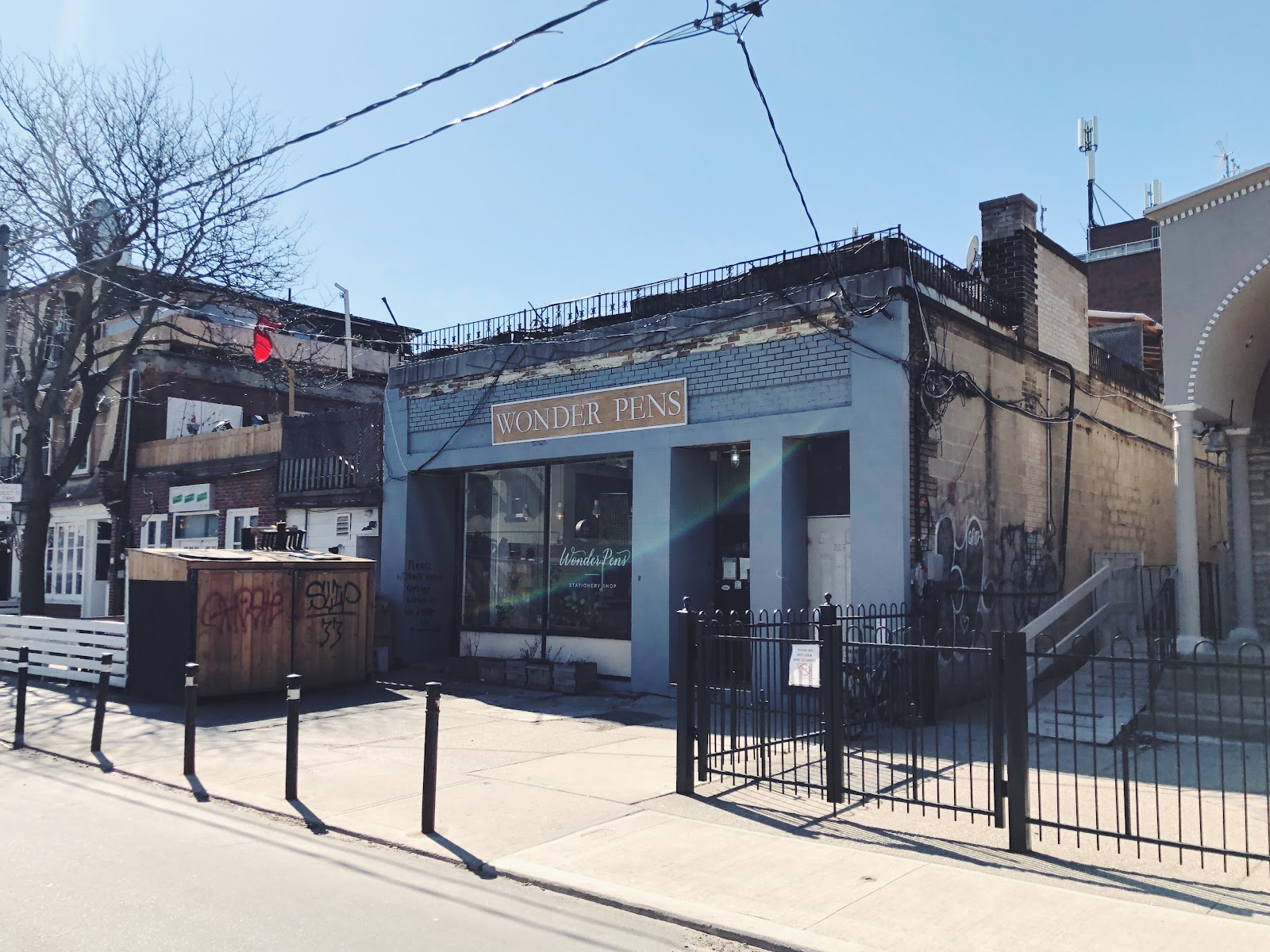 This is our shop! Still standing. Graffiti on our broken garbage hut and on the side of our building, at least a sign of life. There’s supposed to be a lock on the garbage hut doors, behind which are the bins, inside of which you’re supposed to place your garbage, but the lock hinge is broken. The other day I watched someone open the wooden doors and literally fling his dog poop bag directly into the shack. I knocked at the window in shock, small, angry Chinese lady, hair disheveled and brow furrowed, and he ran away with his dog.

That’s neither here nor there, I suppose. As a shop, we are still standing, and things are moving along. It’s been a long time since I did a giveaway on Instagram, mostly because I still get flashbacks from how complicated it is and how intense people are about free stationery, but we ran one a couple of weeks ago. While it was going on, I spent several hours—I’m not even joking, several hours—watching YouTube videos and eating chocolate and trying to find apps that were going to assist me in running this giveaway on Instagram and then trying to connect the IG to our basically defunct Facebook page in order to use this app. It sounds like a horrible way to spend several hours because it was. I tried to rope Jon into helping me but he was busy trying to FedEx something from Japan and was heartless and totally unsympathetic to my plight and refused to take my calls. I see these other small businesses who have computer-literate children who help them run their websites and take photos, and at this point, Caleb probably would have figured it all out faster than me. Social media is an enormous beast that seems to grow bigger and more heads and scales and snake hairs every day, and yet here I am, also tremendously grateful for the fact that its presence has really allowed our business to stay alive. It’s both.

I mostly feel winded from the massive leaps technology and the internet have taken while I had my head in the sand over the last decade. Technology is very complicated, with clouds and drives and folders and the occasional cracked screen. I think at a certain point I called it a day and said everything is going to move on without me, and that’s fine here I am alone on my island of fountain pens and also of not understanding the world just leave me with some salt and vinegar chips. And then a pandemic came along and it turned out that it wasn’t going to be fine for me to just sit alone on my island. I am navigating it all very clumsily. I read online advice about hiring a social media manager or getting apps or developing a content strategy or a marketing plan and I feel as though our surprisingly high numbers belie the wholesale lack of comprehensive direction that our social media team has going on, our social media team being made up of me and the cat.

For us, the biggest shift the pandemic has had in moving us all online is adjusting to the new ways and limits of communicating. The odd time I rise to the challenge, but mostly I lament, unable to figure things out. How do you explain—what’s going on? We used to have those in-person, human interactions that undergirded the whole thrust of this thing, people stopping by to browse at their own pace, to see all the new things, to ask questions, people in the shop talking to people and helping people and making their funny jokes or maybe making jokes that aren’t so funny but that’s okay. We hung out a shingle. We admired ink swabs in person, or tried out pens. We pet the shop cat.

Jon and the team are keeping things rolling on wheels with the website, including the big migration last fall, and still I’m always discovering and impressed by their tweaks and improvements and big and small changes. How swiftly they’ve set up and gotten the curbside pick up ready and running. They are manning the live chat and the phone and the email and I’m always amazed at everything they do and how they manage to keep things humming. But for me, a year in and I’m still trying to get comfortable managing our social media, which, unfortunately and ironically, is my tiny kingdom to rule. 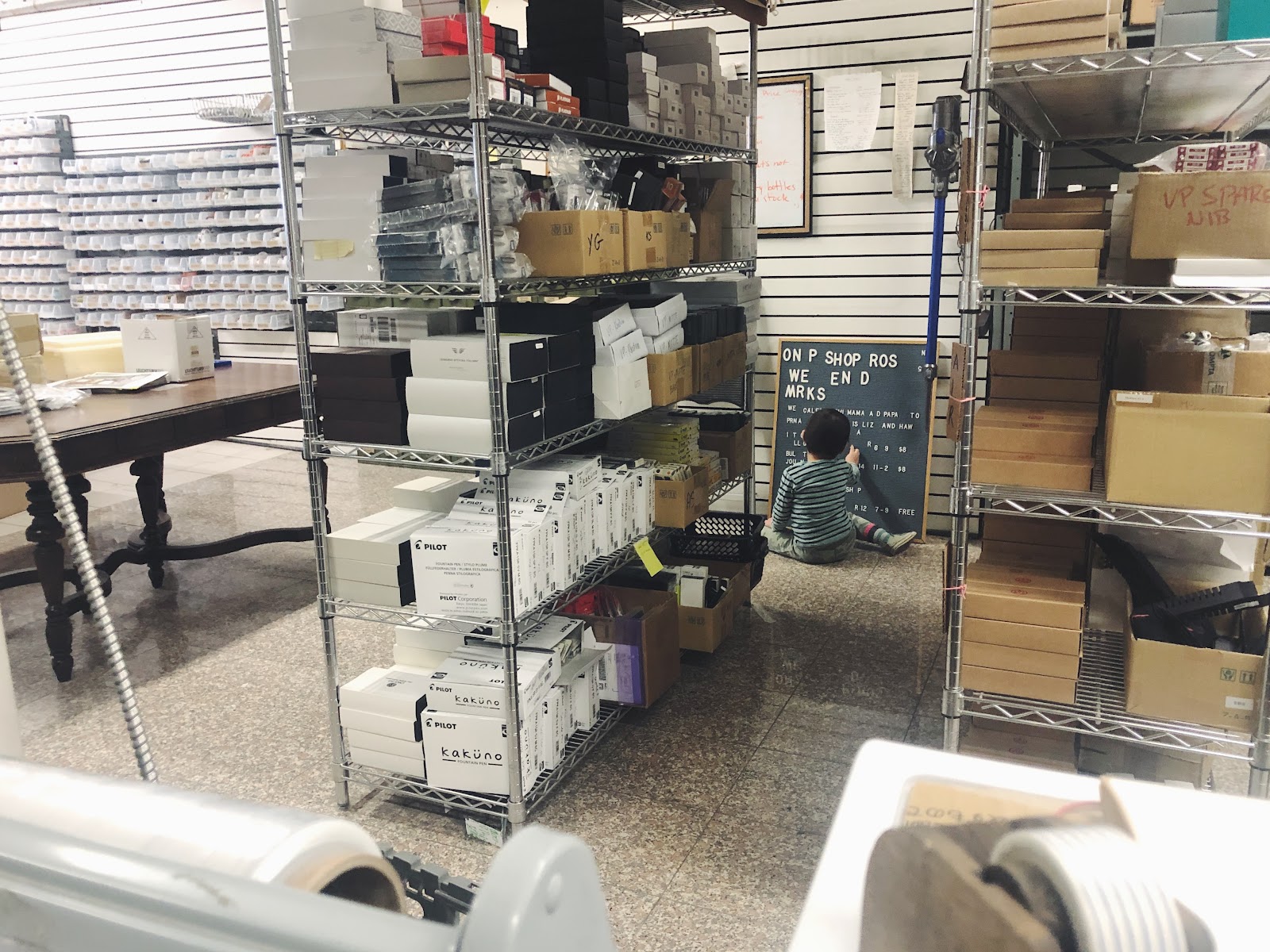 A year in, and I suppose I’m now getting settled. It’s a work in progress, and I’m getting into the swing of things, taking photos when the cat is in the right spot, trying to organize blog posts or Instagram posts and work efficiently around the timing of shipments coming in, rather than belatedly posting something after it’s all sold out. We are grateful that we’ve had a bit of a runway to figure things out before the pandemic hit and now we’re flying by the seat of our pants and we’re making it through to the other side through sheer momentum it seems, third wave or not. Our story still goes on.

And I guess if the issue I have at hand to whinge on about is irresponsible dog ownership by our neighbours, the shining fact remains that we are still here, life has not crunched us under yet. We got into this for the love of stationery and the curiosity of taking a different path in life than the one we started out on, and has it ever turned out to be an adventure. The social media part is still a beast, most days, but it is a gift to be able to share the inks that I’m using, how my Traveler’s Notebook is getting worn in, what books I’m reading, family life, shop life. To think about what I’m sharing and how and why. We will take the sunny skies and we will take people at our window making hand gestures about what they’d like to see and we will take the emergency chocolate bars and we will take all of this and I am very much looking forward to seeing you in our shop again one day soon. 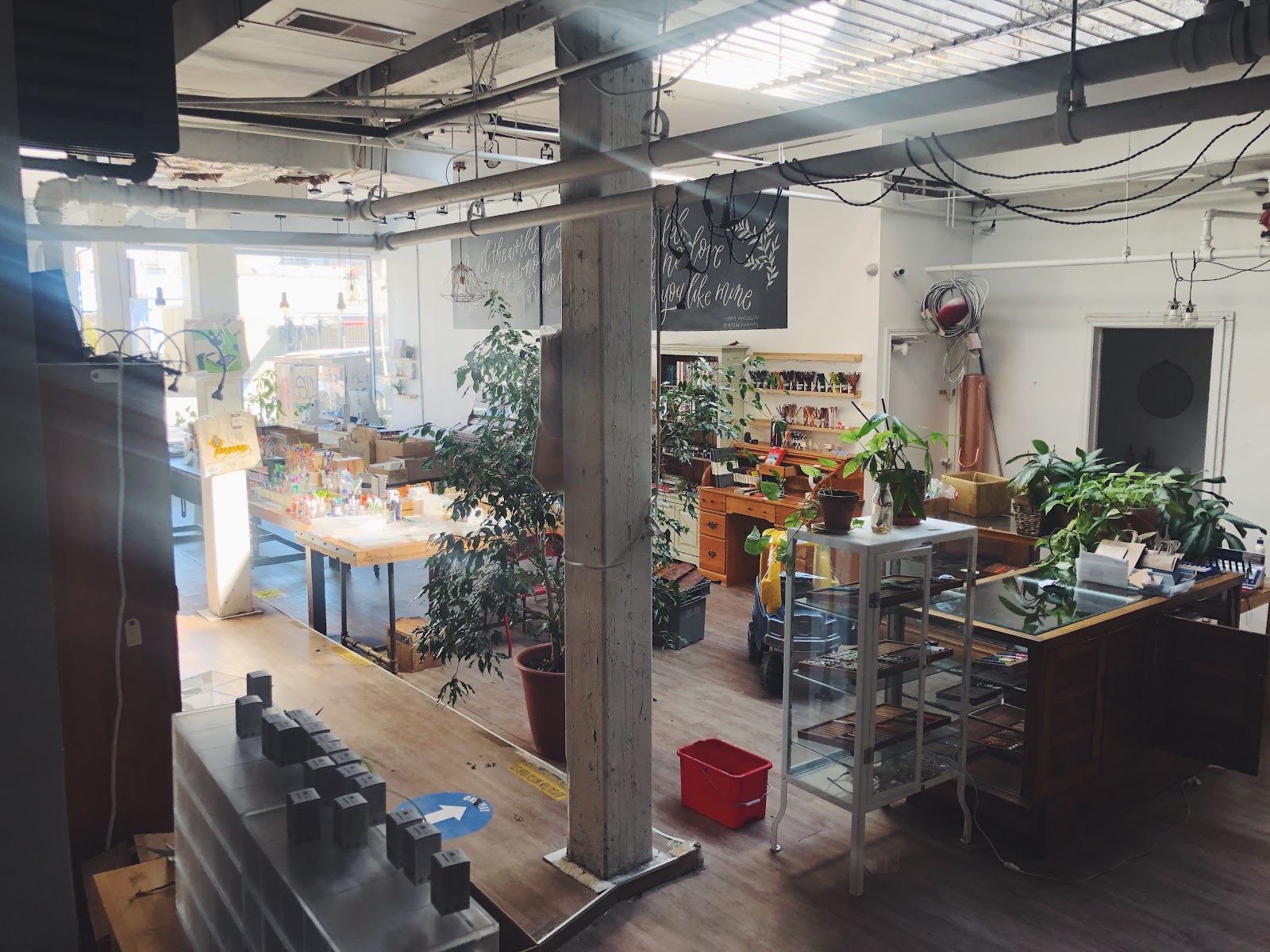 I love your social media presence, no strategy required! I think the success you’ve had speaks to authenticity and your connection with customers rather than a contrived marketing strategy.

And, like others have said, don’t take the spam comment to heart, it’s likely they just clicked that randomly so they could submit the request.

Please don’t take one “spammy” comment to heart! Truly, I look forward to Tuesdays for your newsletters! I agonize between opening it immediately to know what has come into the shop and have a chance of adding it to my cart before it sells out, or waiting to savour it slowly later in the day.

You’re doing a fantastic job with content. I love your tone and glimpses into small stationery-store life! I admit, I’m not on Instagram either, but I would follow you if I did that.

Liz is coming along nicely too – you’ve done a good job training her, Chicken!

Hi Liz
Just read your COVID post. I was reminded that our cats and dogs are not generally subject to our current anxieties and confinements. In my community here on Vashon Island, where we value the natural order of things, the cats are confined for the sake of birds and dogs are free to roam from porch to porch, mooching and pooping. We dog owners have agreed to all be poop monitors picking up what we encounter (even if it’s coyote scat) or see next to a small red poop flag another neighbor has placed for our convenience. I think the cats are cool with this, though I’m a dog person and only see cats when I visit my sister or a vaccinated neighbor.
I am left with the image of angry Chinese lady in the window. You are a reason to come to Toronto. Stay healthy.
Tom

Why on earth would someone refer to your newsletter as spammy content!? That boggles my mind. (Also how dare that guy with the dog do that! Where are people’s manners, honestly!?)

… and now I feel like an old lady shaking her head (and fist) grumpily at “people these days” and I’m hardly an old lady (despite 14 year old me thinking that being in your 30s was definitely old! Lol).

But I digress, I came here to say that I love your Instagram posts, I love your email newsletters, and I love your blog posts! It’s all very entertaining to read and has a nice cozy feel of following your family’s journey with the shop that is just so wholesome and lovely.

(and I’m now even more impressed after finding out that you do all the social media on your own, Liz. Give yourself a pat on the back, social media is complicated, I’m still trying to figure out IG stories lol).

Love your blog and always look forward to your newsletter in my inbox. It always makes my day!

I enjoy reading everything that’s stationery related in your newsletters as well as everything you choose to share on your blogs. It always makes me smile.

I think you and Chicken are doing a phenomenal job with social media! I always look forward to seeing your posts and hearing about what’s coming up next from you and the team :)

Totally enjoy the newsletters!
And the instagram posts.
Whenever you get to them, it’s great,
I learn a lot.

I love your blog and your newsletter, Liz. You write so beautifully, photos of the animals and the kids make my day.