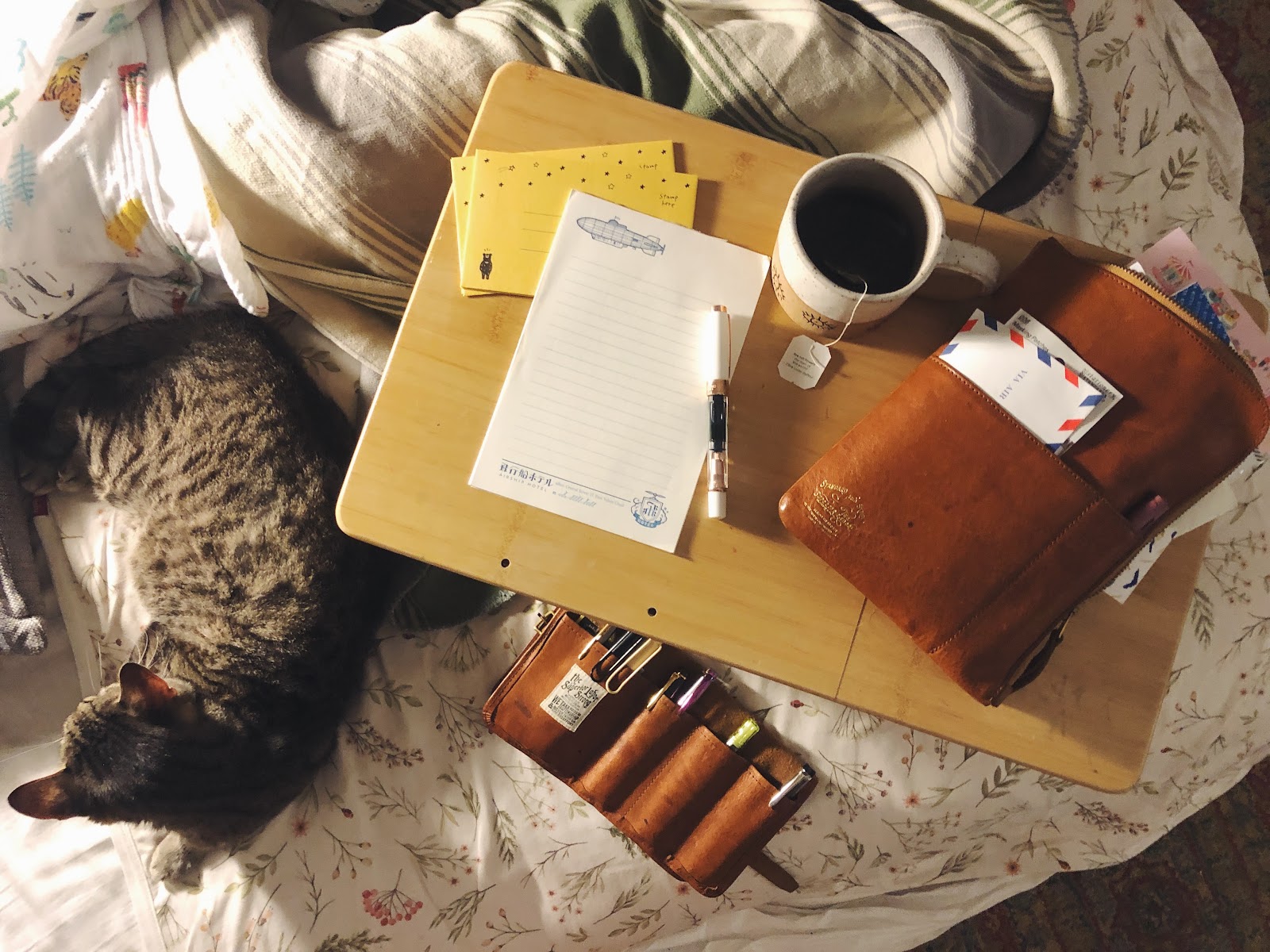 Our next Letter Writing Club is happening Monday, August 8, from 5 to 7, and I am somewhat aghast that unfortunately I will not be making it. A somewhat impromptu and spontaneous serendipity has meant that I’ve signed Caleb up for band camp, so we will be away.

I was a bit demoralized about not being able to participate in our July Letter Writing Club, and now I’ll be missing the August one, so I held my own lonely one, everyone asleep around me, my own witching hour. No egg tarts, but you can’t have it all.

In preparation for the July LWC, I had “gathered” my letters and supplies by jamming them all into an overflowing TSL portfolio. I had sorted through my inked up pens, cleaned a few out, filled up a few more. We’re still in the middle of renovations, and letters and pens have been piled into boxes and trapped in drawers in desks that are trapped behind boxes.

At the actual event, I was too busy and too distracted to write any letters, and so I brought all my things back home. But, having accomplished this long-procrastinated task of calling back all my lost sheep, everything now at hand, I somehow found myself tucked up late at night with my babies and my stationery. No better place to be. 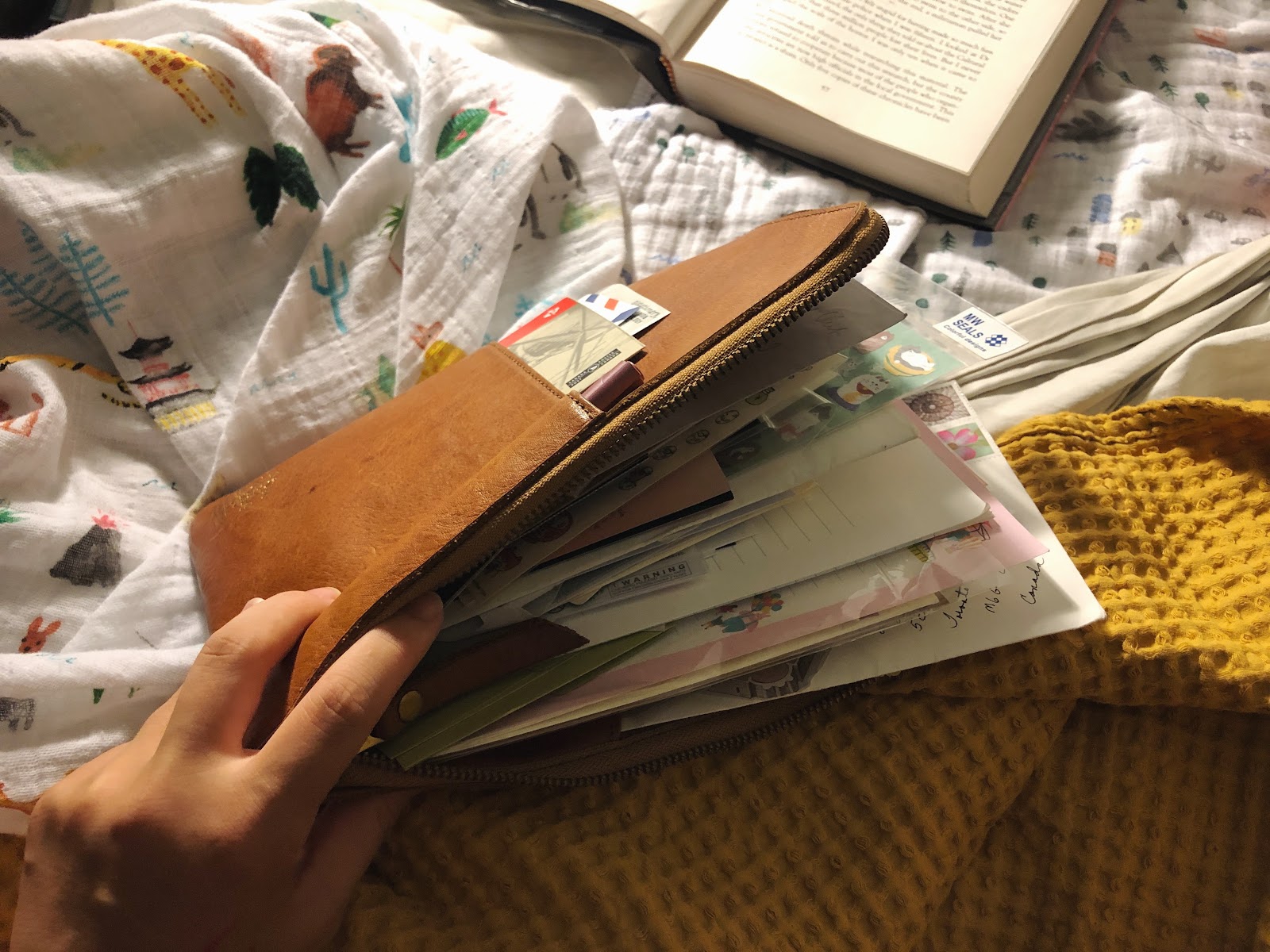 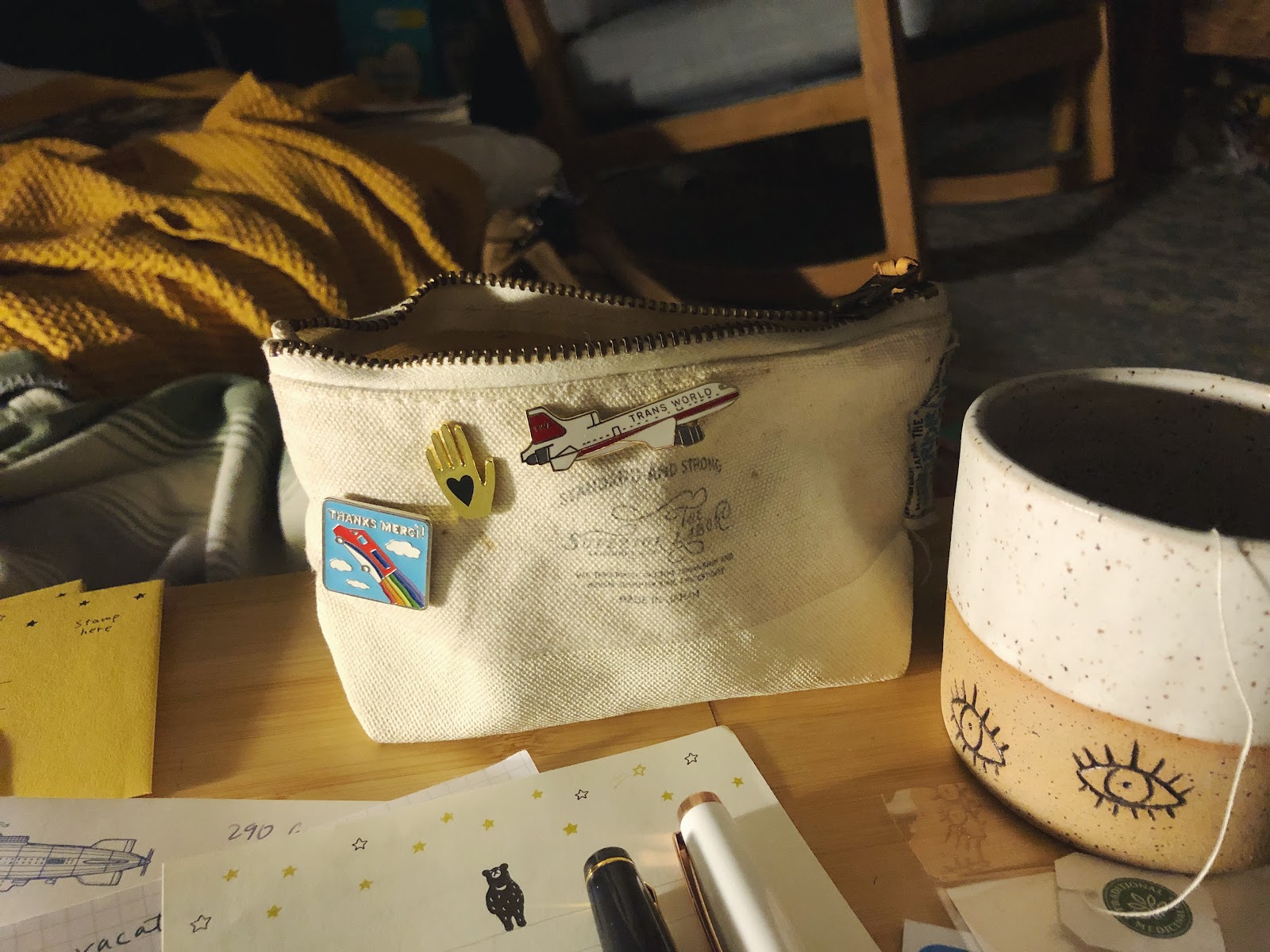 And here, my TSL pouch, which holds my wax seal supplies. I didn’t even bring this to Letter Writing Club with me (one must show some restraint), and so the letters for this solo writing had a little extra something on them. In the shop, we sell individual sticks, and every once in a while one in a box is broken, which we can’t sell, so they come home to me, multi-colour sticks that I melt together, their deformed knobs announcing their orphaned state just before they get transformed into a little round blob of ginkgo. 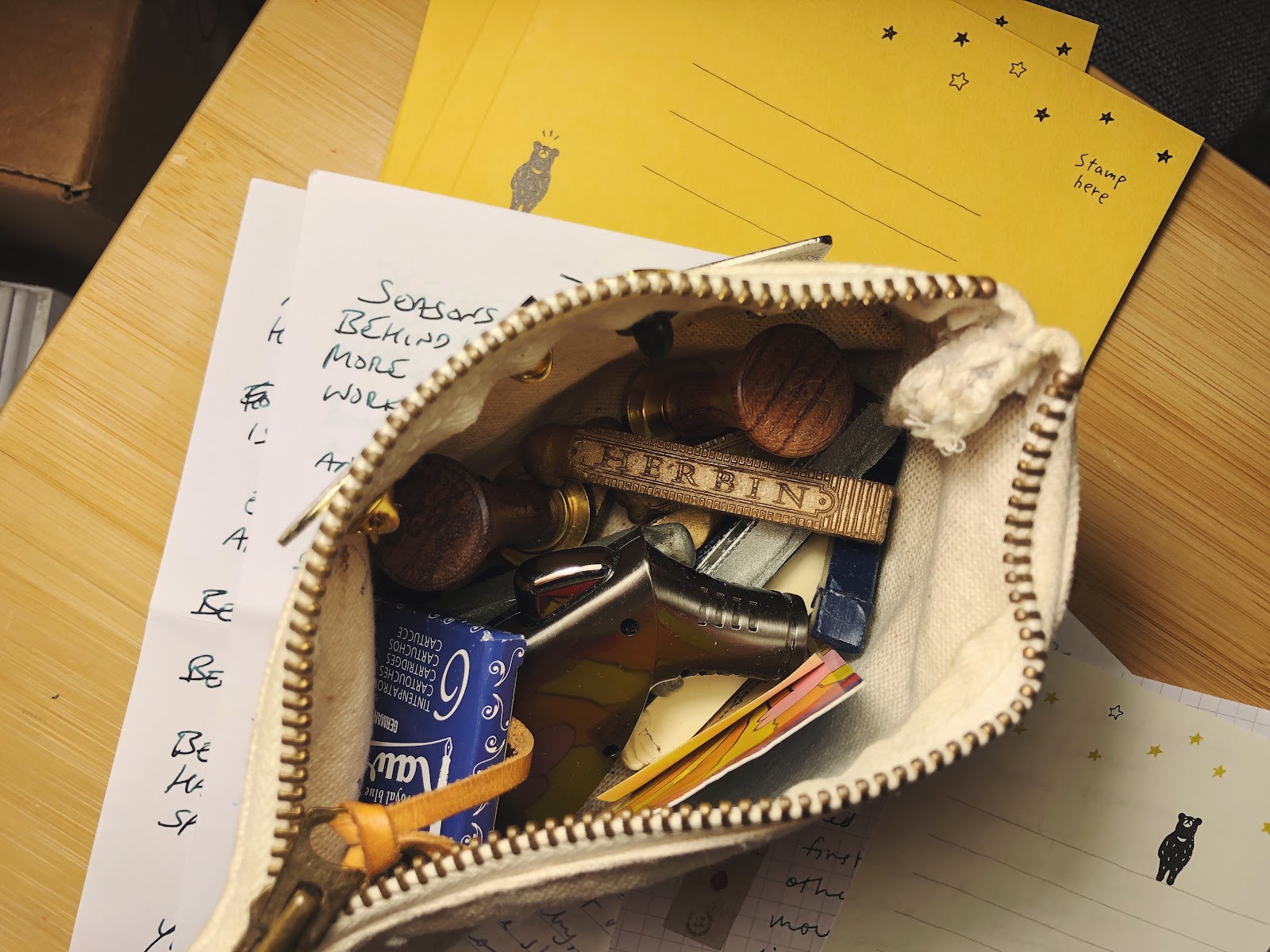 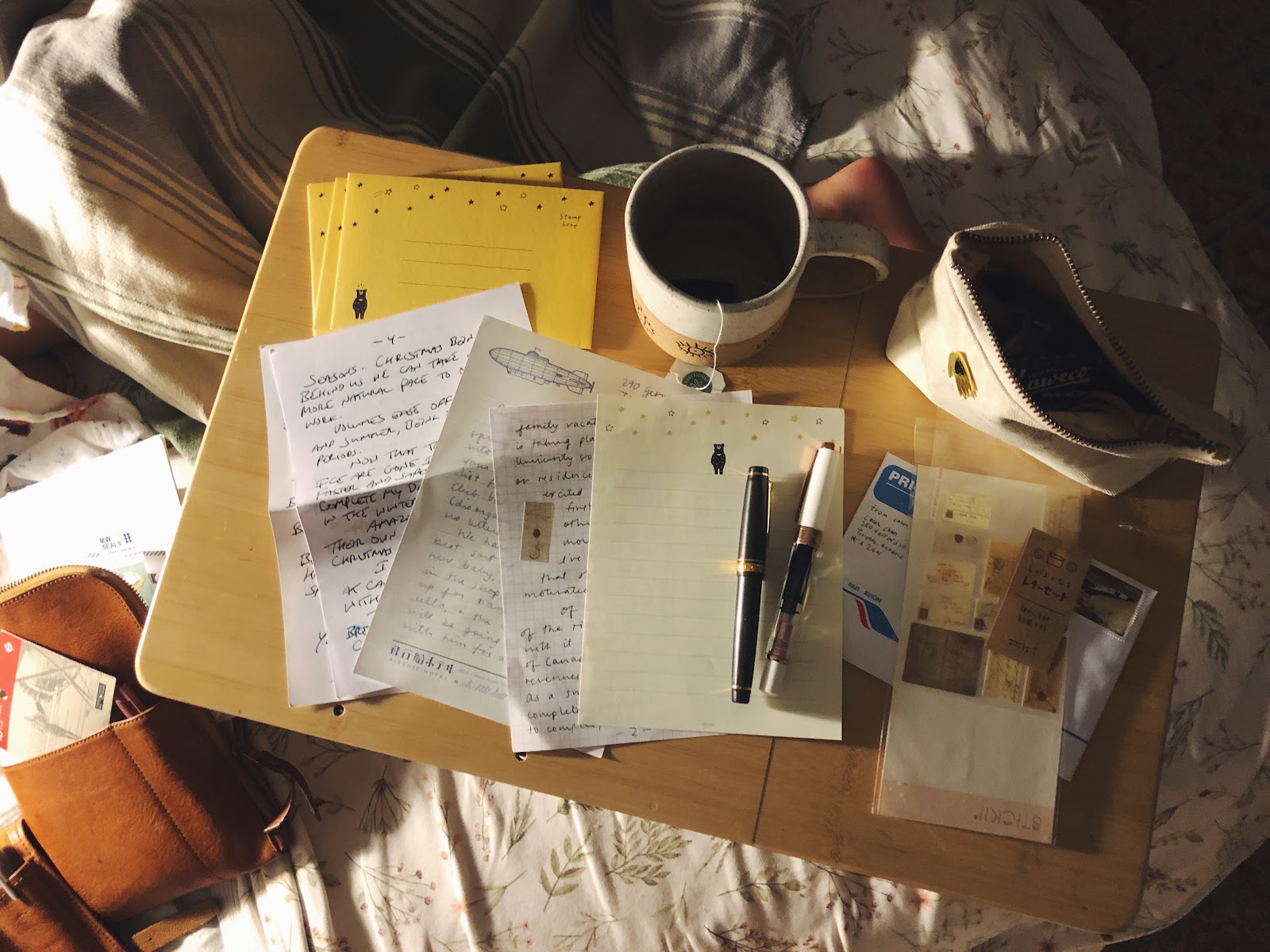 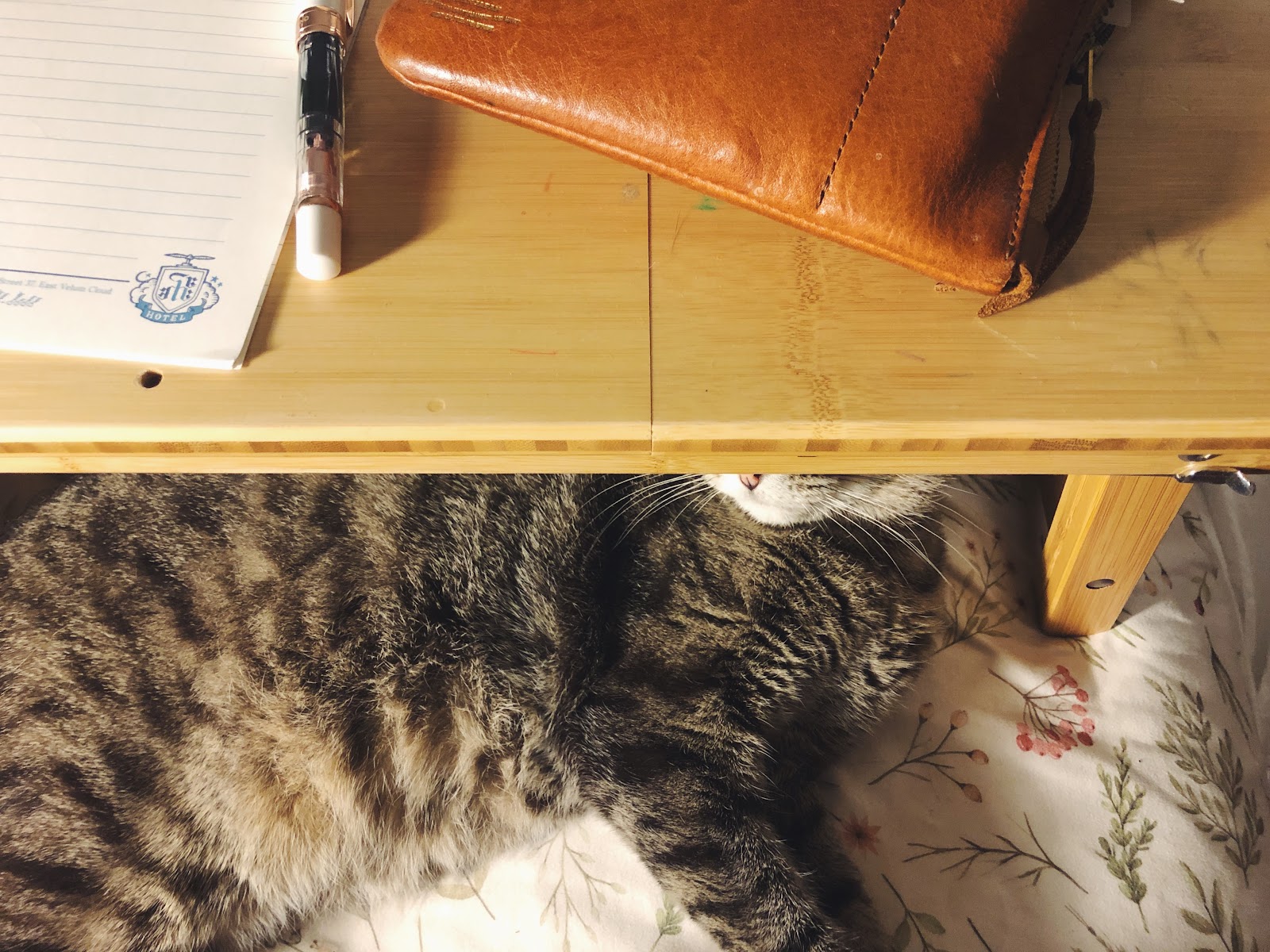 I’ve been dreaming (as usual) about reopening the Studio Shop, and maybe having more regular, more casual Letter Writing Clubs there, or maybe just reliving my 906 days, so few customers that the ones who came got to stay for a few hours, chatting, trying out pens. I dream about busting out the coffee machine, maybe having more meet-ups, Traveler’s Notebook meet-ups (that stamp!), or general pen and paper ones, but the place is a mess. People have been peeking in the windows and backing away slowly before sprinting. Maybe one day. It was in terrible shape and then sort of in decent shape and we flung the doors open for a little while and then we started renovations and had the baby and things just sort of spread and flattened. The other day someone dropped and broke the nib on the Lamy 2000 tester at the Main Shop, so Jon is not in a mood to entertain wild notions that will likely involve him moving furniture around, even as I agitate in the background.

In any case, it was just a few minutes between the late night snacks for everyone, but I will take them. I’m trying not to blink because when I open my eyes next the kids will be 45 and I’m going to be decrepit. And that’s not even to think about Tuna’s countdown! Let’s not think too much. I will just take these slow moments and nibble on them, Charlie’s chocolate bar to last as long as I can make it. 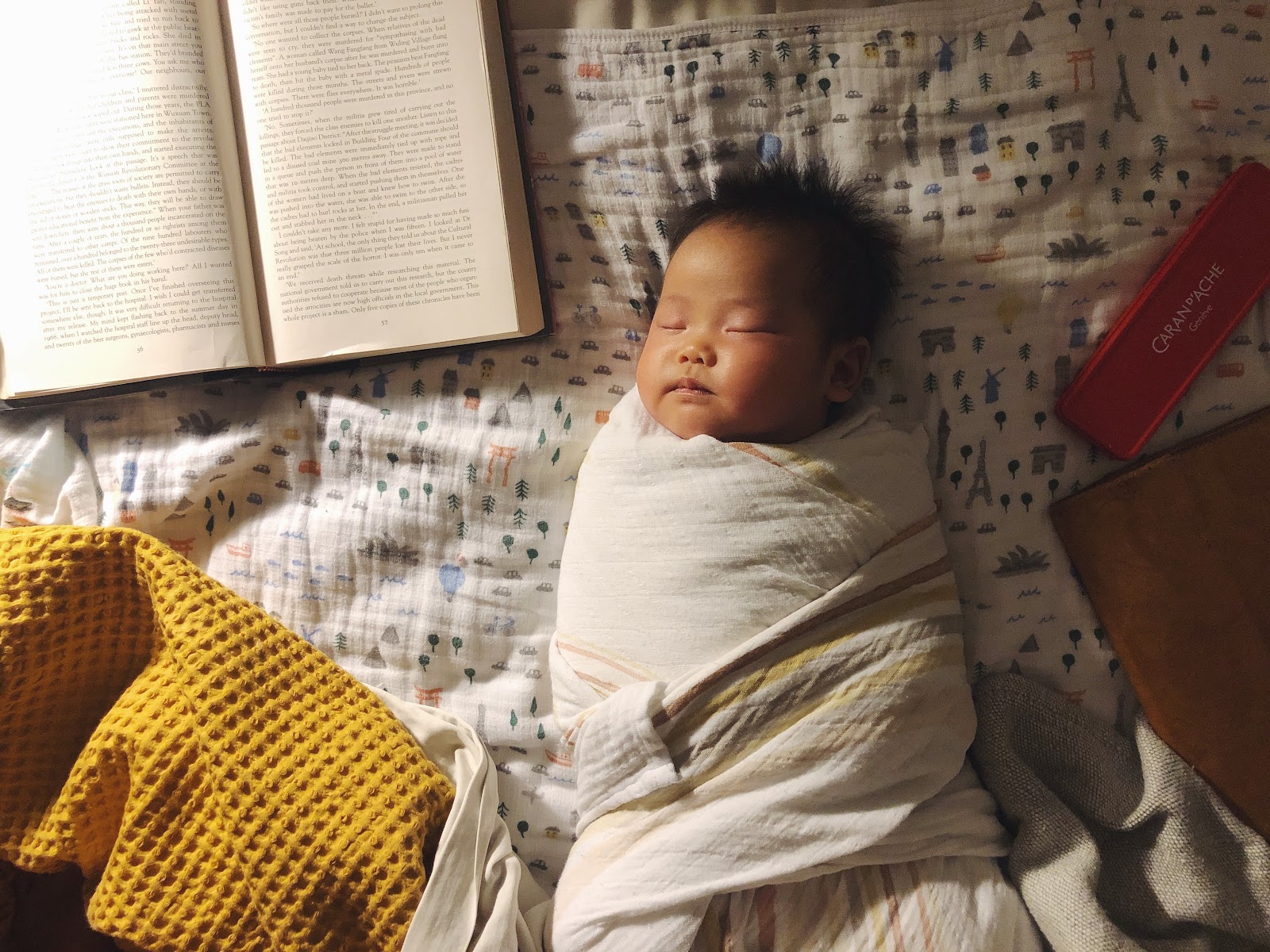 I love the idea of the Letter Writing Club! Unfortunately, I don’t live in Canada, but came across one of your pen pal exchange posts from last year. Do you plan on doing another one of those sometime? I hope so! Love your blog so much!