Wonder Pens Reads in September: The Enlightenment of the Greengage Tree by Shokoofeh Azar

Once they had a book in hand, who knew when they would put it down again? They skimmed through them, allowing passages to catch them like fishing nets and carry them down into the depths of their sea. 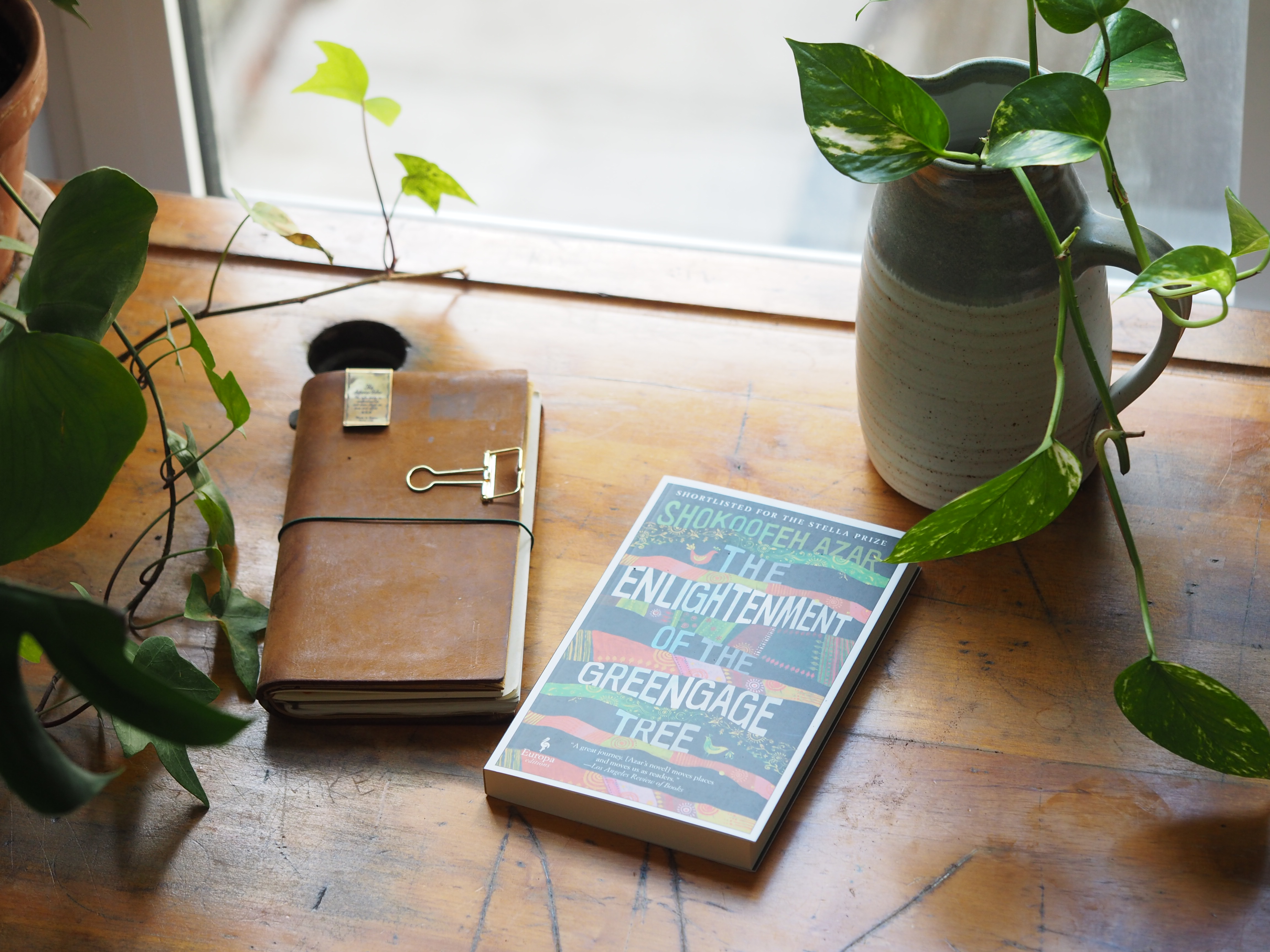 One of the many balls I’ve dropped over the last six months is our monthly book pick. We’ve actually got a few more in the queue, languishing in the land of forgotten projects, all giving me sullen and resentful looks from their dusty bookshelves.

This “month” our pick is The Enlightenment of the Greengage Tree, by Shokoofeh Azar, a book following a family in the decade after the 1979 Islamic Revolution in Iran, translated from the original Persian. Shokoofeh Azar fled to Australia as a political refugee.

The story is told by a dead daughter, a ghost who follows as the family continues along in the midst of a brutal political regime and post-revolutionary chaos, losing and suffering more but also finding the threads of life and meaning in their family and their journey. It’s a bit grim, but is also curious and snarky and generous and the slow unraveling of various kinds of love stories. Surviving the most horrific losses and the projects and people we hold onto to continue on. In a time when I am now more and more realizing how much of the world I have no idea about, it’s books like these that offer a glimpse into the human side of history.

To my delight, there is also an appreciation for books and paper and handwritten letters. Places full of “stashes of notebooks and paper and termite-infested handwritten books and old photographs,” the horror of a book burning, a family that could “still get excited by and devour a newly discovered book,” a gargantuan labour of love in cataloguing and classifying their library of thousands of books.

There is a description that only a reader could write:

“He spent hours locked in the library without reading a single page; he flipped through books, smelt them. He examined notes written in the margins and tried to guess or remember which handwriting was his own, which was Khosrow’s and which belonged to his father and grandfather. …Every book he touched was more than a book. It was a memory. His entire destiny. It was longing.”

This is one to read slowly and savour. It’s a translation, which always opens up questions about what is between the original and the English, but the story and the language are wry and funny and darkly casual. There is magical realism and ancient myths and ghosts in families, and it also talks about intellectual freedom and storytelling and what we need to do to keep alive.

As always, all of our Wonder Pens Reads books come with a lovely notecard for you to use as a bookmark, or to take notes with.

I’m still reading lots these days, some days more than others, but mostly while I’m eating, or hiding from the kids, in Caleb’s bed, where he has the best reading lamp of everyone, or during one of the few multi-hour long quiet lulls I have at the studio shop between customers. It feels like I’m entering into dangerous territory, wanting more time for reading. I’m trying hard not to blink, or else the kids are going to be babies heading off to college or out into the real world when I open again.

The other day Caleb asked me a convoluted question about breadcrumbs and mysteries and why there is a mystery around breadcrumbs. Aha! I thought to myself. My child’s latent literary genius, which I had been eagerly awaiting, now coming to surface. Early, even—I mean, at age 6? I settled myself into my car seat, angled my rear view mirror and launched into Hansel and Gretel and their trail of breadcrumbs, solving mysteries and following the clues, and also something to do with technology and tracking and how it’s a life lesson about the internet never ever forgetting what you do, my eyebrows raised, looking meaningfully at him in the backseat. No mama, he interrupted, I mean about the pigeons at the park. The mystery of why there are no breadcrumbs at the park for pigeons. Ah, I thought to myself, now a bit frostily. Well, Caleb, young child. It is now illegal to feed the pigeons in the city of Toronto, in which you live, and in fact, the real mystery is why people are feeding these flying rats at all in the first place. However, how wonderful that you are so civically engaged. This is what we need more of in this city!

No mama, he continued. He passed his book up front, featuring a crew of anthropomorphized pigeons attempting to solve “The Mystery of the Missing Breadcrumbs.” 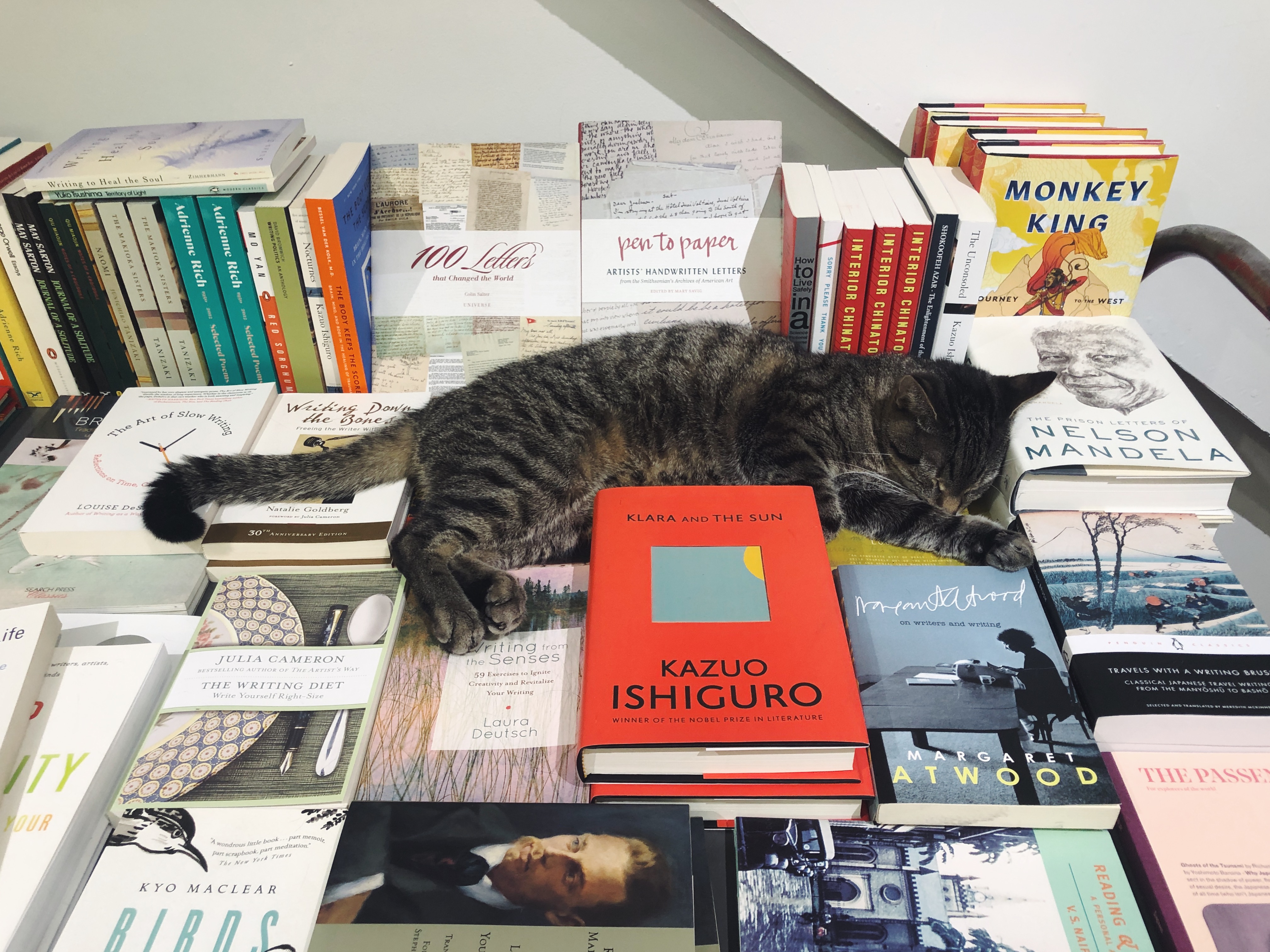 The book is now on my reading list. And thank for for making me snort tea with the Caleb story!

Did you adopt another kitty? Is this one of the grey cats that were hanging around? I saw the picture in your newsletter of this cat & Chicken sleeping on your desk.)

Oh, so that’s why my sister and I got dirty looks from people when we were feeding the pigeons (and sparrows) when we were visiting Toronto last month. Oops!

Liz, thanks for sharing the delightful story about Caleb and the breadcrumbs!