We went to the pumpkin patch! While I continue to languish under oppressiveness of all the things that you’re supposed to do as a parent, all the experiences and opportunities you’re supposed to provide your children with, in a state of exhaustion I thought we’d forgo this year’s trip and focus instead on rallying all of my energies in preparation for going out to get a Christmas tree. We’d run out of weekends, days, before Halloween, and I had assumed the children would forget. Ha ha ha! The turkey hacks. I had suggested going to the supermarket and picking out extra special pumpkins, but the suggestion was not taken well.

We actually missed a day of school in order to do this, our weekend days booked up, and also because if we’re going to do this, I’m not sure I have the mental fortitude to do it with weekend traffic and crowds. 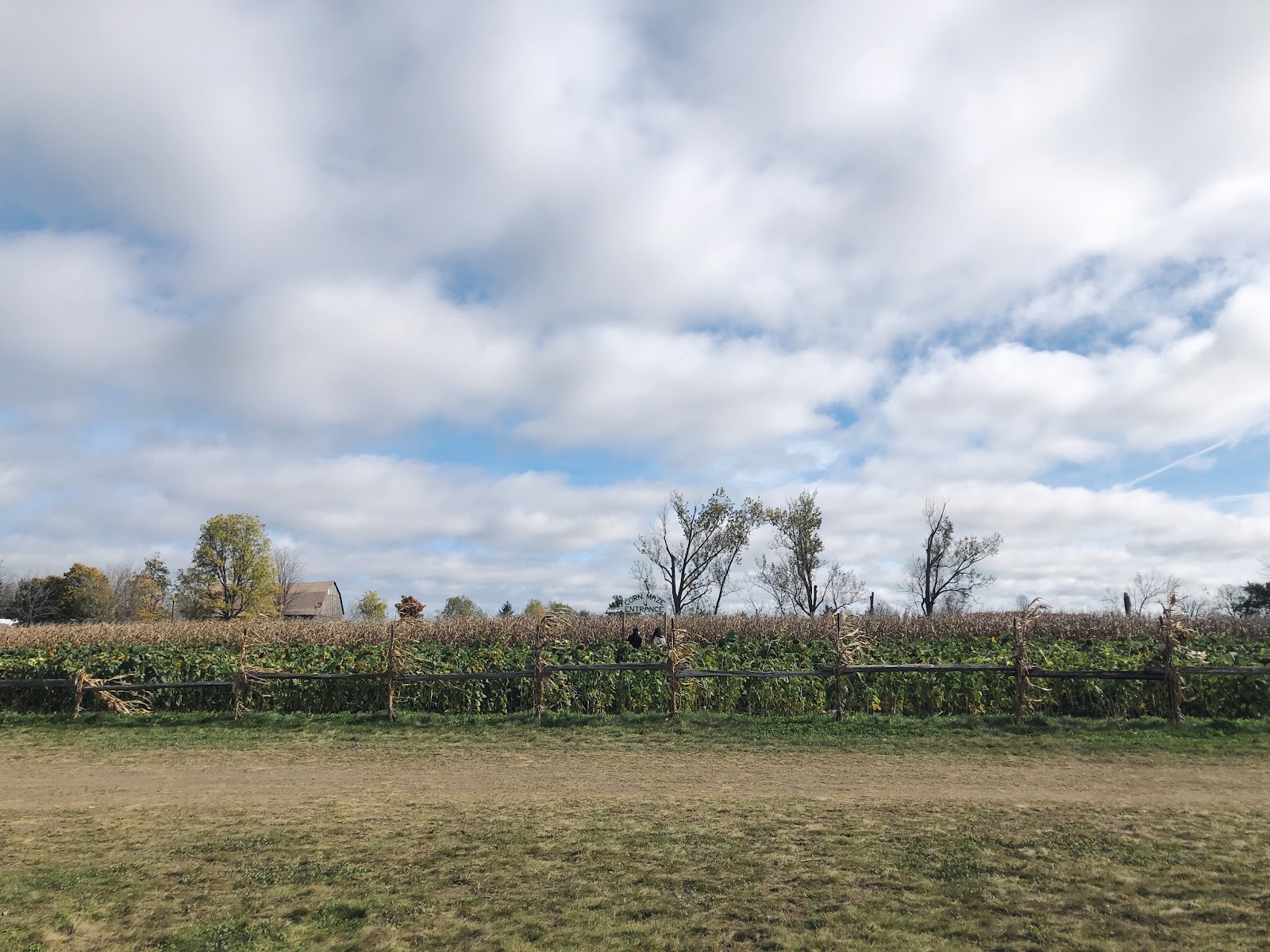 I didn’t get a photo of the kids in the corn maze because it was really cold and I didn’t have any mittens, but the kids had a lot of fun. 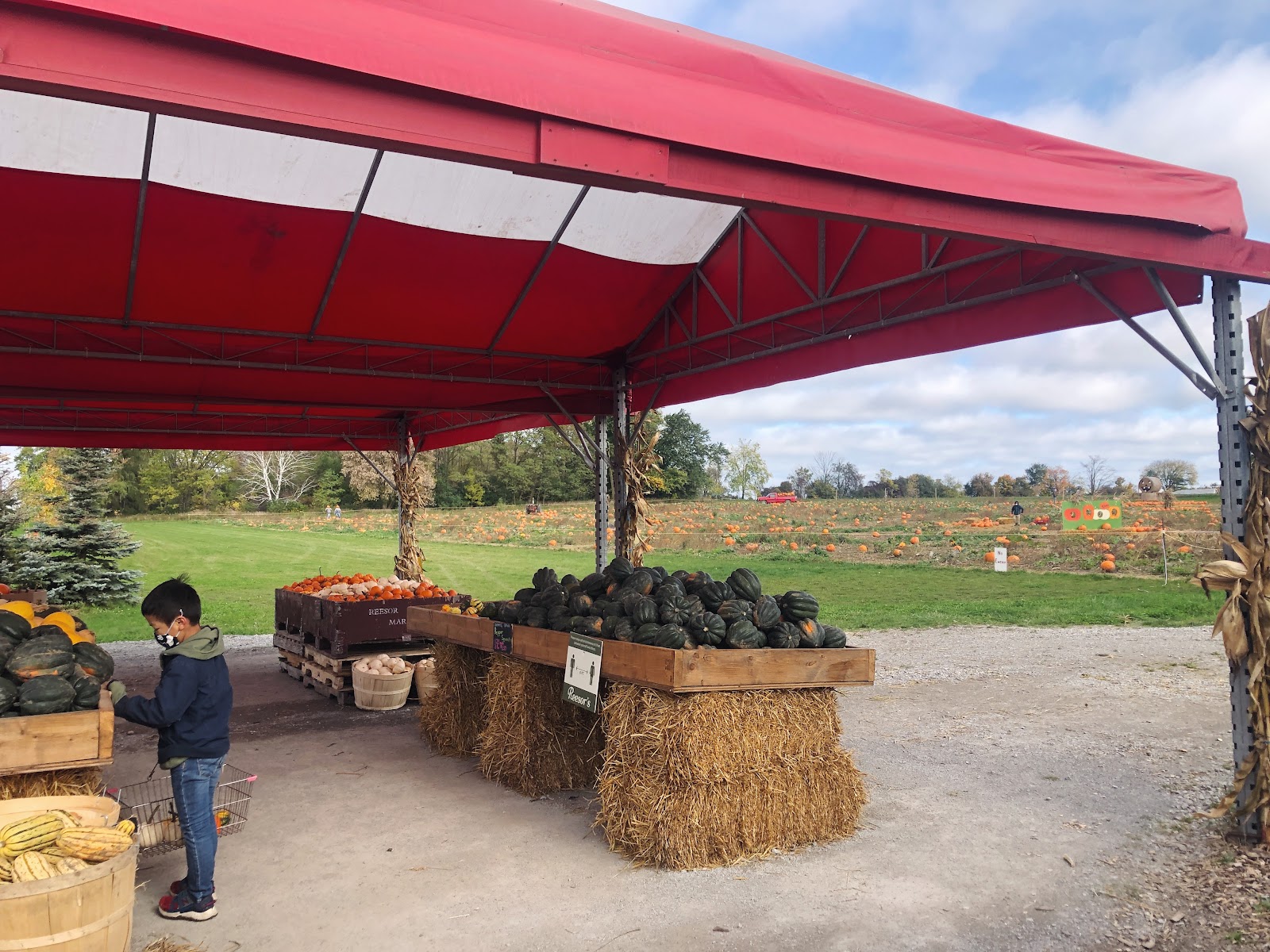 I did not get any photos in the pumpkin patch either. It’s less of a loss (if any at all?) since this close to Halloween the patch is not too pretty, with quite a few unfortunate no-longer-spherical pumpkins, now true squashes, rejuvenating the ground for another season. But here below is Caleb, standing obediently by the pumpkins for people who don’t want to go harvest their own. 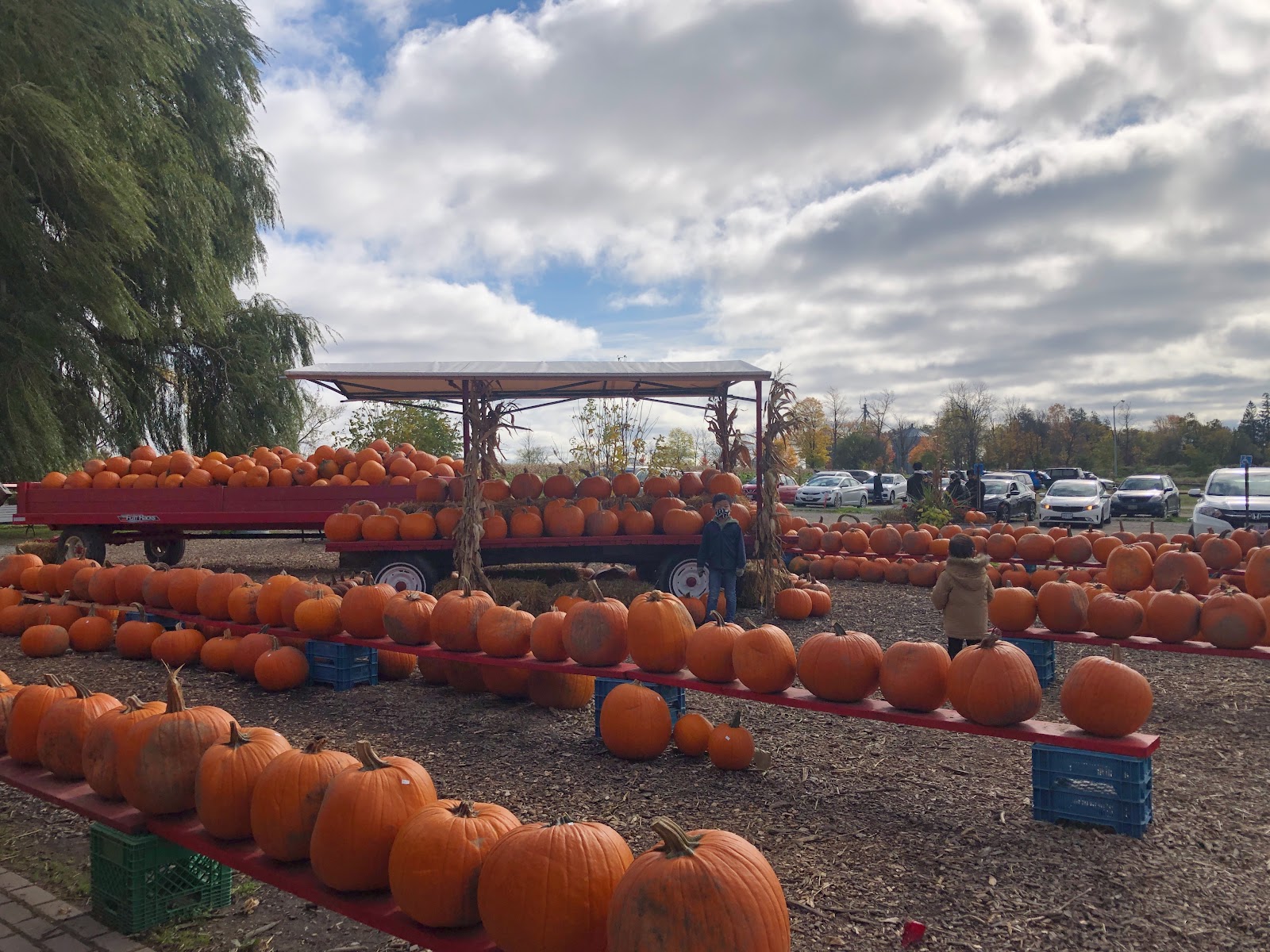 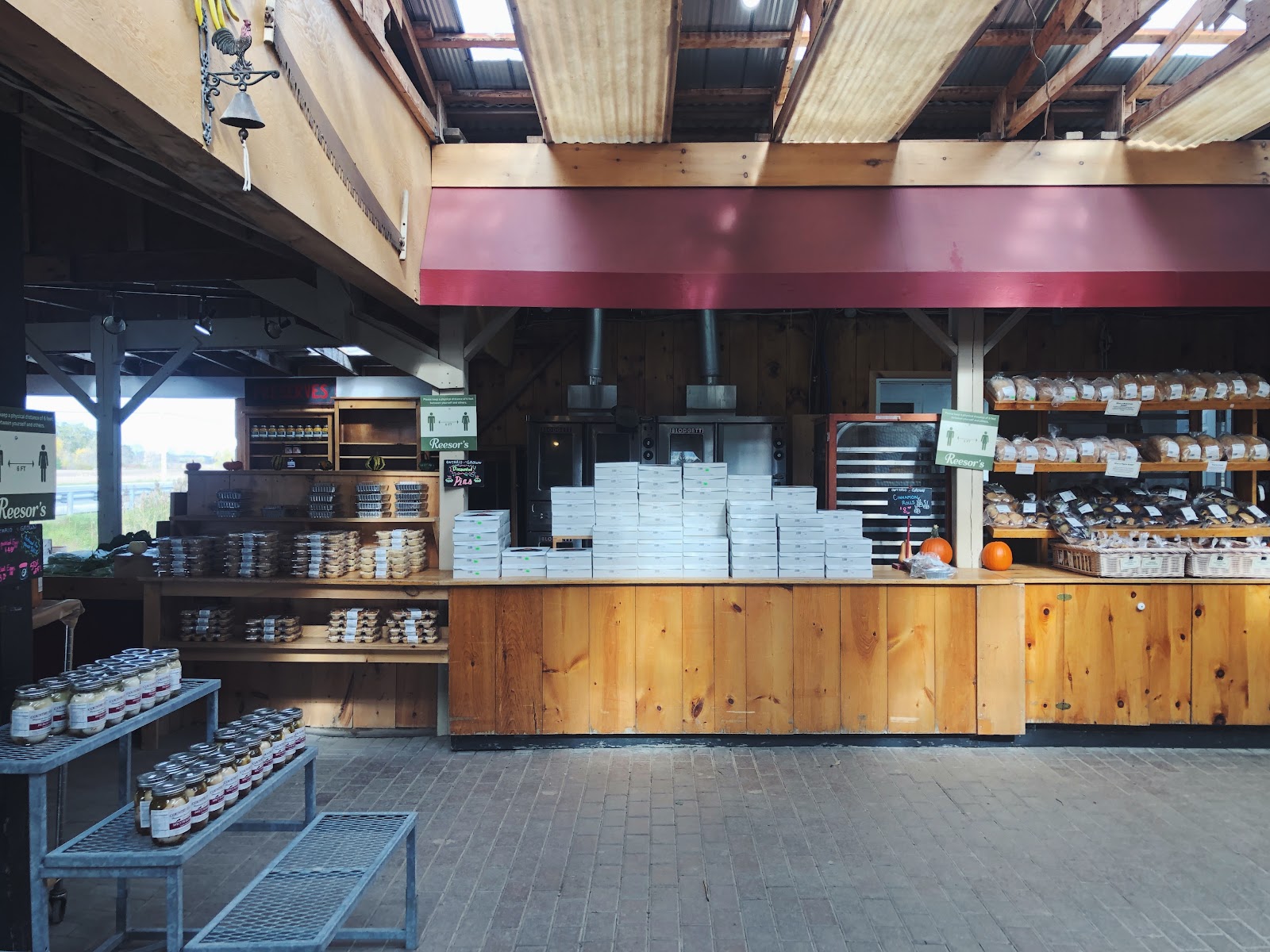 And a final visit to the farmer’s market, where they have baked goods and produce. In the basket: decorative squash for display in the shop, garlic (out of stock at Loblaws??) and butter tarts. This basically sums us up, a Chinese family from Toronto, trying to go out and have a true Canadian experience. 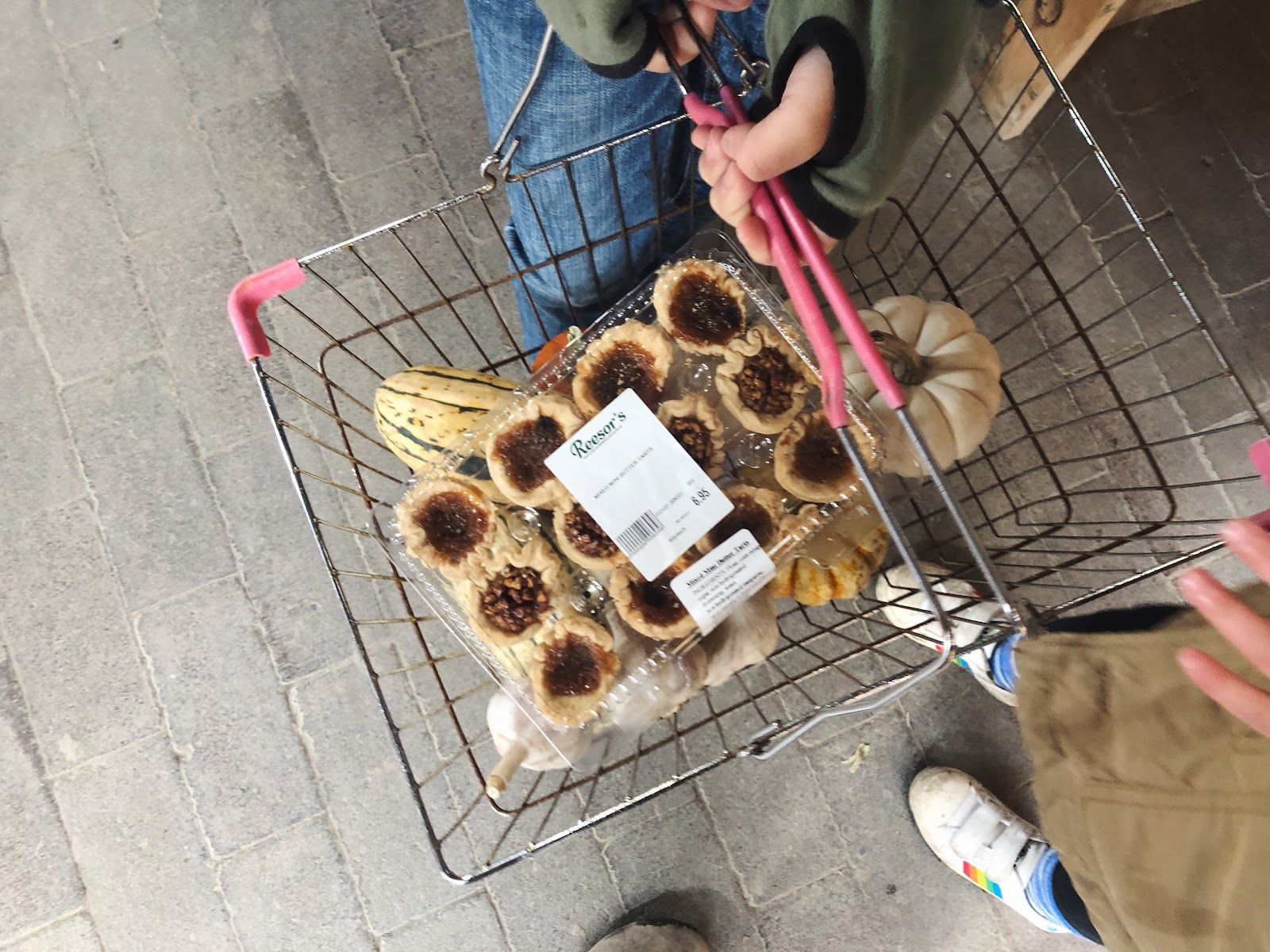 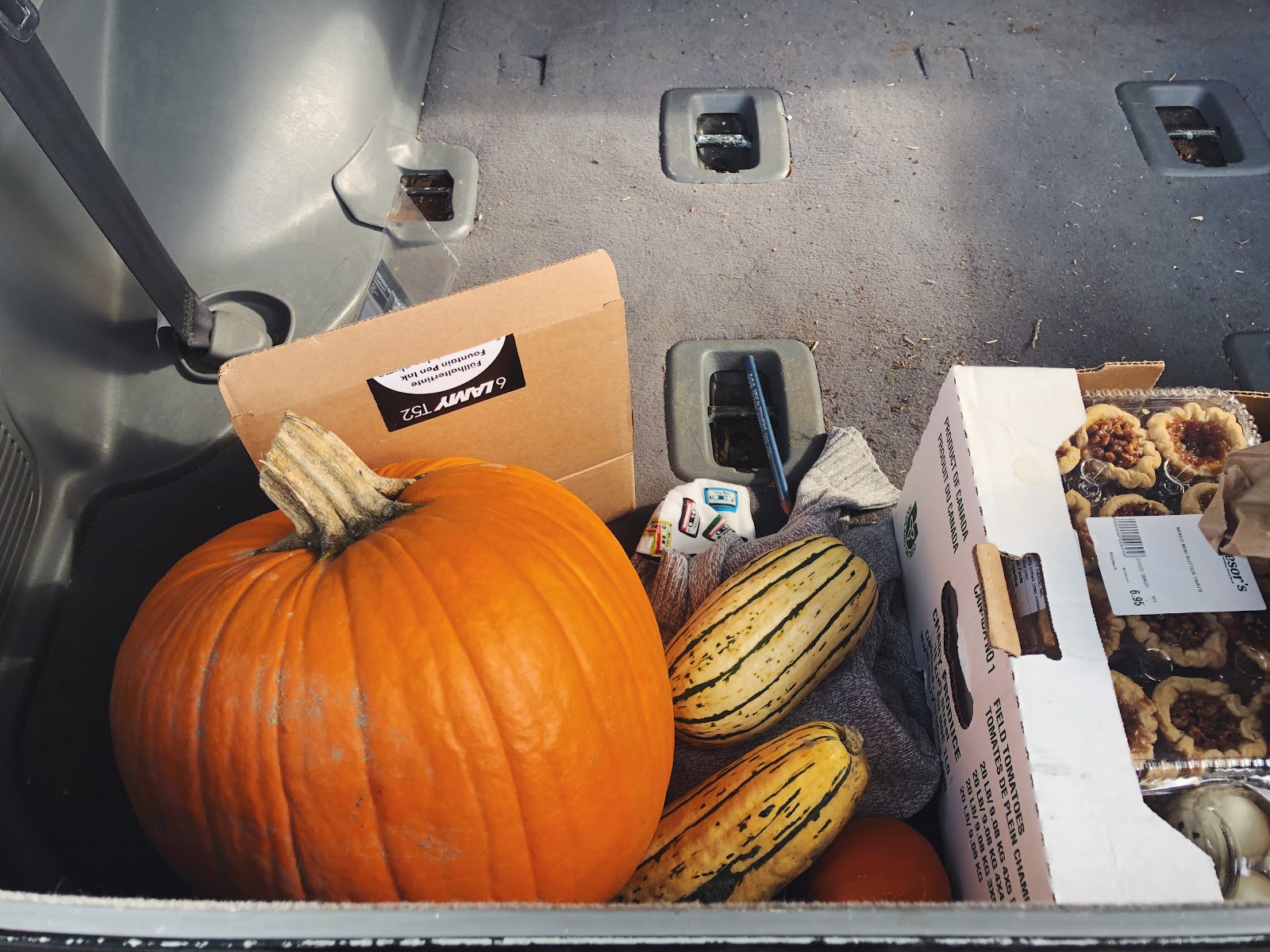 I am glad we went, glad the kids forced us into going on these sorts of adventures. We came back to our cats waiting for us at the door, one damp and ready for love, the other damp and ready to hide somewhere far away from us but still indoors in order to better pretend we don’t exist.

Later that night I was lying in bed with the kids, reading Caleb his bedtime story (the Rise of the Guardians series, which I highly recommend) when I felt and saw out of the corner of my eye a bug crawling on my arm. I am not one to take such things in stride. I recoiled and catapulted from the bed, shrieking loudly for Jon. “What!” He cried. “A bug!” I cried. Jon was unimpressed, even more so when, upon beginning the hunt for it, Caleb cried “It’s here!” And it was a tiny brown moth fluttering around on the sheets. Naomi, at least, looked at me approvingly afterwards: “You’re good at calling for papa, right?”

It’s all to say life comes at you fast. I recently got a 4-star google review for the Studio Shop, saying everything was great, staff were helpful, etc., but they took off a star for the sporadic hours since the pandemic. But—the review added—you could order online or go to the Main Shop. I had to laugh and cry at the same time. Yes, the Studio Shop hours have been extremely sporadic. Sporadic might even be generous. Back in the late summer, I had had big plans (dreams, it turned out) to have the studio shop open just a couple of days a week after the kids got back into school. Such a low bar, surely even you, Liz, could meet that, right? We hadn’t actually announced any firm open hours because we were waiting to make sure I would actually be consistently open at certain times, and a 4-star review with “open by chance” for sporadic hours would definitely devolve if I was closed during actually announced open hours. I have yet to announce open hours here.

What happened?? I have no idea. It’s now the end of October and I still haven’t gotten my game together, and we’re still operating by chance or appointment only. Today is Monday, and I’m eating my lunch cold with Naomi, because she’s home from school with a runny nose. We just got back from her Covid test at UHN. Before we left for her test in the morning I had banished her to the living room with instructions to do some homework, but the only things I managed to get done were throw in a load of laundry (now sitting cold and wet and pathetic in the machine waiting for me), post on Instagram about the new Stalogy notebooks, and order an umbrella for Caleb, after receiving a message from his teacher about how everyone needs to be properly equipped to be standing outside in the rain. Appointments, unexpected sick days, appliance deliveries, my inability to spend more than two months away from my dentist due to a helpful habit of aggressive teeth grinding and chunks of my teeth literally falling off in my mouth. Life.

The 4-star review isn’t actually a real catastrophe, in this world of actual real catastrophes. As far as small businesses go, we know and appreciate what it means to still be alive and flowing after a year and a half of this pandemic.

We are, however, operating at maximum capacity, as a shop and as a family. I am taking screenshots through the camera of people urinating on my building, we are driving an hour outside of the city to spend half an hour in a corn maze and pick up a pumpkin for the squirrels to munch on, I am walking past dead, unwatered plants on the stairs, waiting for someone to do something about them, like throw them out, I can’t find my fall jacket and I’ve been complaining so much about it Jon has finally okayed repurchasing the exact same jacket but I’m against it in principle because it should be somewhere in the basement but who wants to spend time hunting around in there, I’m spending my day worrying about Caleb’s weekly spelling test which for some reason occurs on Mondays, because when he doesn’t know how to spell a word, he doesn’t stop and pause and think about how it should be spelled but he just adds in more and more letters for fun, like extra sauce, until it looks about long enough. I ordered oxtail in my online groceries and I checked the top pack for the expiry date, which was the 25th, and I discovered on the 24th that the pack underneath expired several days before. Who does that? The same meat with two different expiry dates? I can’t even give the grocery picker a hard time, they are literally going around the store, picking up my groceries for me. Oxtail is not an inexpensive meat when you order it from Loblaws, and I think it comes from frozen, and it smelled mostly okay, so I just cooked it anyways and we’re all still alive.

I am supposed to be taking photos of new products, and they’re stacked up on my desk, but in the odd chance that the light is right, and the camera’s memory card is in the camera, and the kids aren’t doing something dangerous, one of the cats is resting atop the notebooks, and I am no scoundrel. These are shop cats, this is what they’re meant to do, lounge on stationery. The shop cloths have been languishing in my laundry queue, Christmas cards are in the shop and not yet online, people are messaging me on Instagram and getting stuck, unseen for weeks, in the requests and most of the time it’s just a cat face emoji, but every once in a while it’s someone, with all the urgency of a person about to lose their stationery, saying they’ve typed in the wrong address for their online order.

Everyone is doing their best. Staff are hustling orders out the door, counting and shuffling between boxes, greeting customers in the shop (the one that’s actually open). Naomi is “cleaning” the living room, after being threatened with doing some math homework. Customers continue to warm our hearts with their encouragement and patience as we catch up on Mondays or as orders slowly snake their way through Canada Post. Alas, my own best is sometimes only 4 stars, and so I am especially grateful for the team at the shop, who are really keeping the boat floating, who are solving problems before they become problems, who keep the phones answered and the email inbox moving.

As we march steadily forward, fall jackets or not, into the cold weather, we know that we really have so much to be grateful for. We are still here, we are still humming, and we’ve seen so many small businesses close their doors over this past year, some preemptively, early on, with hopes to reopen after the pandemic was over, others after giving it a slog for as long as they could. We would not be here without your support, keeping the shelves full, and the shop cats fed.

Liz, I love your blogs.
You perfectly capture the business of managing family life with children. Always busy, tons to do, ever ending chores, nothing ever finished- little sense of accomplishment before it all starts over the next day. The wiped clean table has new crumbs on it seconds later, everyone’s last minute crisis becomes yours to solve.
The camping trips and the trip to see pumpkins in the field are hard work, and that is what the kids will remember in 20 years.
The work of the parent running the household is endless and rarely visible. Thanks for reminding us!
Be kind to yourself.

Liz! Parenting, running a small business and a home-life, wrangling shop cats - thanks for sharing bits of life. I really hope that you’re not grinding your teeth to nubs. I also hope that you find moments where you can pause, take some deep breaths and find joy in the moments. My kids are now in their teens so my advice to you is that there are no “supposed to” activities and experiences. Your role is to love well and to give yourself lots of grace in the midst of the messes.