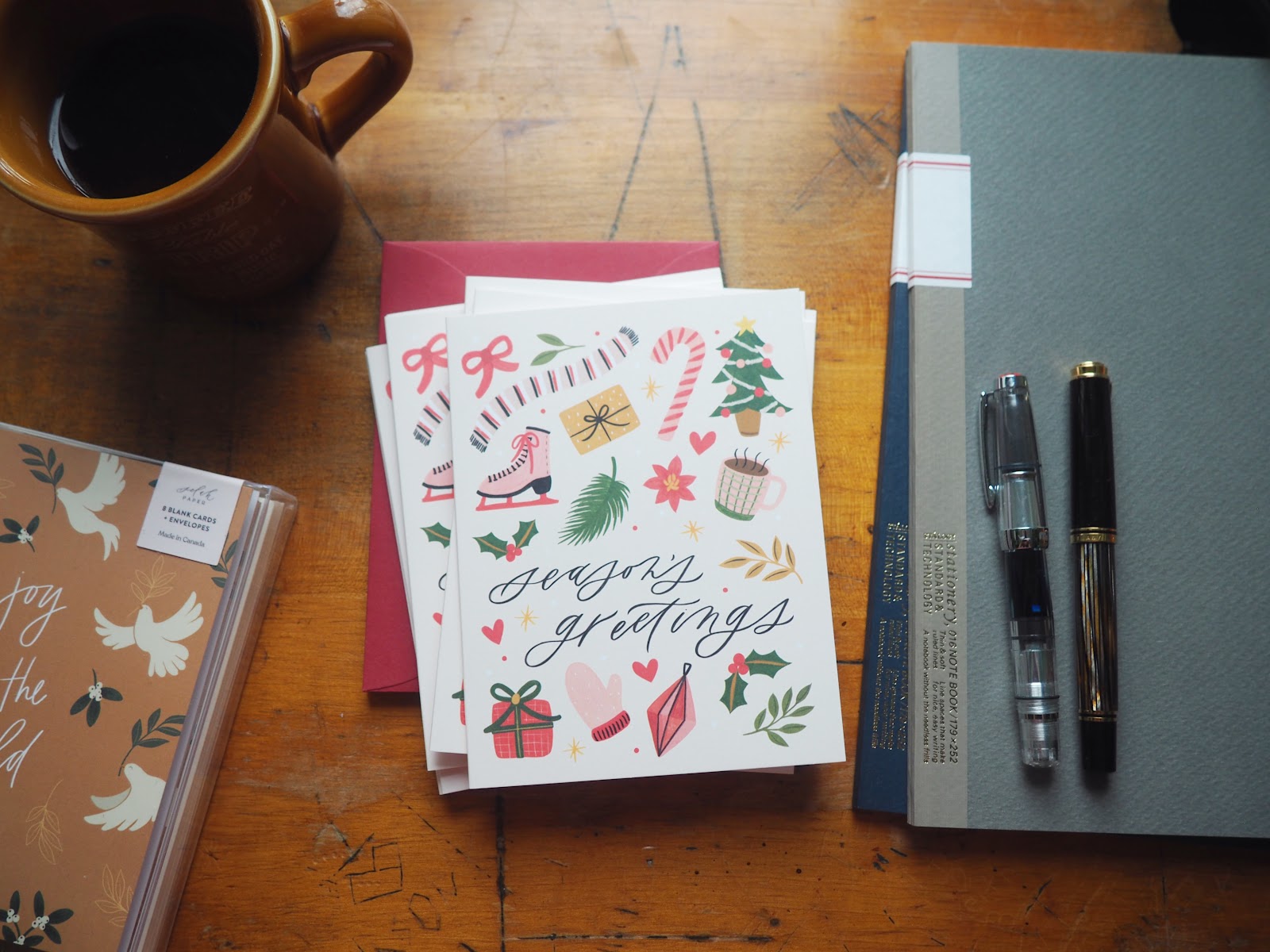 Of particular note this year, we have some new Christmas cards from Selah Paper, which is a local stationery company run by Sarah Kim, who you might remember doing some of our chalkboards in years past. It’s such a thrill to touch base with her again, and see how her business has grown. 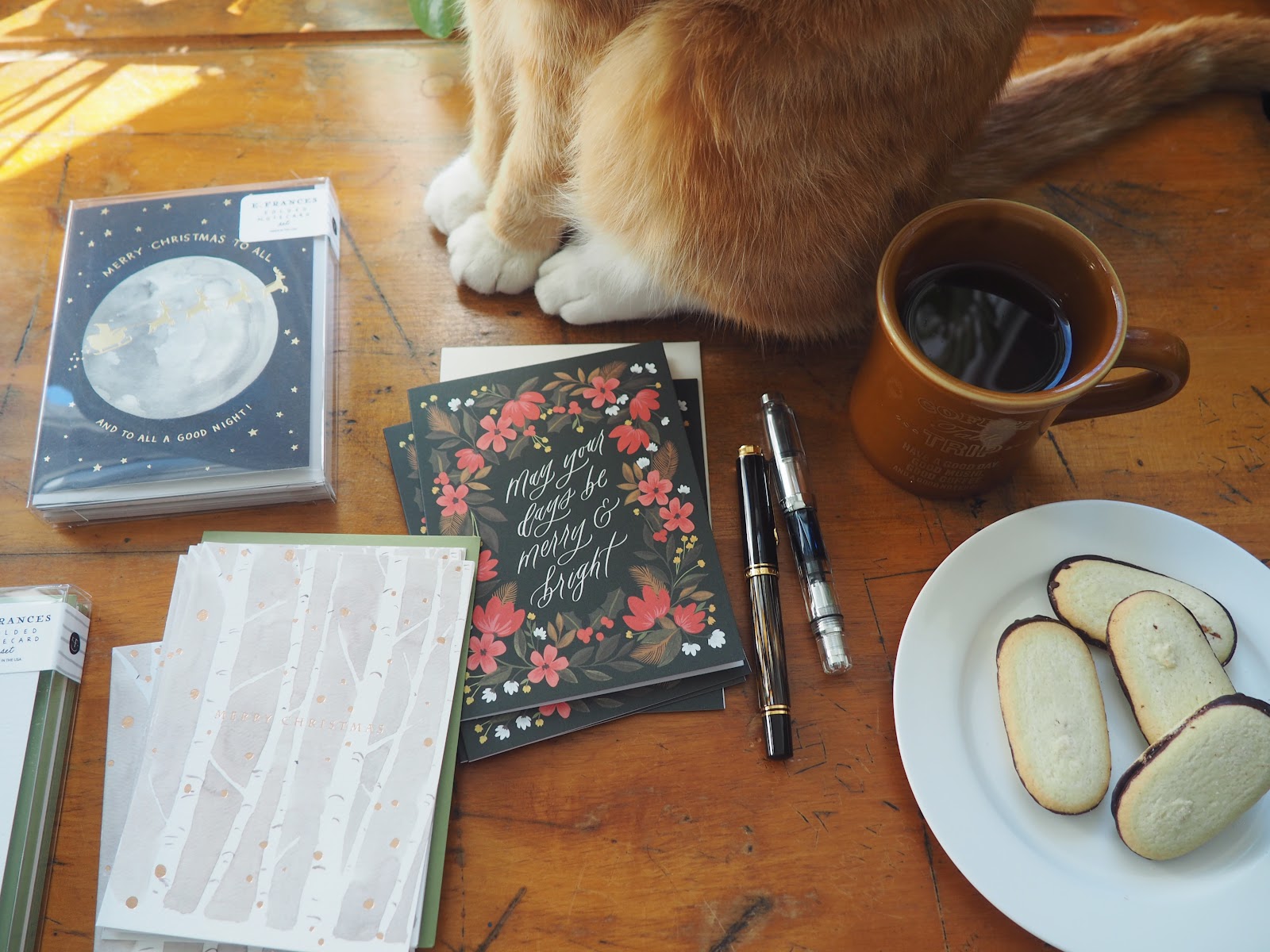 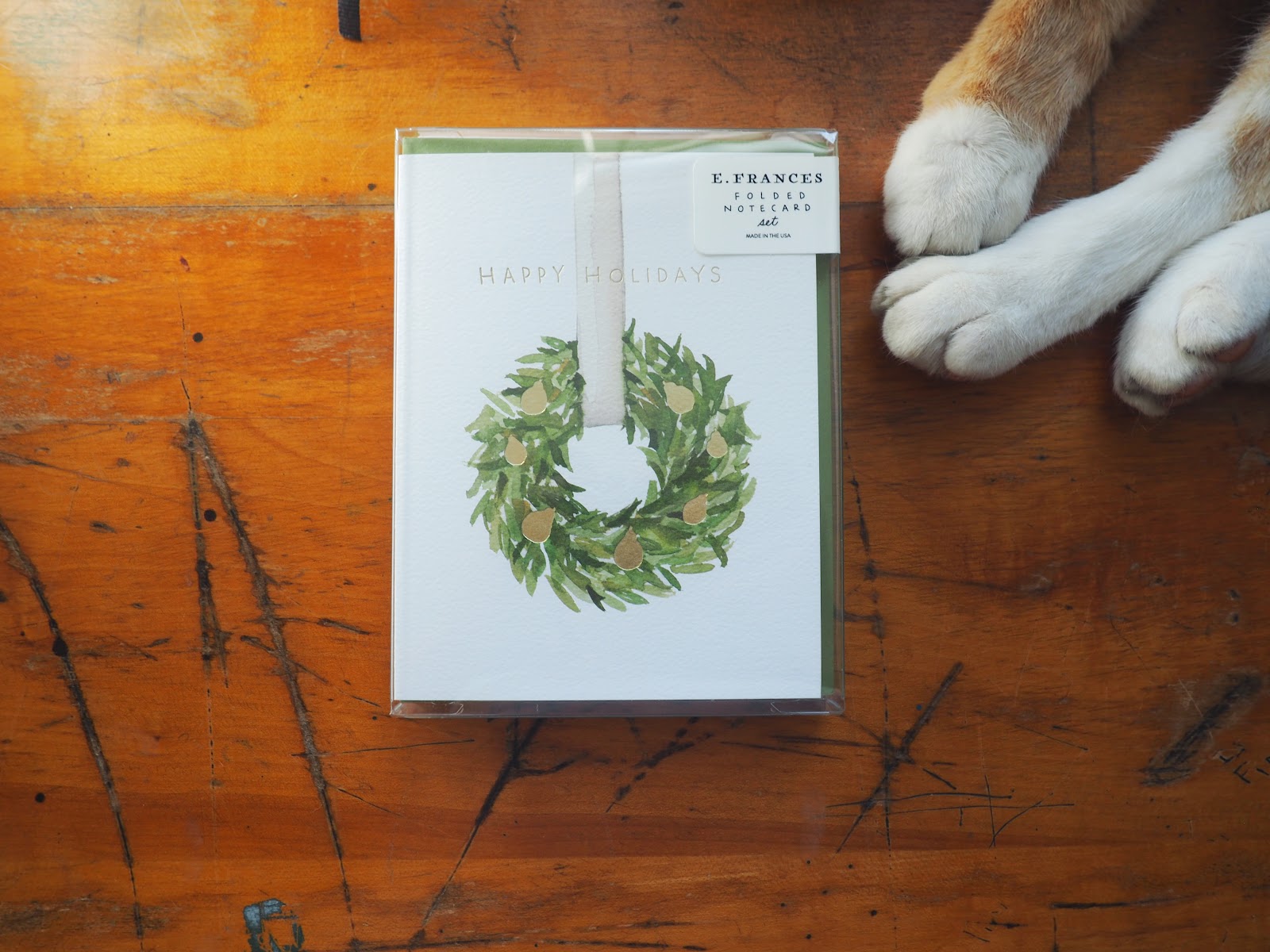 Canada Post has released its holiday stamps, and it’s always fun to visit your local post office to see them in person. Of course I got one of each booklet of the Christmas ones, even if this year’s are not my favourites. It’s hard to beat the Maud Lewis ones. In fact, they’re so good I feel like they should’ve brought them back this year instead. Who am I to crush anyone’s reindeer spirits, though. 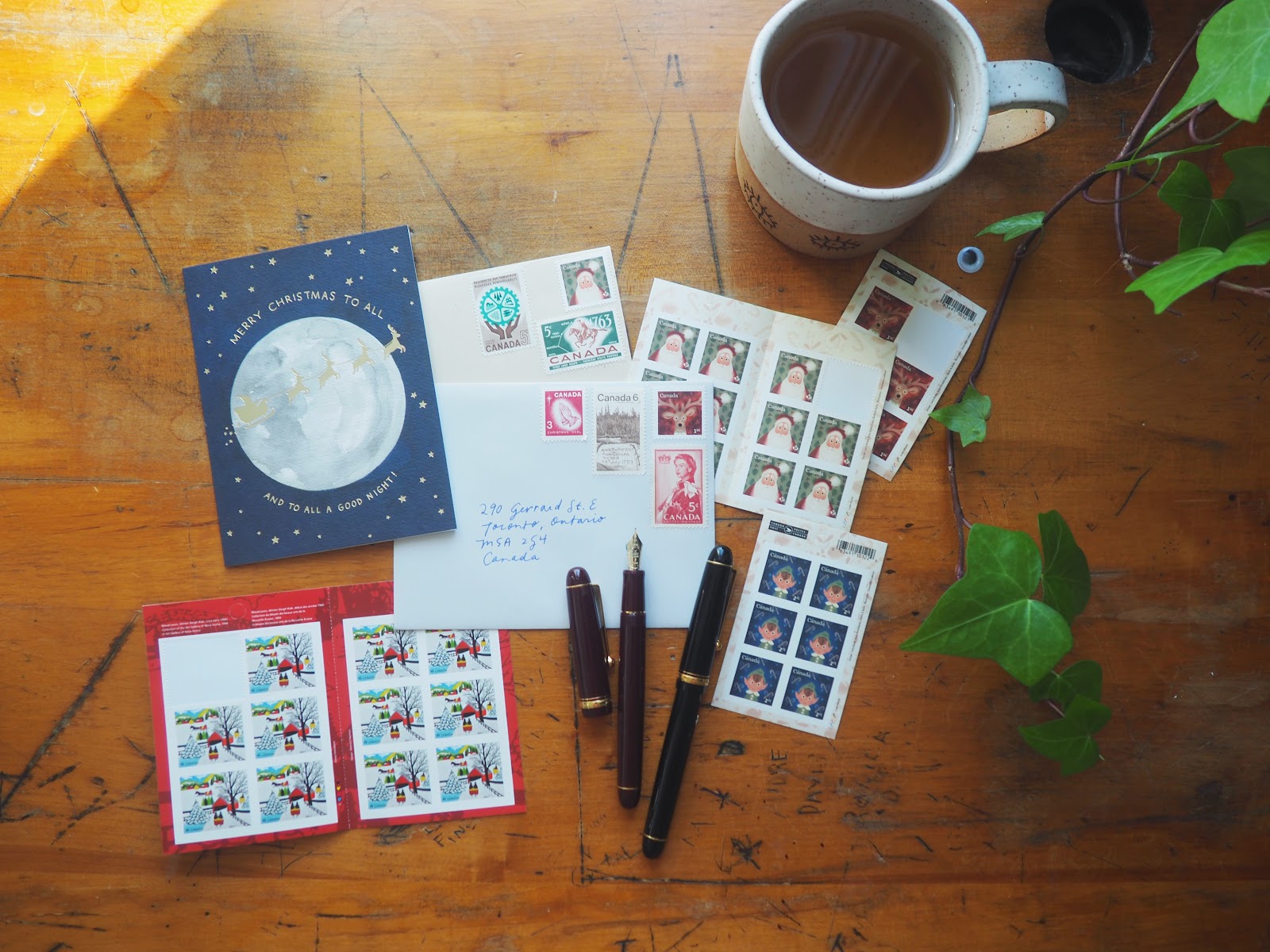 And here, I thought I’d also share that I finally found a home for all of my sealing wax things (wax, broken lighter, seals, matches because my lighter is broken), which is in this canvas Superior Labor pouch. Since I now have a place to put it all, I’ve found a surprisingly high number of partially used (or barely used) nubs to collect together, all my waxy orphans. 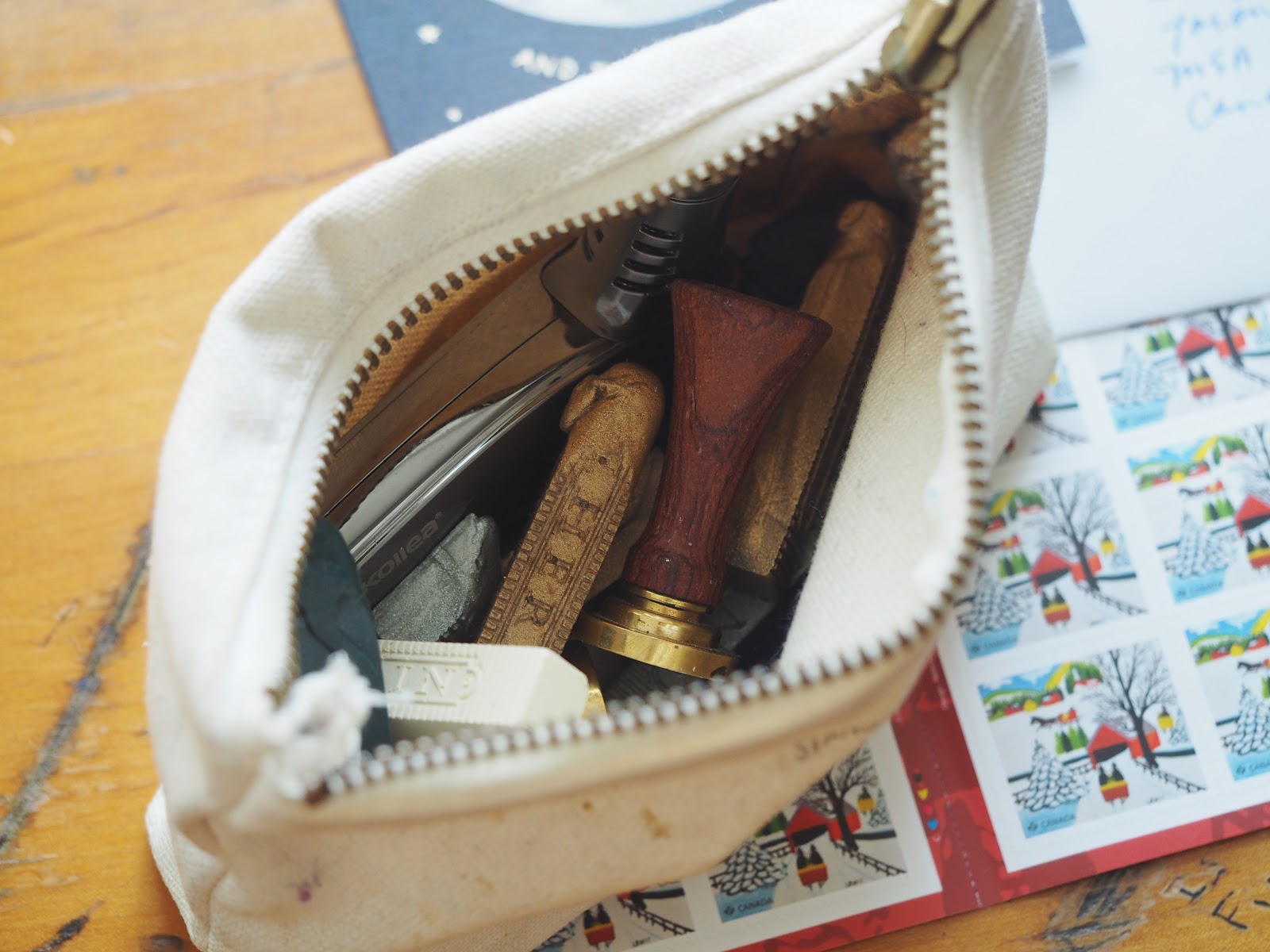 It is a very precarious game, ordering Christmas cards, or any other seasonal items, trying to predict how many people will be interested in sending Christmas cards out this year, especially since lots of people aren’t in offices, giving cards out in person. We had ordered them fairly early (especially for us, hah!), and we’re now reordering, an even more precarious business.

Perhaps at the beginning of the pandemic, not quite at the very beginning when everyone was in shock and confusion, but as things settled in, there was a curiosity and energy towards finding ways we could connect with each other, and snail mail is such a meaningful way to do that.

Here we are, nearly two years in, and there is some exhaustion in all of us. The other day I stood on a chair and looked on top of my fridge, the dense furriness of it, and felt the overwhelming sensation of being buried under a film of dust and never rising again.

That all being said, nothing says Christmas cheer or I’m thinking of you like a holiday card in the mail, or in someone’s mailbox at work, for those of you still going into the office or schools or buildings. I remember the office administrator at my first school would always be the first one out with her Christmas cards, and one day in early December, they would all be stacked neatly in the teachers’ mailboxes, along with their attendance folders and memos and phone messages.

It can be especially nice to leave an extra message about a favourite memory or something you’re looking forward to doing with them soon, or else just some good wishes that we’re all trying to spread around, for a year ahead with the right sort of excitement, for enough space for the types of connections that matter, or for the more prosaic, like air that isn’t too dry in the winter, or cats who can get along. 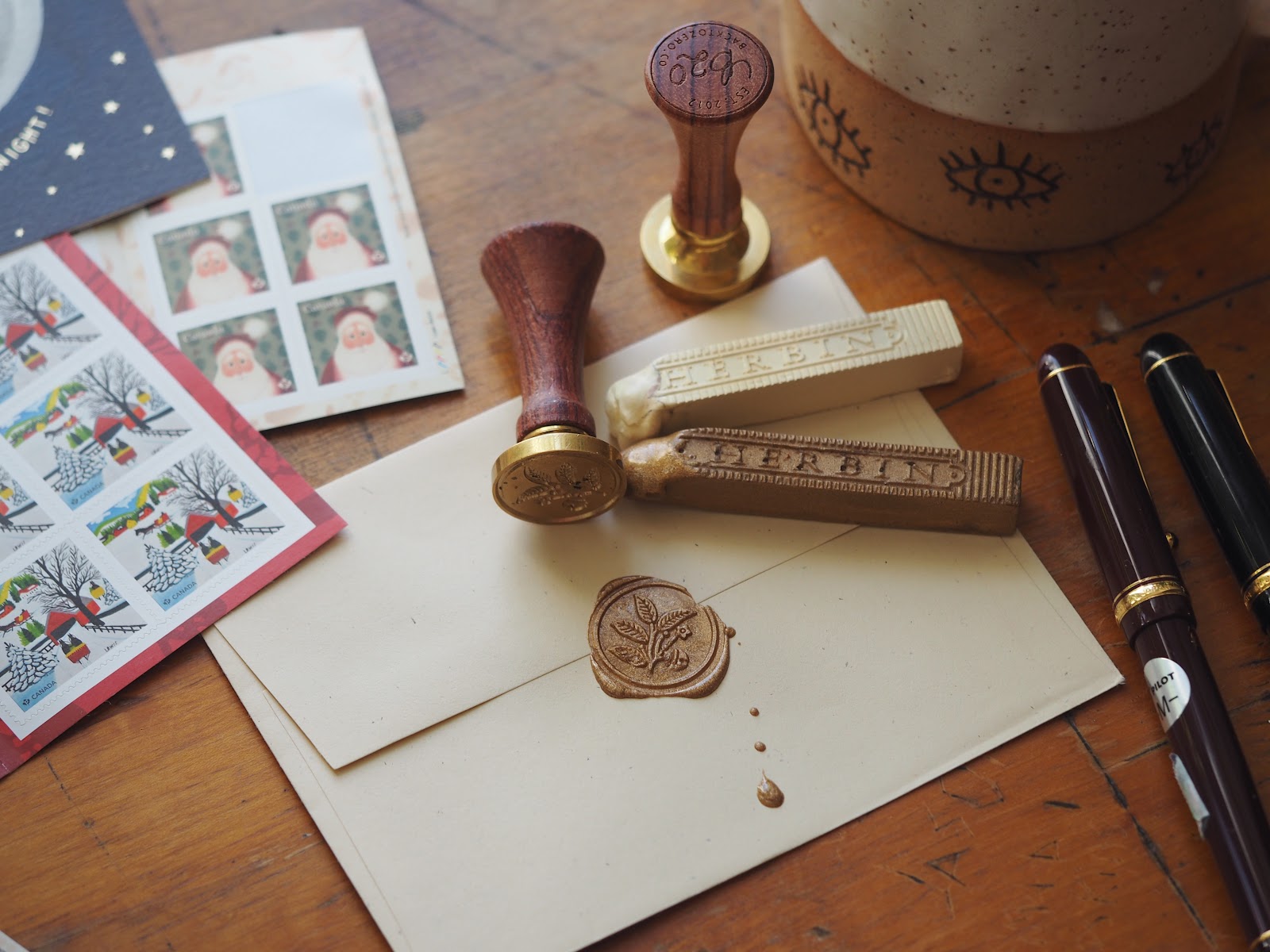 Last time I looked (couple of weeks or so ago), you could still get the Maud Lewis stamps in Canada Post’s online shop. Just saying. Ho ho ho!