Camping in the Fall

Camping in the fall is my favourite because you mostly avoid the mosquitoes, although even in cold weather they find their way to you, those miscreants and ruiners of a good time. Aside from the mosquitoes, in many ways, camping in the fall is nice because you can huddle around the campfire with a hot drink, or not feel quite as grungy and sweaty after several days without a shower.

It’s also nice because with school starting back up and the weather cooling down, the campsites are almost empty, along with the beaches and trails. Even aside from Covid and social distancing, it’s a different experience when you’re out in the woods alone. 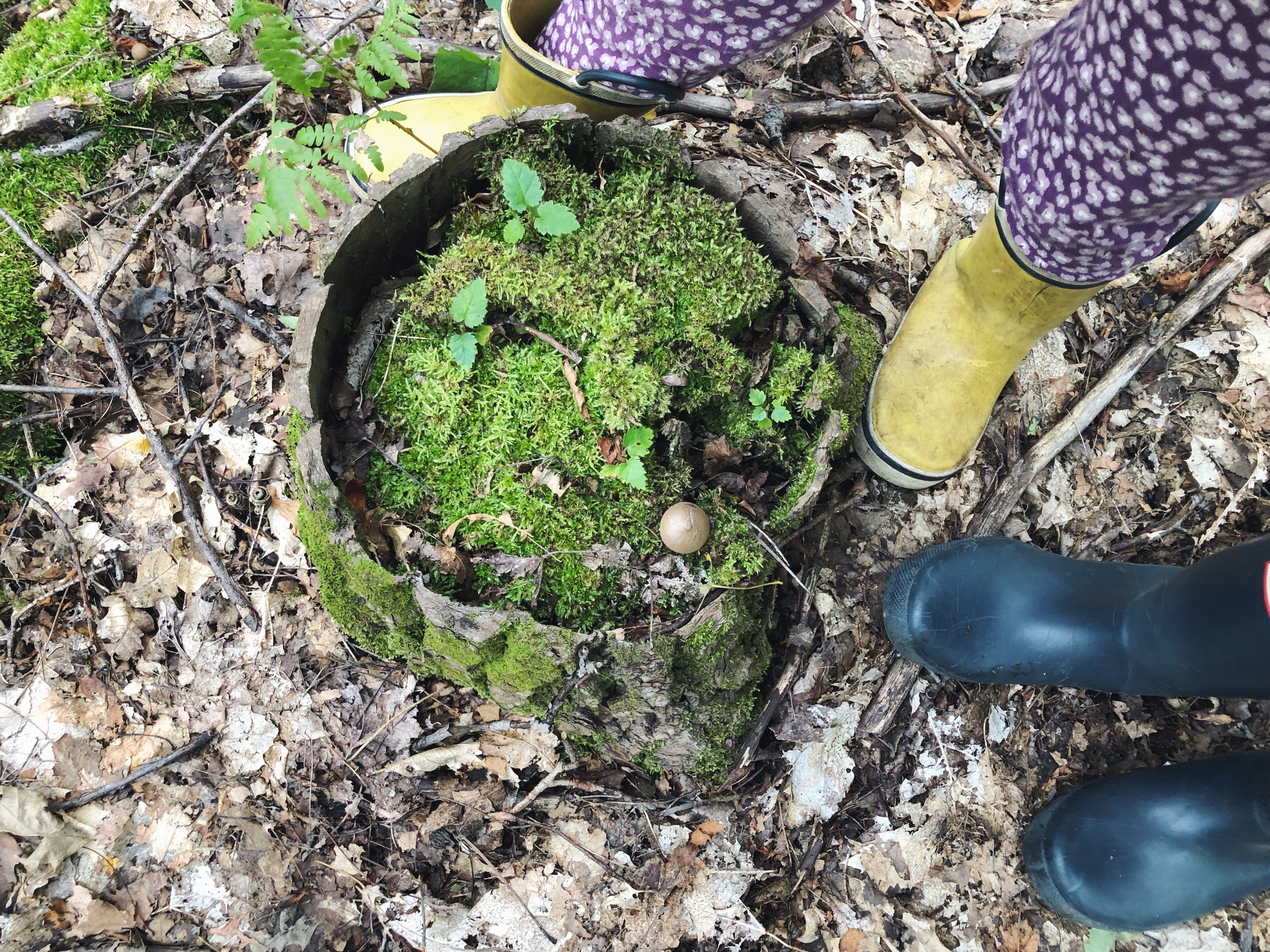 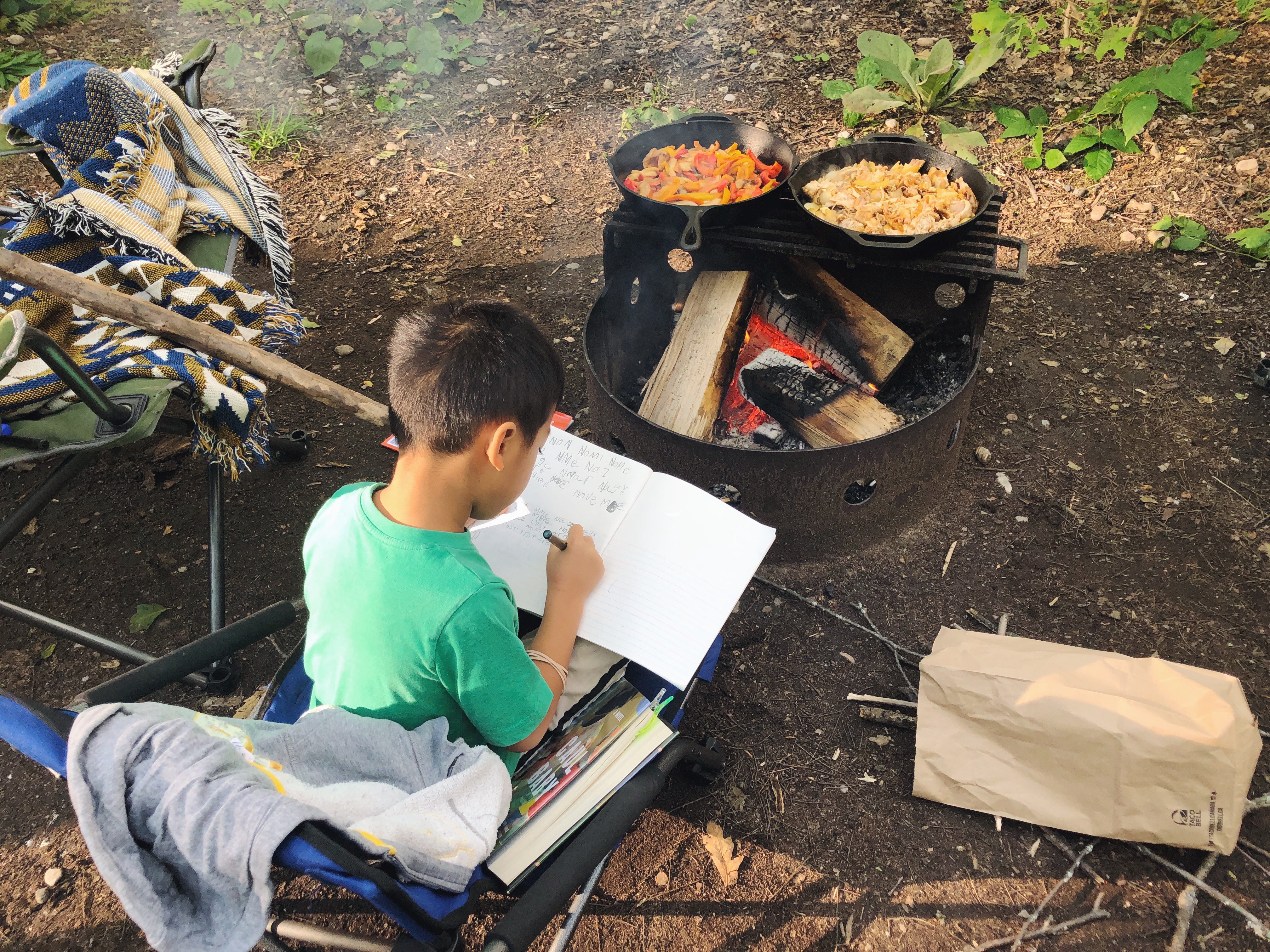 Caleb, alas, had a bit of homework in part because he missed some school and his teacher assigned some work, and in part because I need to make up for my insufficient tiger mom status every once in a while. Naomi also had some “homework” which involved tracing and letters and numbers and “Mama Mama Mama Mama I just don’t like doing homework.” Caleb didn’t get away quite so easily, and while we still didn’t get as much done as maybe we should’ve, we live to study our spelling words another day. I know (/hope) it’s different when the kids are in school, at desks, with a teacher looming over them, tapping a ruler in the palm of one hand menacingly, but it takes a lot to motivate yourself to motivate your children. 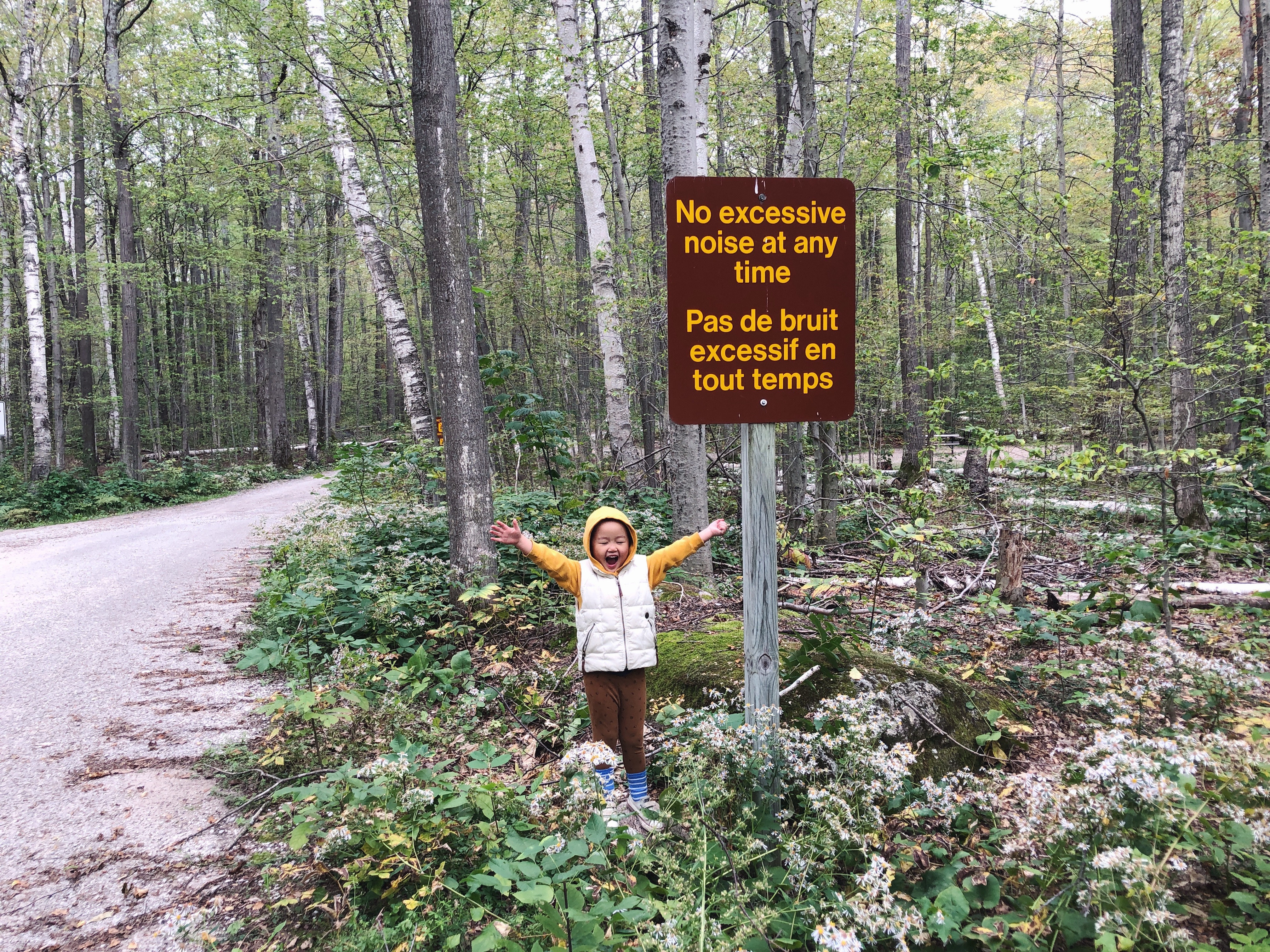 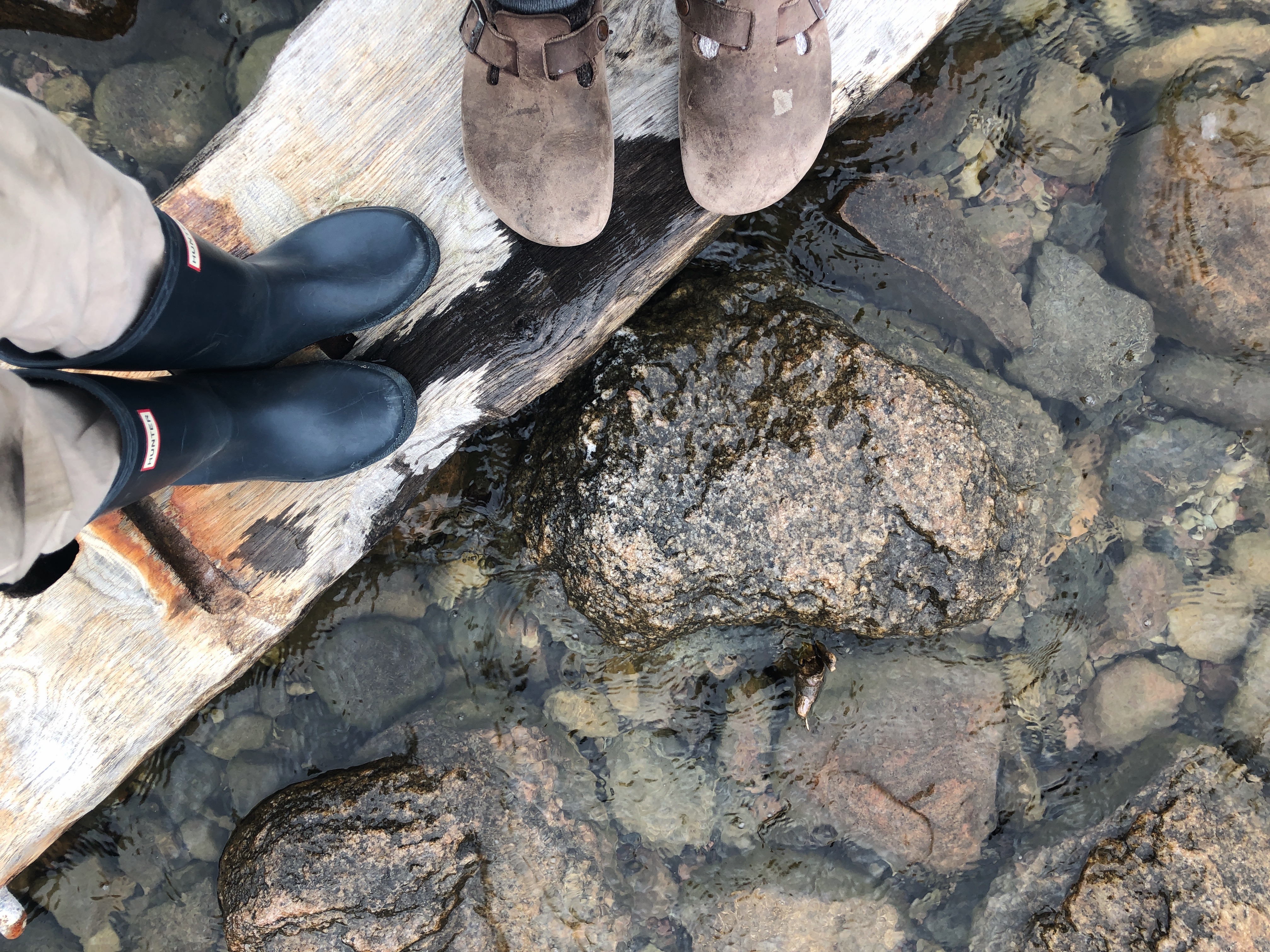 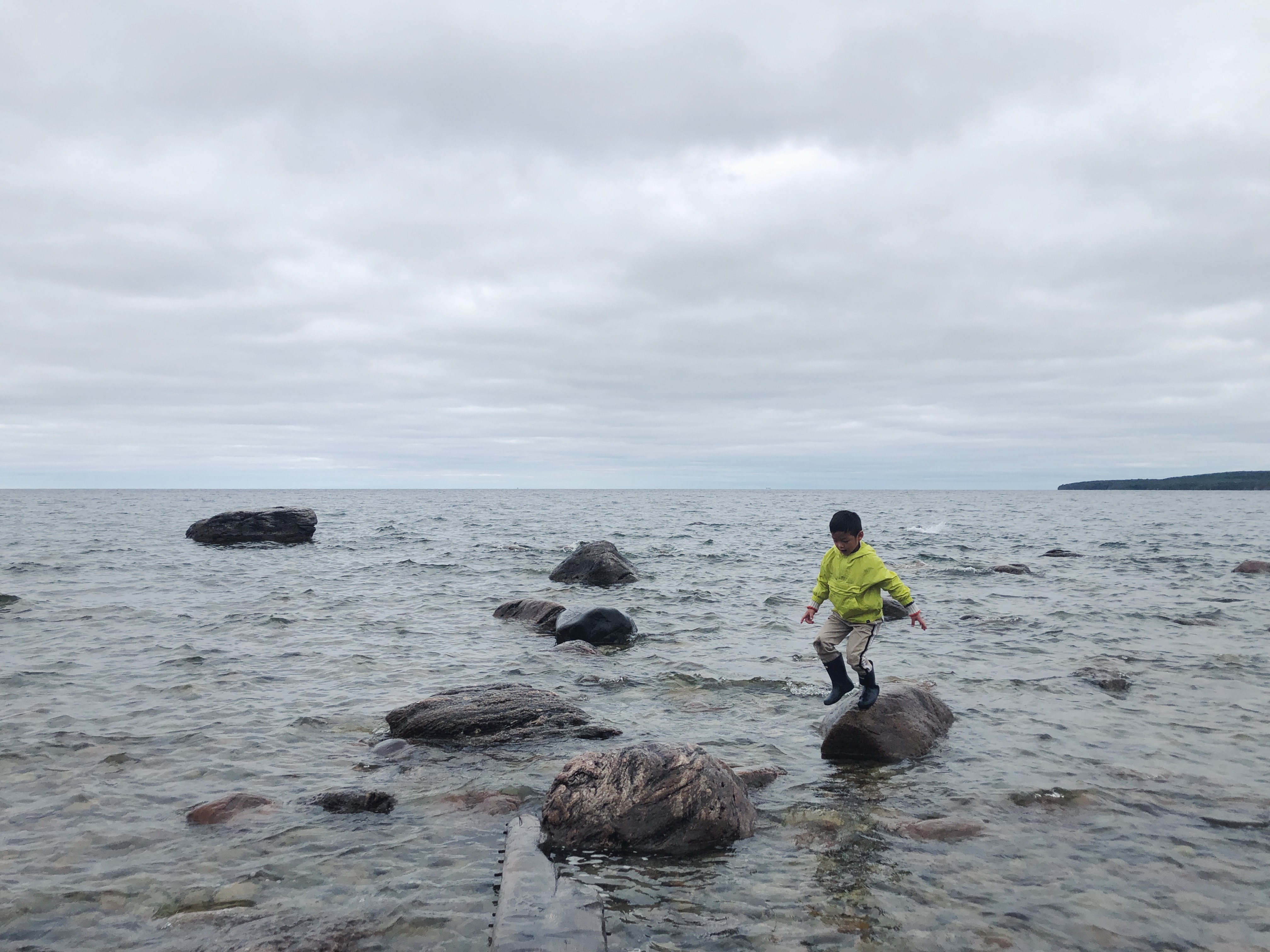 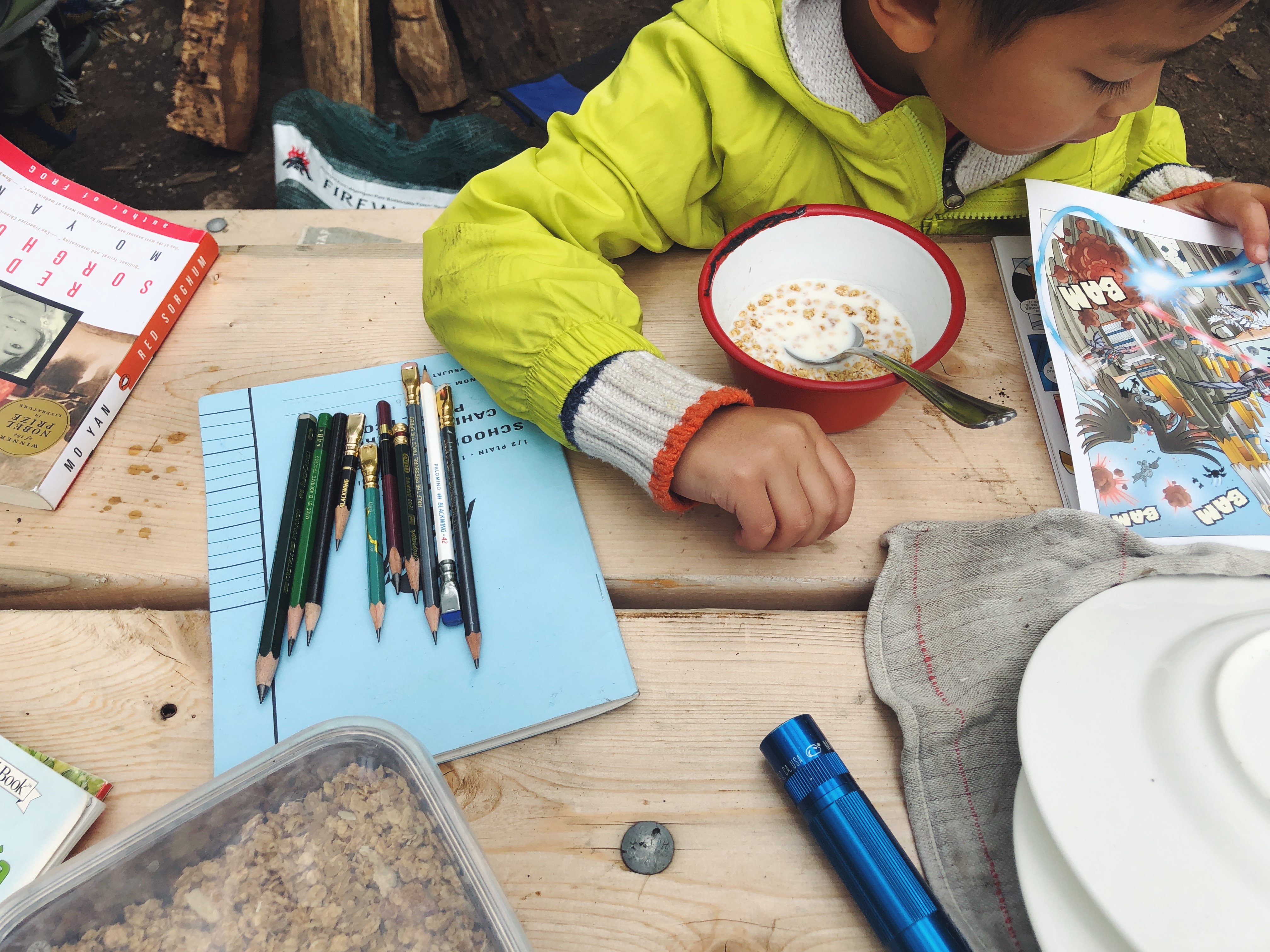 Caleb, making up for his lack of school work by at least reading. Bam Bam Bam. Me, sharpening my ambitious supply of pencils in preparation for everyone’s emotional and mental return to studying. 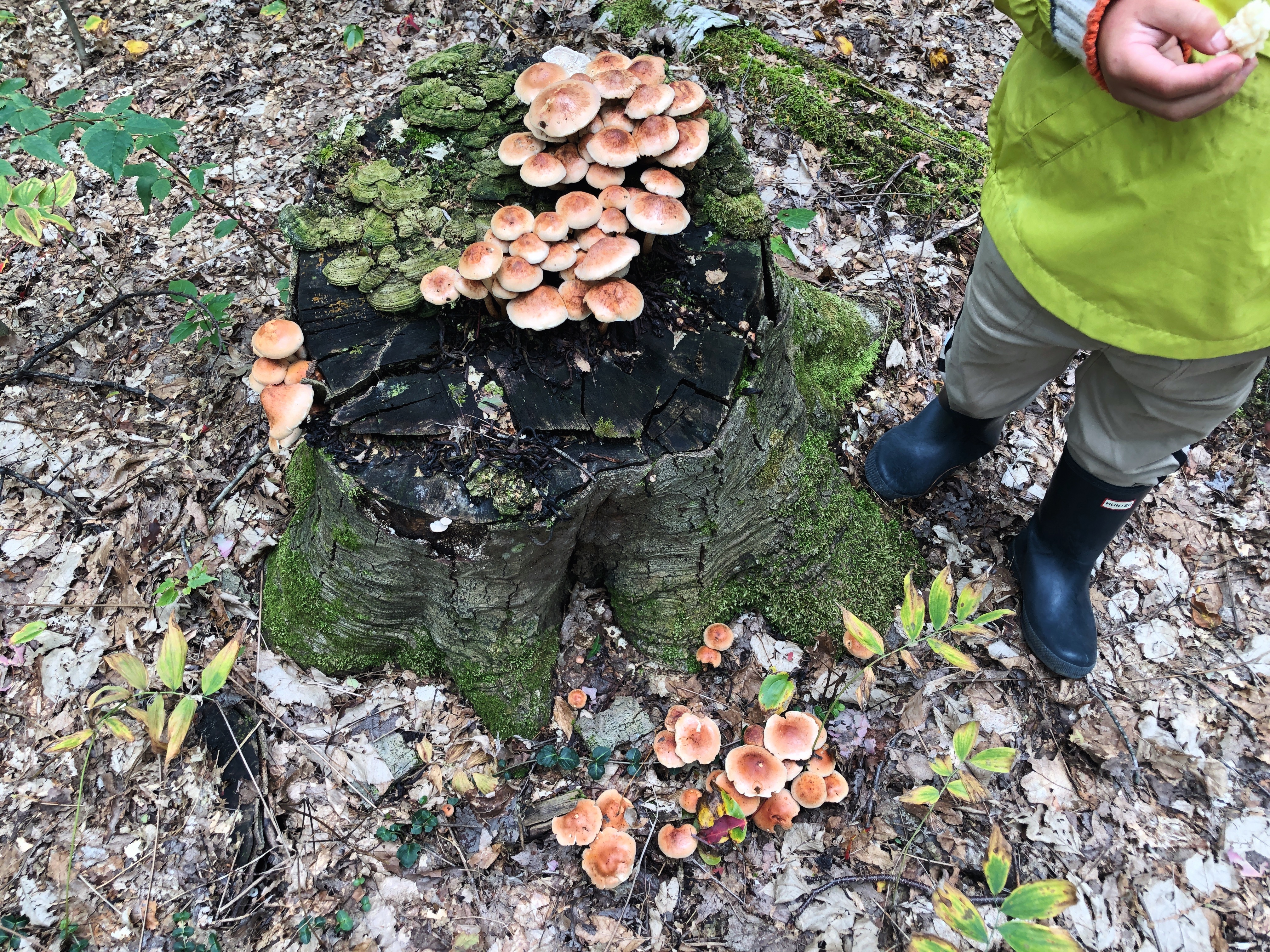 There were mushrooms everywhere! What bounty. The park was going to hold some sort of workshop named “Fungus Among Us” and I was tremendously disappointed to find out that it was going to be in another week. Caleb was ambivalent about what a workshop about mushrooms was going to be like. “So they tell us which ones we can eat?” 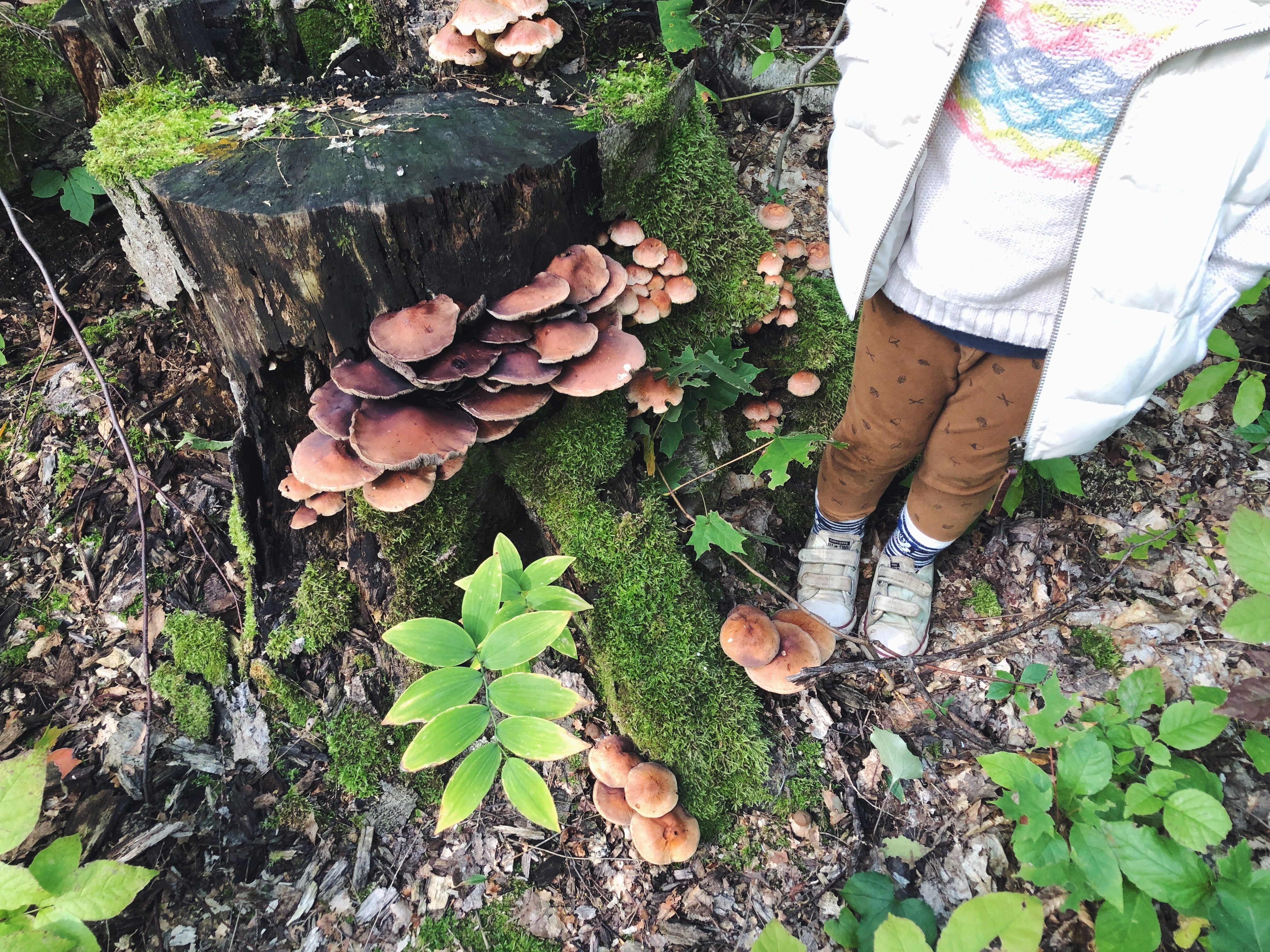 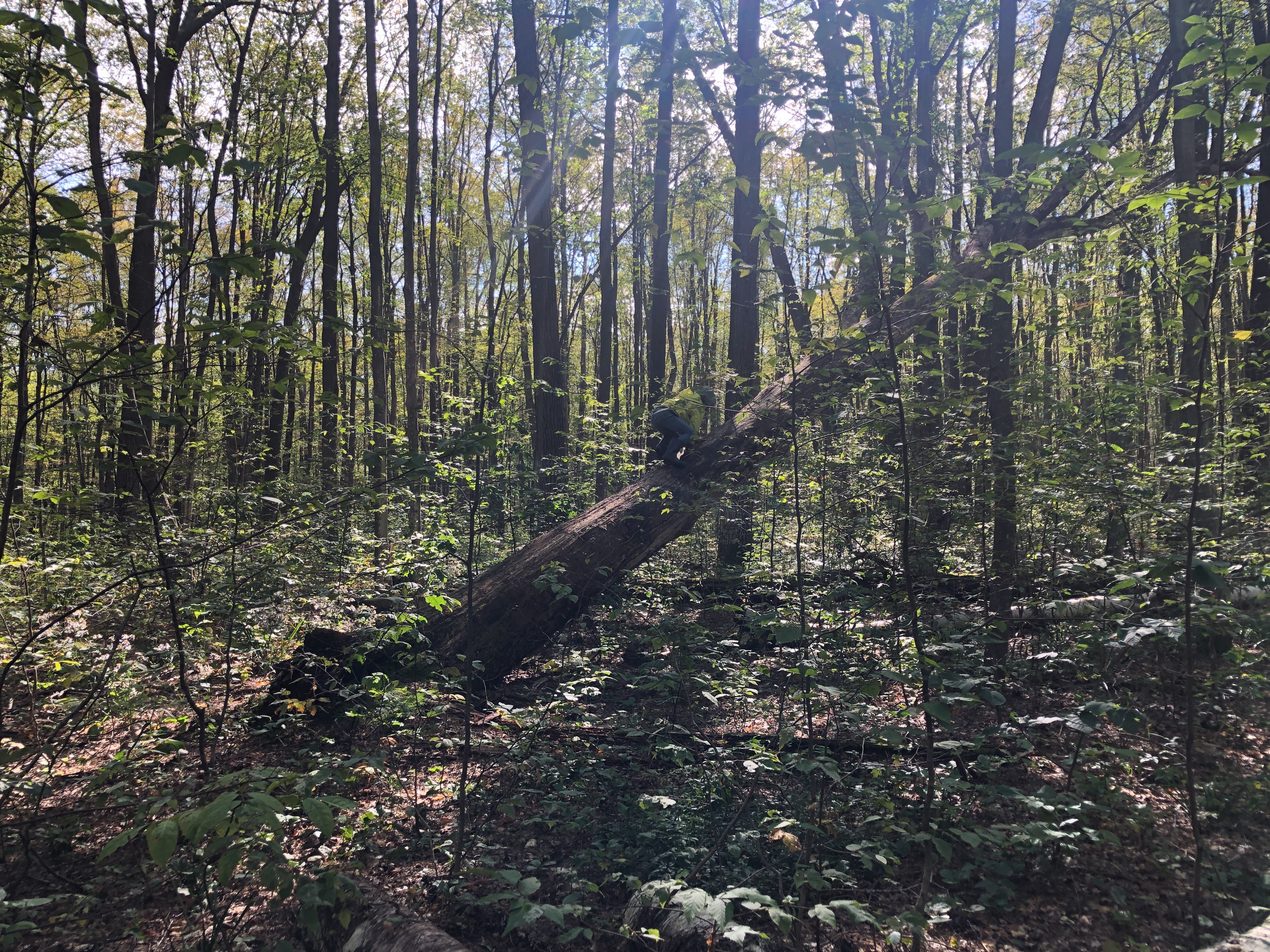 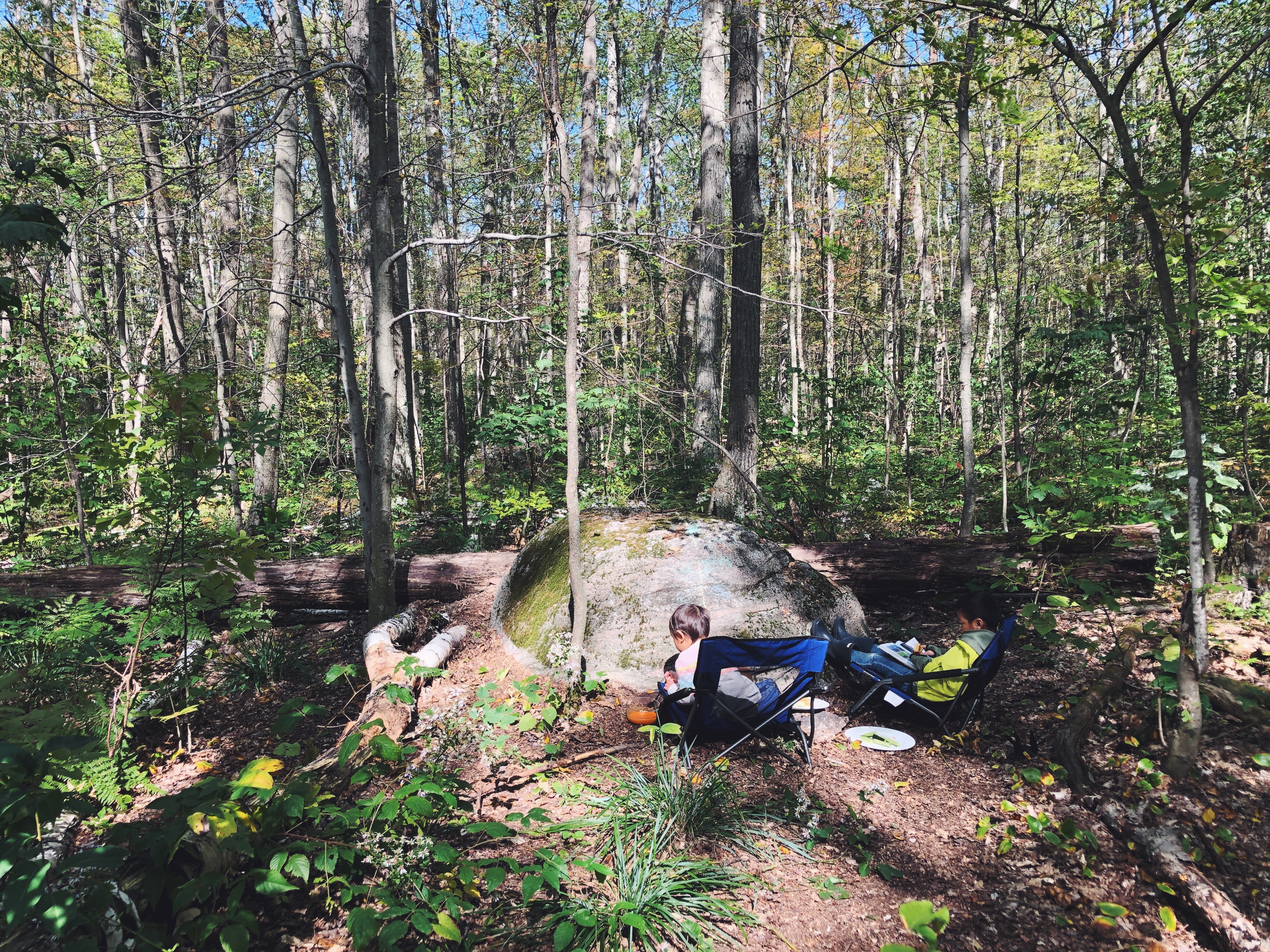 The kids had a great time, climbing things, eating out in the bush, poking sticks into the fire. They spent a lot of time out by this big rock, including doing such things as eating their meals there, trying to put their chairs on top (one fell off and bumped her head) and peeing on it to “mark his territory,” the call of the wild irresistible.

We still made it to the beach, which was mostly empty, although on the weekend we saw a few brave swimmers—out in Georgian Bay in October!—but we mostly just rolled up our pant legs and got our feet wet.

It was beautiful out there, of course. The parks are kept pristine, no litter on the trails or detritus floating around small ponds of murky liquid. All that water, there is nothing like it. 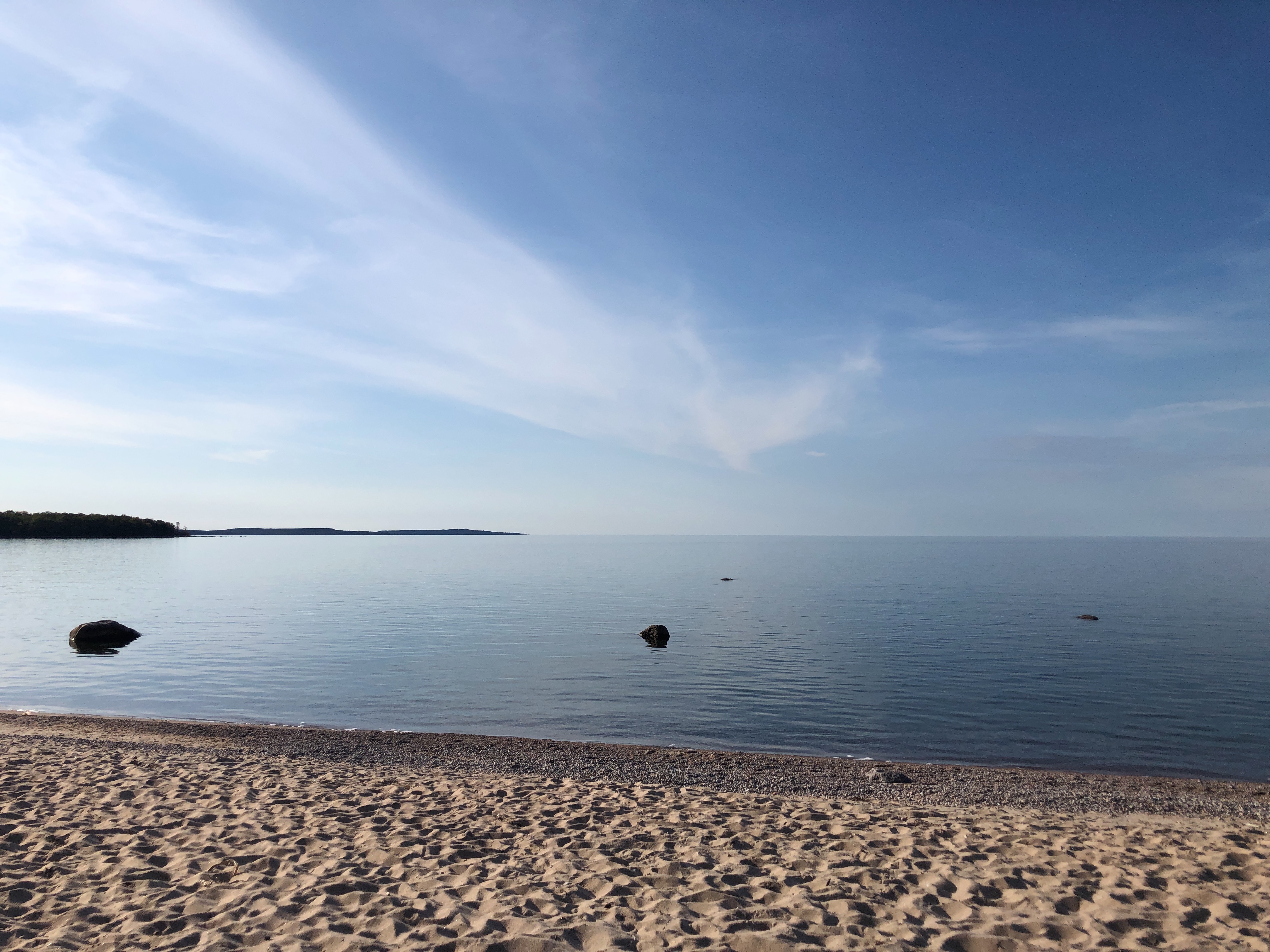 I started this blog post actually a week ago and things got away from me, unexpected meetings, unexpected errands. I know a number of legitimately busy people, and so when I say my days are usually filled with various unimportant things, I’m speaking on a scale. I spent an entire afternoon fiddling around with quotes about cats. I procrastinated for ten minutes before finally settling down to start writing this by moving around some folders in the drive. The days move slowly and then before you know it you are blinking and you are wondering what sort of Christmas stamps Canada Post is going to be releasing this year, despite having sorted through last year’s Christmas stamps just the other day.

But we march on, looking ahead. There is lots ahead, some of it daunting, but we are grateful for this opportunity to be where we are. The excitement and cheer of the holiday season, continuing to see some of you in person, continuing to welcome two cats into our home, hoping and looking forward to the best of what’s ahead.

This looks so beautiful. I love the shot of your son playing on the rocks by water.

Beautiful pictures! But, more importantly—how did the cats do?

Love this blog, the photos of the “intrepid” campers, the beauty of Georgian Bay, the “rock”, the Snazzy yellow boots and purple pants (way to go Miss Naomi.. loving your fashion sense!) sorry you missed the Fungus workshop .. even if it wasn’t high on “someone’s” list 😆; glad you all had such a wonderful time.
Thank you for sharing your marvellous stories.. look forward to eventually reading your book ..you do need to write one.. wonder “turn of phrase” as my Aunt would say.
Have a happy time ahead preparing for joy of the holiday season.
Blessings… Sonnia

ps: I’m just about to check out the Christmas stamps on the Post Office app. 🎄☺️🎄(motto.. Be Prepared) ❤️