I haven’t been this excited for a Blackwing Volume in ages, although I’ve come to understand that this Volume is actually a bit of a polarizing edition.

Volume 64 is the Comic Book Pencil. I love the colours and the patterns, I love that the pencil will change as you sharpen away at it, eating away at the neon yellow, then the green and so on. What fun! It celebrates comic books, has bright colours in that distinctive half-tone, and there are even matching erasers and point guards.

Here is the info on the pencil from Blackwing:

In 1837, Swiss teacher Rodolphe Töpffer published a collection of illustrated stories chronicling the adventures of a character named Mr. Vieux Bois. Each page featured six panels with images and captions to convey the action and dialogue. It was unlike anything readers had seen.

In the 200 years since, comic books have evolved from a niche medium to a comprehensive storytelling device. Comic book writers, pencilers, inkers, letterers, and colorists have birthed iconic characters, explored profound topics, and deftly blurred the lines between pop-culture and art.

The Blackwing 64 is a tribute to comic books and the minds that bring them to life. Each pencil features a halftone design that’s a nod to the 64 color palette utilized in some of the earliest comics. It also features a unique doubled imprint inspired by comic book lettering. Its firm graphite is perfect for sketching a new character concept or writing a list of their super powers. 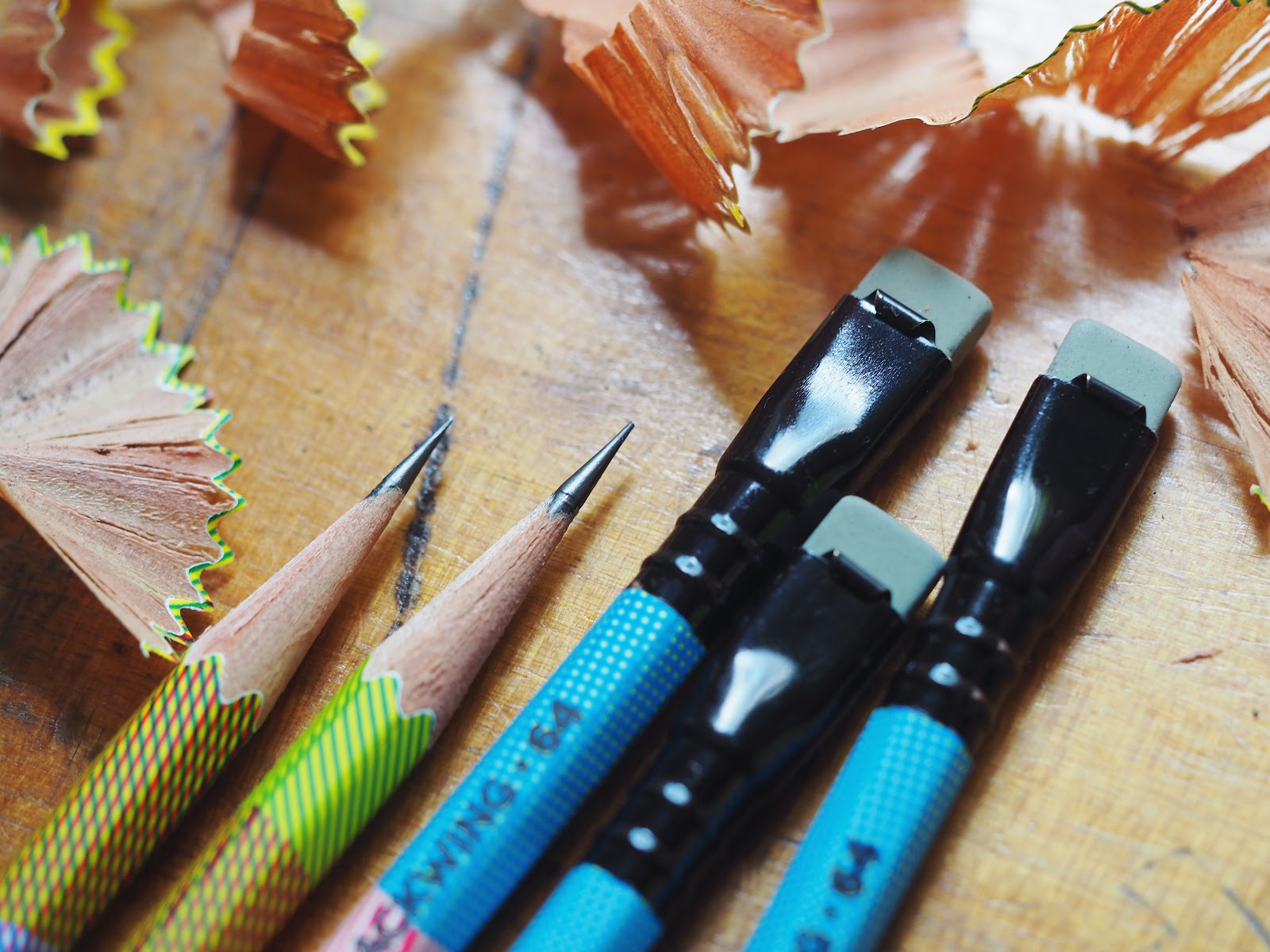 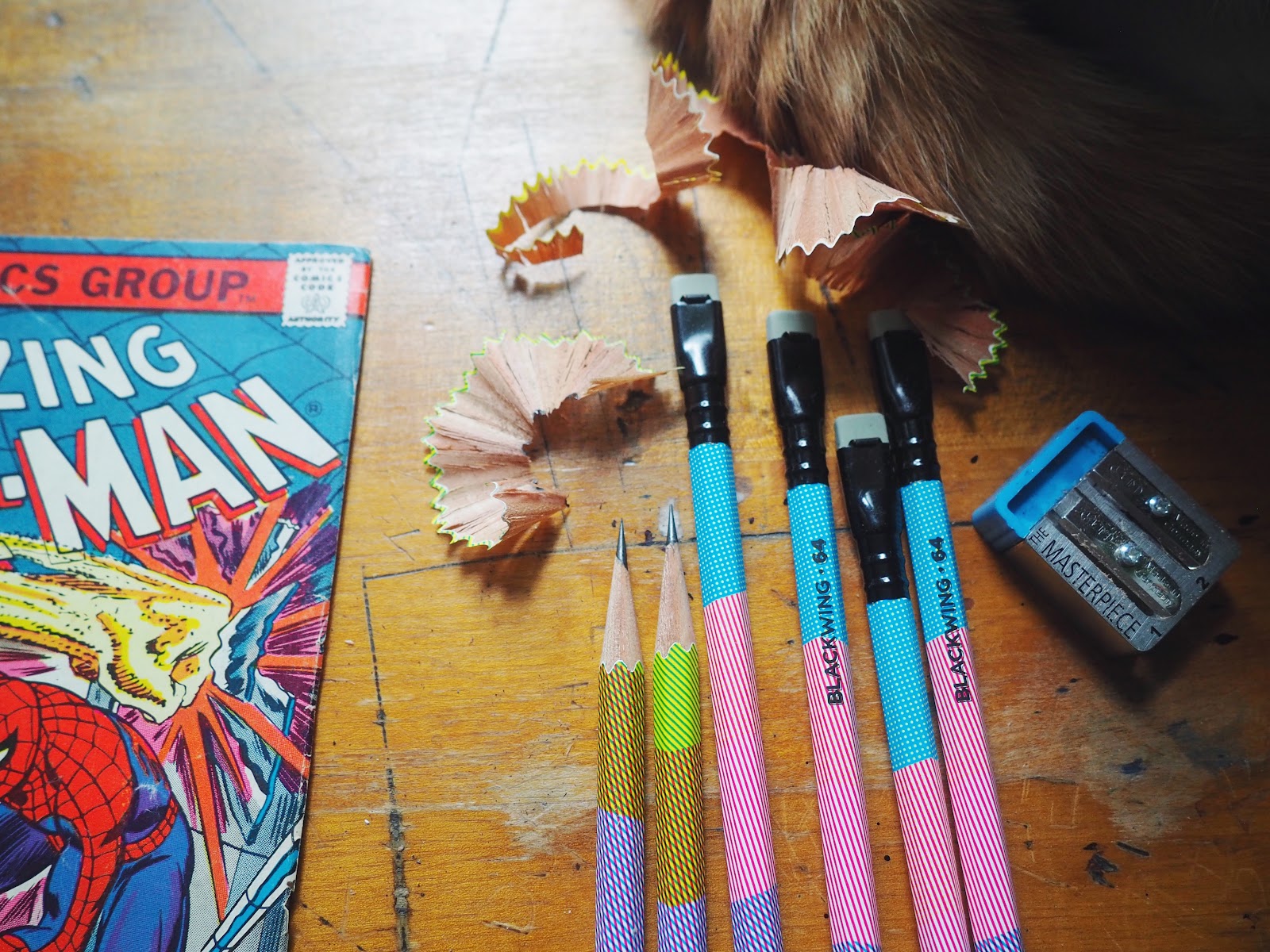 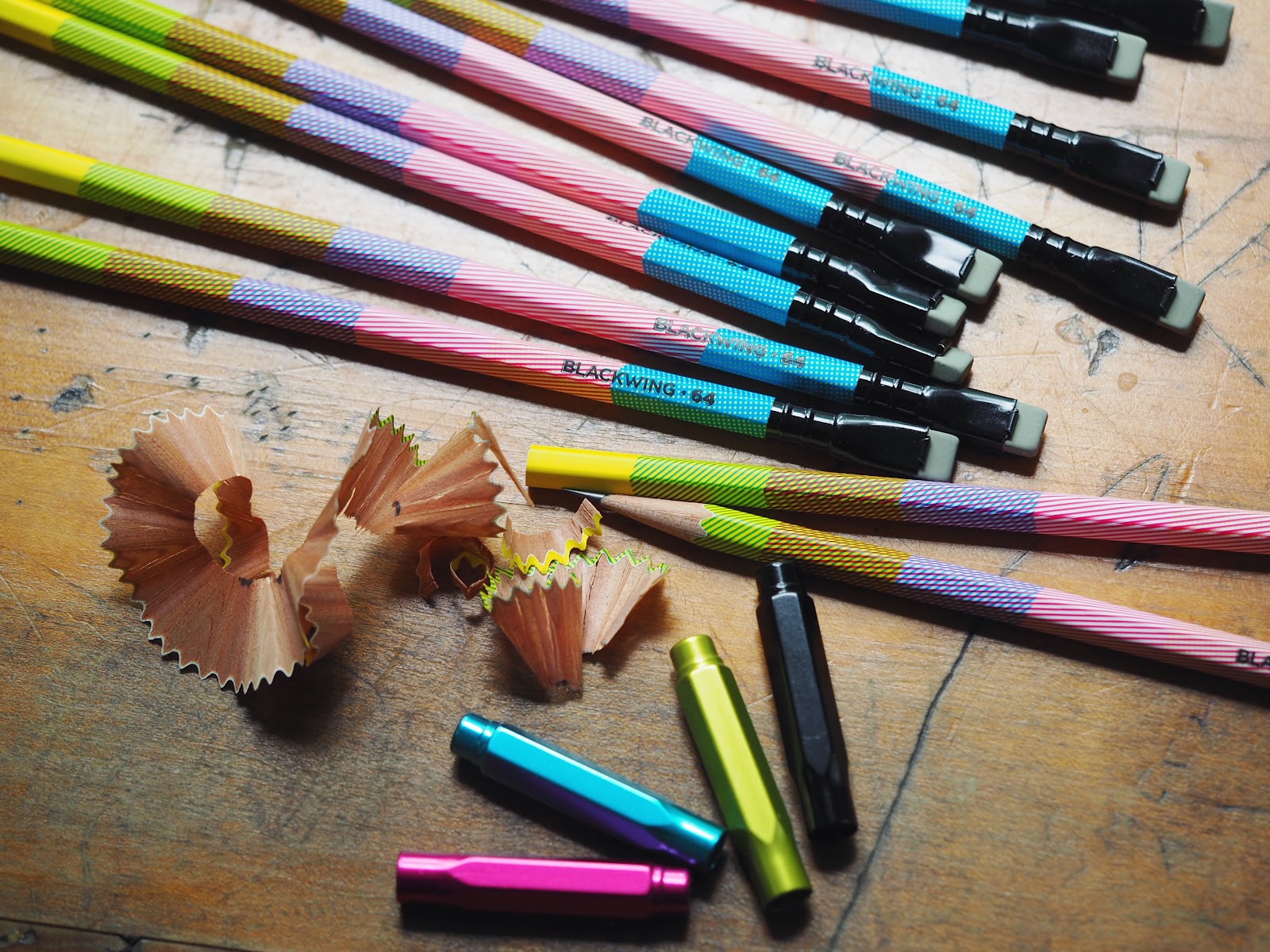 Brendan from the warehouse pointed out to me that the point guards are a great deal compared with buying them individually, since they’re $25 CAD for the set of four, versus $13.50 each in the standard colours. 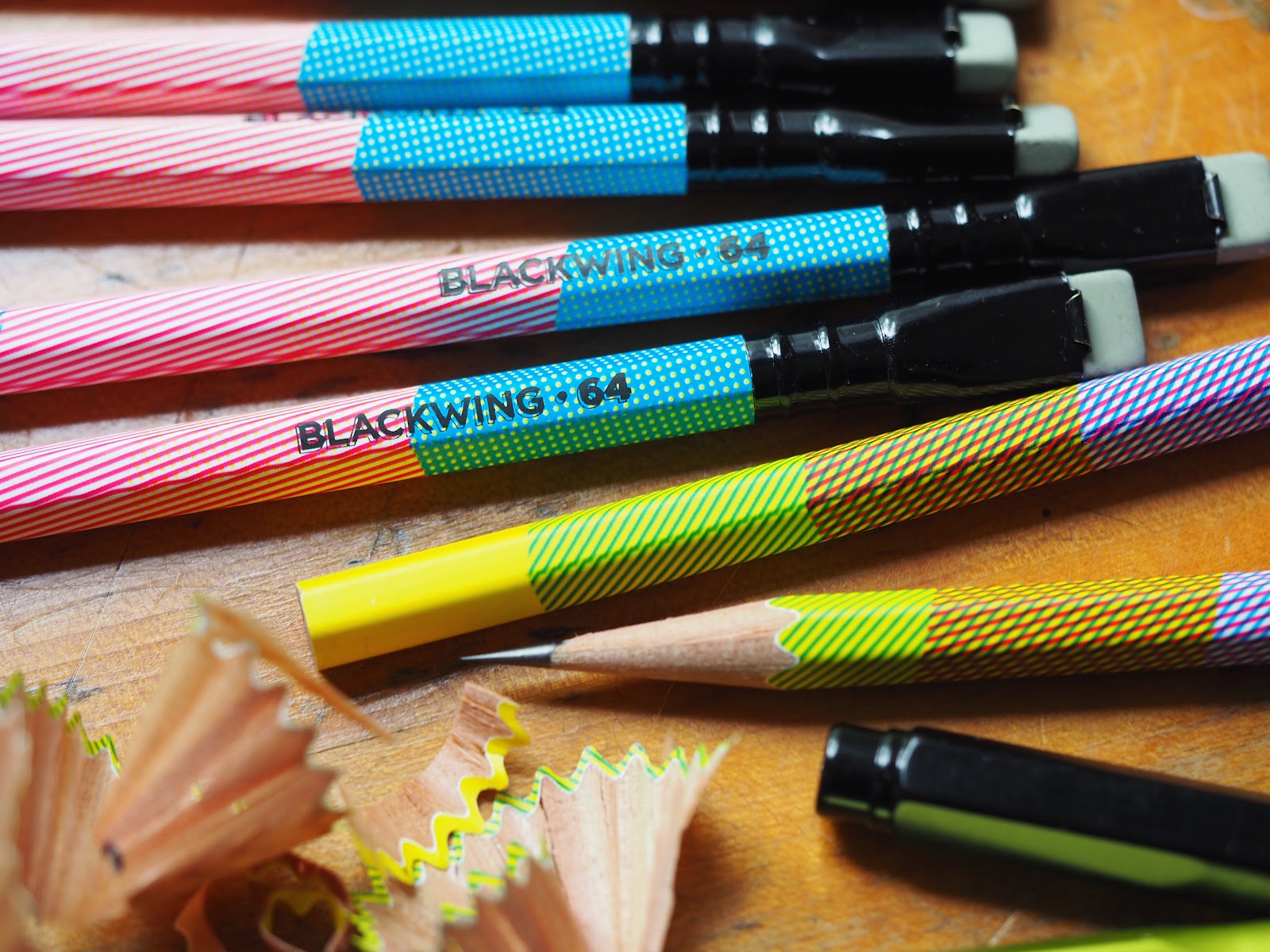 Most people get the Volumes based on the design or the theme, if it’s something that is personally significant for them, or if they just like the look of it. This Volume would make a terrific gift for an illustrator, graphic designer, comic book reader or artist.

I’m saving a box of these Volume 64s for when he’s a bit older. I’m not sure if he’s going to have moved onto chapter books or something else by the time he can appreciate the pencils, or if he’ll still be mostly into comic books and graphic novels, but either way, I think he will enjoy them.

I sometimes get comments or concerns about how I should let Caleb comic books, and I love these because I am in full agreement. I’m mostly concerned that I’ve come across as so snooty. I love that Caleb loves to read and that he loves to read comic books or graphic novels. I will continue to buy and borrow them for him, even the ones I am ugh about, for as long as he wants to read them. That being said, I do hope that he eventually also finds his way into chapter books because I don’t want him to miss out on some of the good stuff that’s out there. The Phantom Tollbooth! Harriet the Spy! Treasure Island! Bridge to Terabithia! Or whatever else he might end up getting into. Or even stuff that he’s so-so about but that maybe will open up his mind a little, or throw him off a bit, or take him somewhere new. I want him to be game for going anywhere in life.

Not every book that I read with him at night is going to be a winner, although there have been a few of those. Once, when I was still figuring out what Caleb could and would listen to in chapter books, I had jumped the gun on Bridge to Terabithia, and he fell asleep while I was reading it out loud to him (so, not a winner), and I just gobbled it all up on my own beside him, with that horrifying, gut-punch ending that I knew was coming. The next night we moved onto something else.

In any case, here’s an old photo of Caleb, from virtual school, 100% focused on his learning, a statement made both ironically and not-ironically. 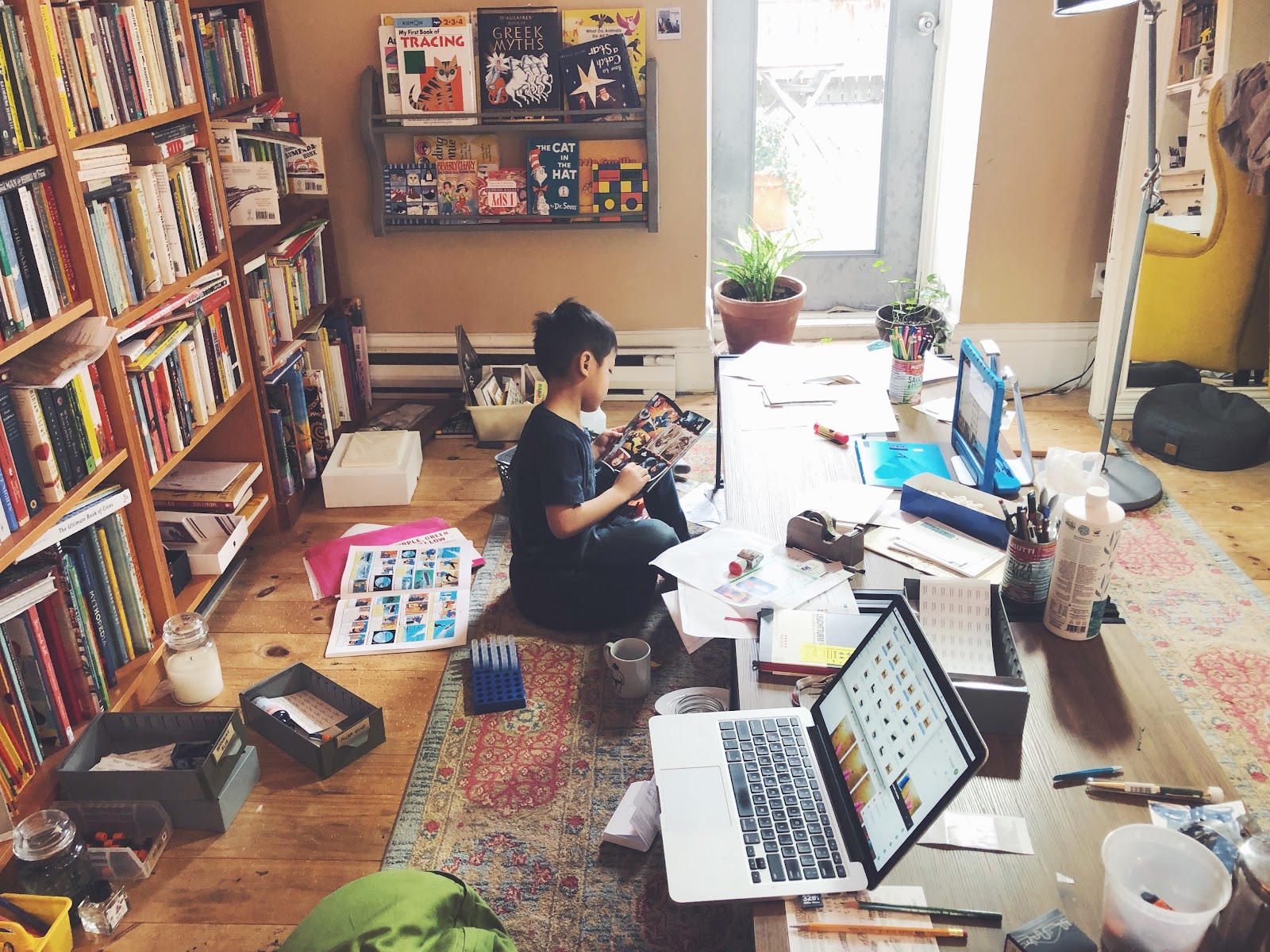 I can still remember my 3rd grade teacher reading aloud to our class. Not all the books that were read, but the fact that it happened. And that as a class project we picked a scene from “The Magician’s Nephew” and then 12 were chosen to be made into a calendar.

Much too early for Caleb, but he might enjoy later (and you might find interesting now) and a couple books I read recently by E.K. Lawrence. “The Story of Owen” the subtitle of the first book is “Dragonslayer of Trondheim” and the second is “Prairie Fire”.