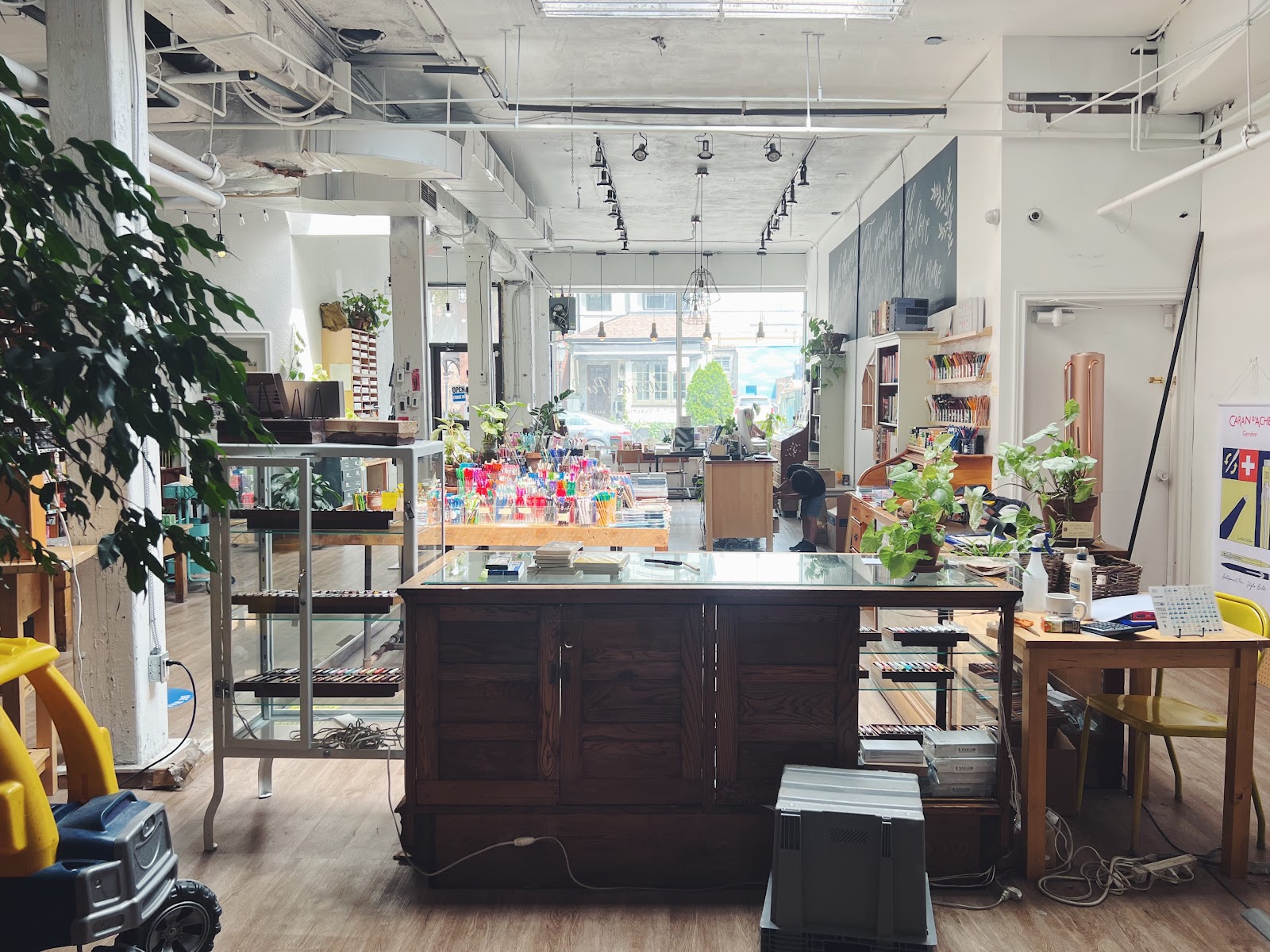 On Friday, the shop was closed for the Canada Day statutory holiday, and I have now become a visitor to my own stationery realm. We packed up the whole zoo (minus the furry animals), and took over while it was empty.

Usually when the shop is closed and it’s just the family, we let people in who knock at the door for a spontaneous browse, but it was truly a zoo with the family now. Unsuspecting would-be customers came up to the door, curious, holding up their ballpoints in the air, and then fled upon viewing the scene inside through the thankfully shatterproof glass. I’m not sure when it’s going to normalize again, but it certainly does not seem imminent.

But also, it was fantastic! What a day. I ride again! The main reason was that the baby entered in a serious, deep nap in Jon’s dark, windowless office for several hours. It was amazing—truly amazing—and I had to go in and check on her because it seemed so unbelievable and also somewhat concerning.

We got take out from Cafe Diplomatico, I investigated all of Brendan’s post-it notes on the shipping table, I admired the stacks of boxes. I forced Jon to open and count a few shipments that had arrived and had not yet been opened so I could inhale that fresh stationery smell and then make disorganized mental notes about which ones I was going to take photos of or write a blog post about, my mental notes two days later having frittered away into the wind.

One of my favourite tasks in the shop is making mystery pen surprise packs. I break out Jon’s calculator from the office, assemble my boxes of pens in front of me, and drift off into my imagination, the future beholder of pens opening this exact paper bag of mystery, wondering how they will test them out (scribbles? Signatures? Doodles of animals?), if they are going to share their pens, which pens they will like the best, if they will like the same as the pens that I like the best, and if that is so, if they are a kindred spirit, connected to me via this little paper bag forever and into eternity. Each one a little package, carefully balanced between office seriousness, fibre-tipped delight, and a pop of colours, designed to elicit a sense of both pleasing surprise and satisfaction, the tools for their life’s work now at hand. 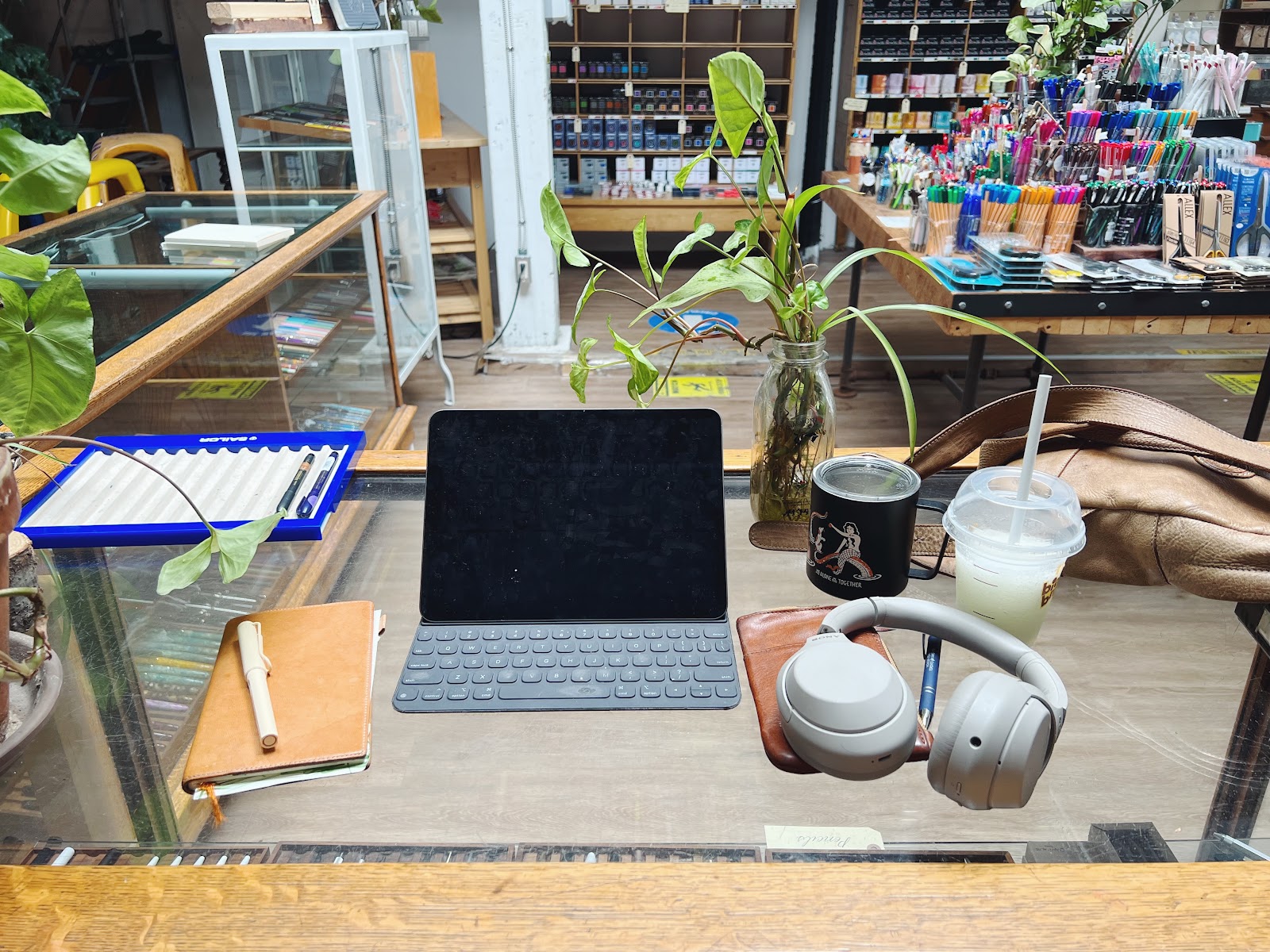 Well, in any case. Let’s not get carried away now. I did a bit of tapping, the kids used the wooden cash register to resell a selection of contraband pens that they stole from Wonder Pens, that they then blackmailed us into purchasing back from them at exorbitant prices. Jon tried to explain the economics of pricing—“Who is going to buy a Sarasa for $18, Caleb?”—but to no avail. What can you do but applaud their entrepreneurial spirit and hope the inventory counts aren’t too far off and that the thrill of a profitable day of criminal activity doesn’t lead your children into joining the triads? Although I’m pretty sure they would need to become fluent in Chinese to rise up the ranks, so pros and cons. 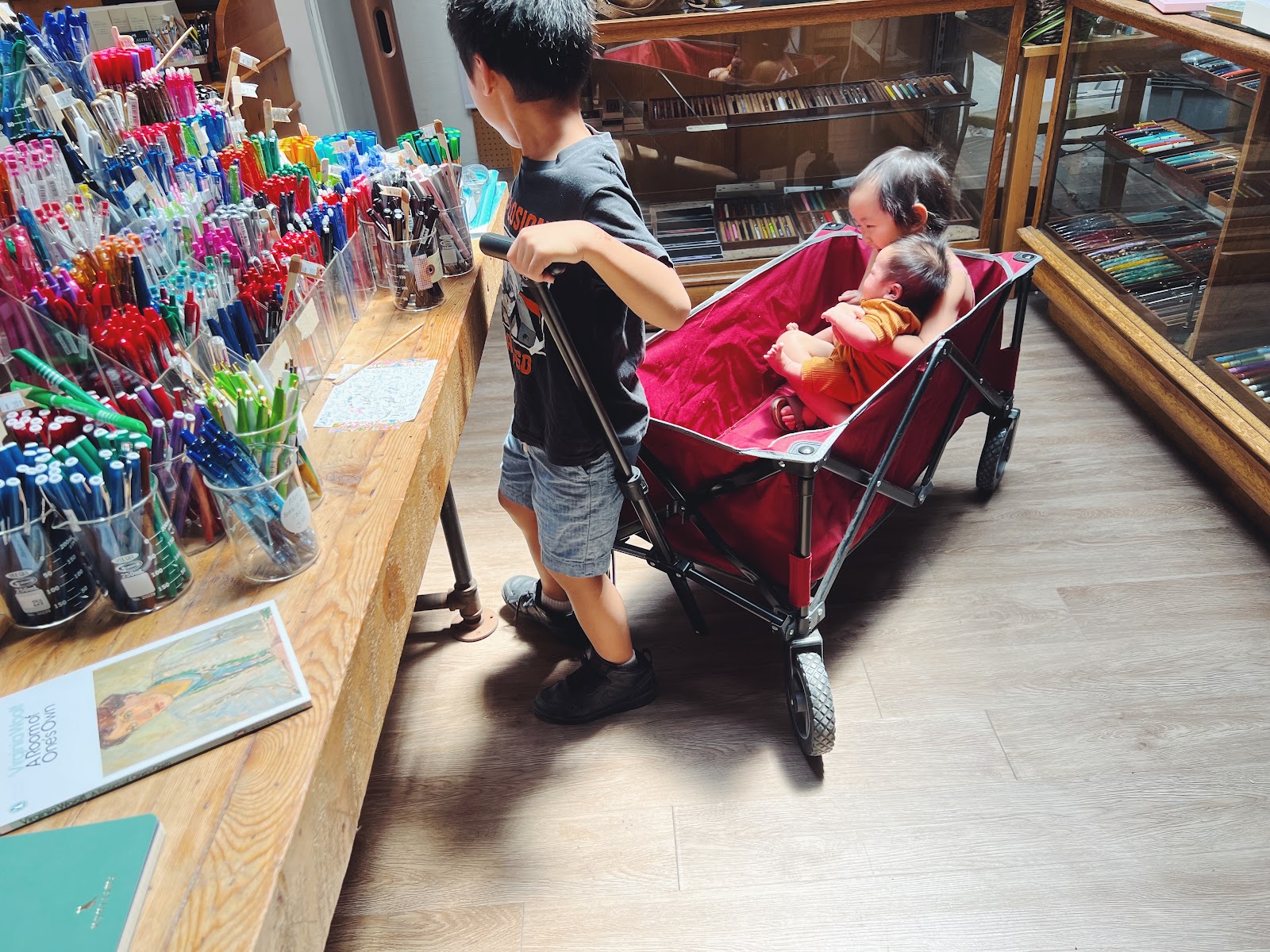 *In celebration of the holiday, we’ve made a $500 donation to the Anishnawbe Health Foundation, which is doing great work close by to us here in the studio shop.

That picture of your kids. So, so cute!
My kids are now in the teen and young-adult stages of life, so I miss that playful stage of life.

Sounds like a fun day indeed.
Thanks for making that donation.