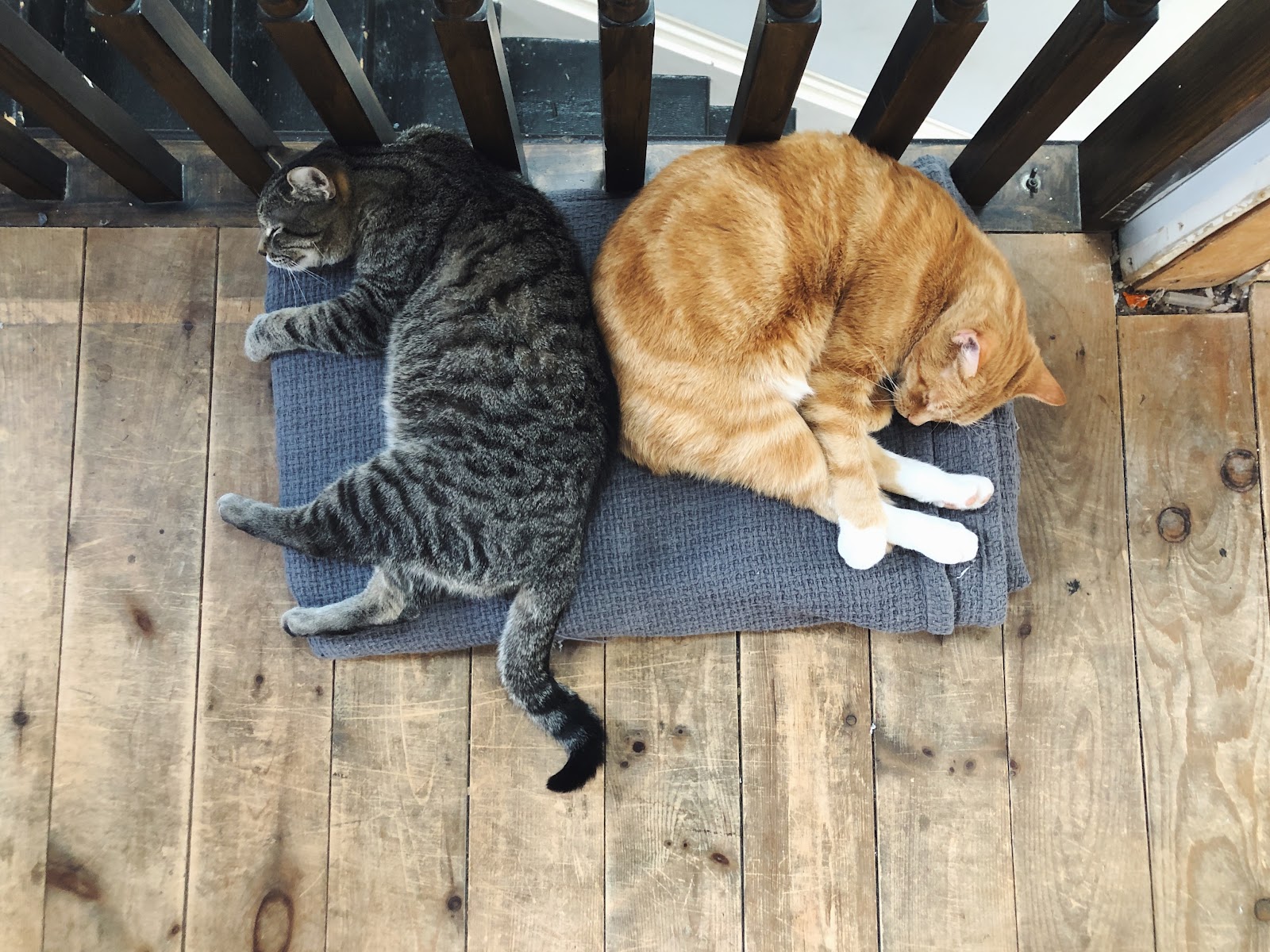 In a world where even Queen Elizabeth has Covid and stationery shops are on the brink of collapse, there is joy to be found in the cracks.

Chicken (orange, reluctantly ours) and Tuna (grey, not ours but a stray who one day wandered into our house and never left our hearts) have a long history of ambivalence, unrequited love, abandonment and avoidance, and now, a new chapter: a shared bed. Tuna originally started coming over I believe mostly out of an attraction to Chicken, who did not share his affections—to say the least.

And now they are, every once in a while, sleeping together, after months of back and forth, displeased looks, the occasional low growl upon encroached personal space.

How did this happen? Let me tell you: I washed a blanket, hung it dry, folded it and left it here to be brought down. Chicken frequently sleeps on the folded and clean laundry here in this spot, in baskets or in stacks, which normally don’t stay very long, but upon discovering that this small, rectangular spot is just large enough to be a demilitarized zone of warmth and tails entangled, I’ve had no choice but to leave the blanket here. I’ve been gathering evidence of this ever since.

I believe it’s usually Chicken asleep first, and then nudged gently aside by Tuna, although I’ve never seen it in action, my overbearing hovering possibly a deterrent for such intimacy. Actually, Tuna started by sleeping on the floor four feet away, three, two, and I guess one day he decided that love was worth it, and that there was enough space on the door for the both of them. I wouldn’t go so far as to say that Chicken has accepted or even tolerates Tuna; I believe he has simply given up and is too tired of having to skulk away.

I have googled more cat behaviour in the last six months than ever, and there are lots of mysteries still, for what is a love story without cavernous spaces left open to the fates? Tuna has occasionally tried to lick Chicken, who is not a fan, but he also does this thing where he sort of nibbles at Chicken’s feet or the base of Chicken’s tail. He does it very carefully, sort of eyeing Chicken, tentatively leaning forward, mouth open, backing off, coming forward again and then giving a little chomp, to which Chicken startles, offended, and retracts whatever limb is available for tasting. The audacity! 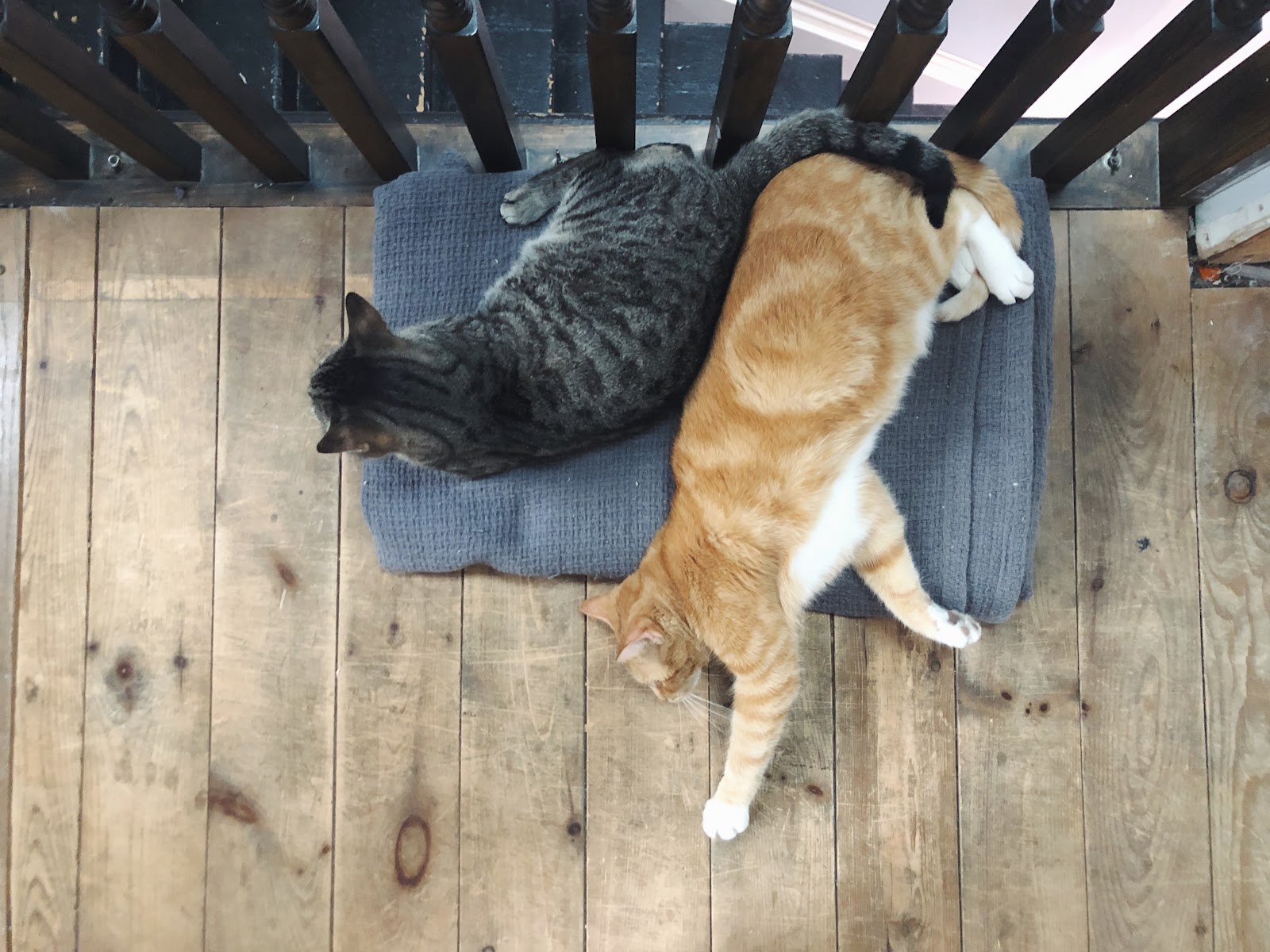 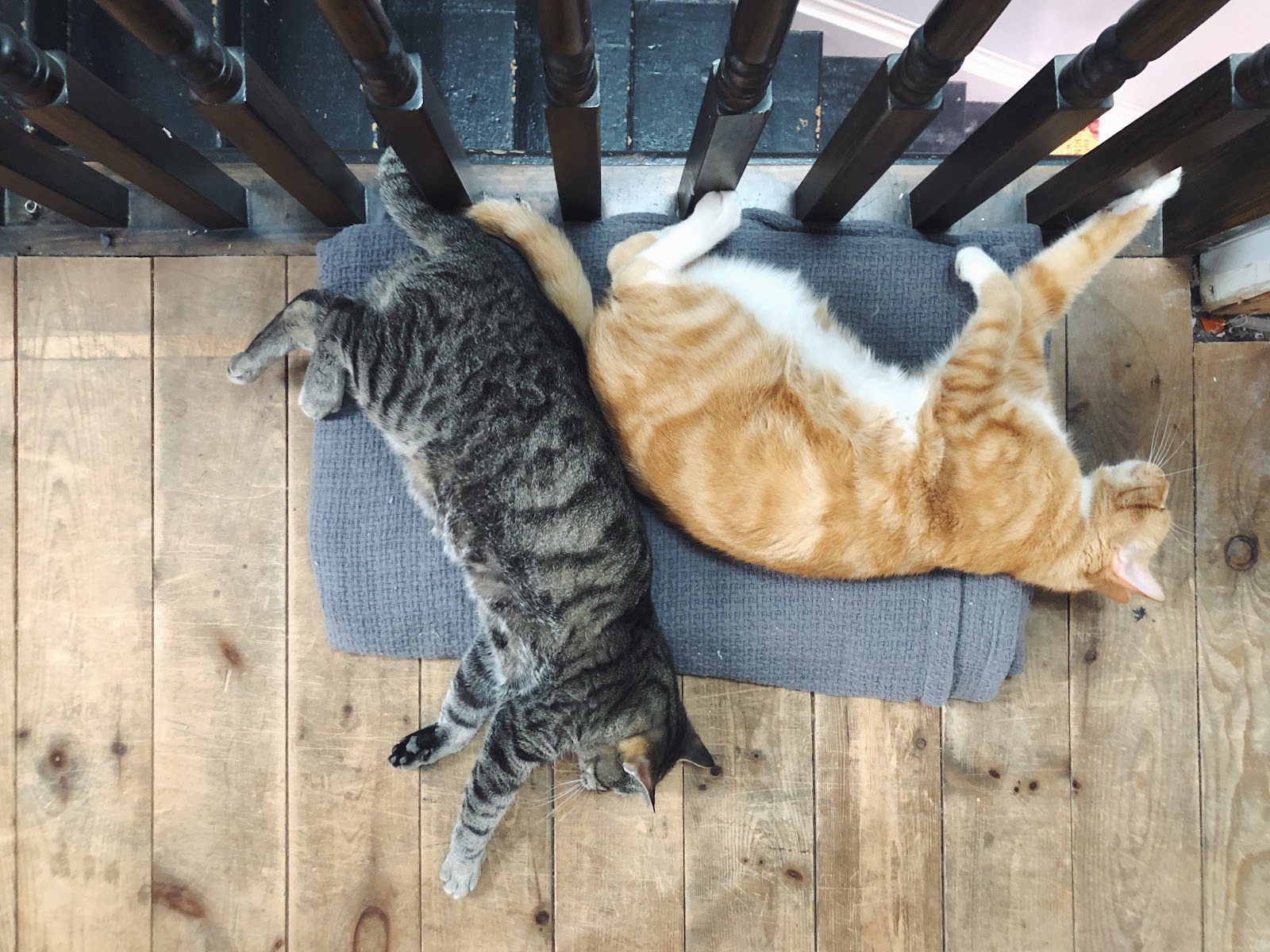 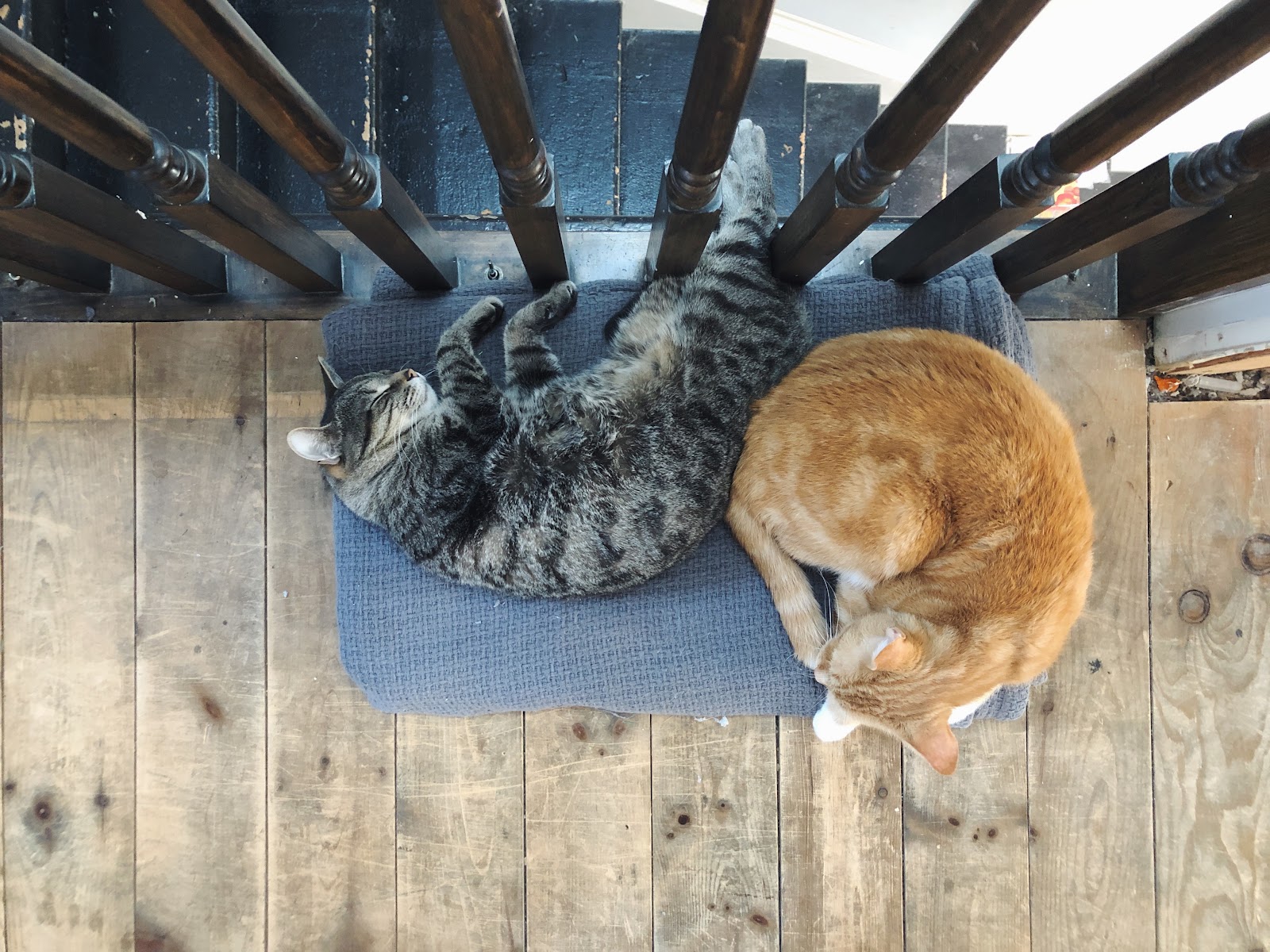 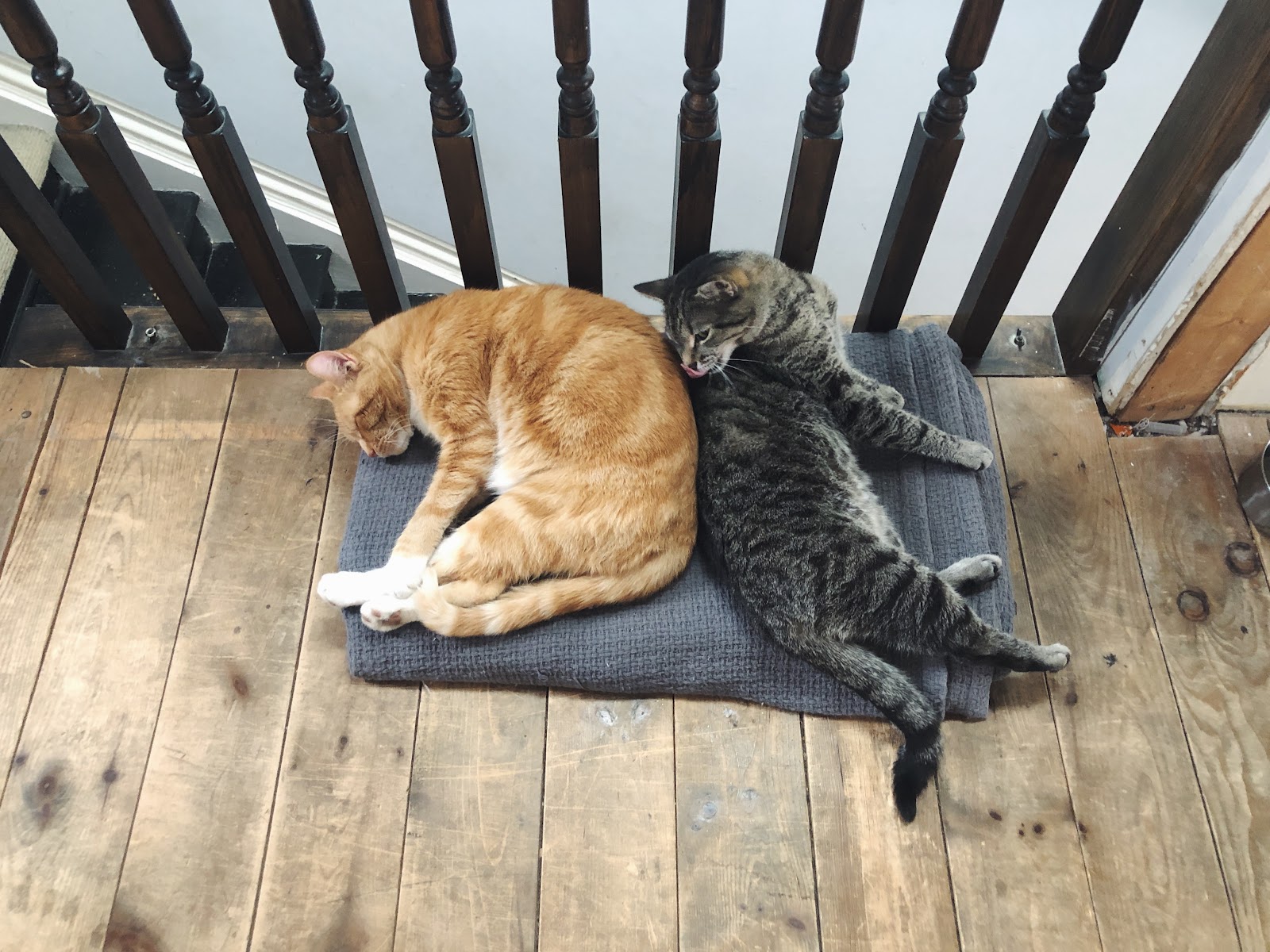 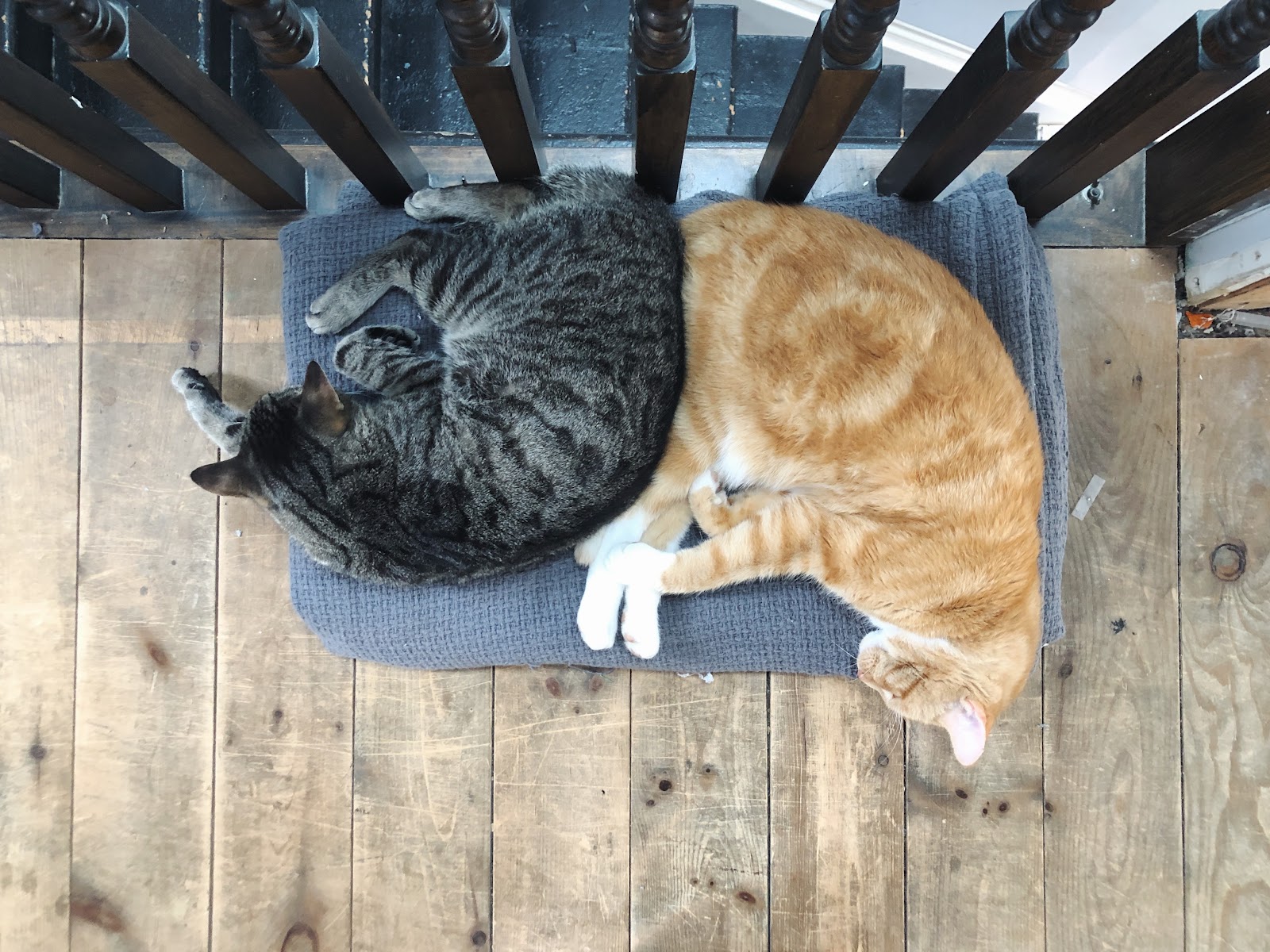 Alas, all good things must come to an end, and I’ve removed the blanket. We’re doing some work upstairs, and everything was starting to be covered with drywall dust along with the cat hair. These photos are all that remain and yet on the internet, what does not live forever? 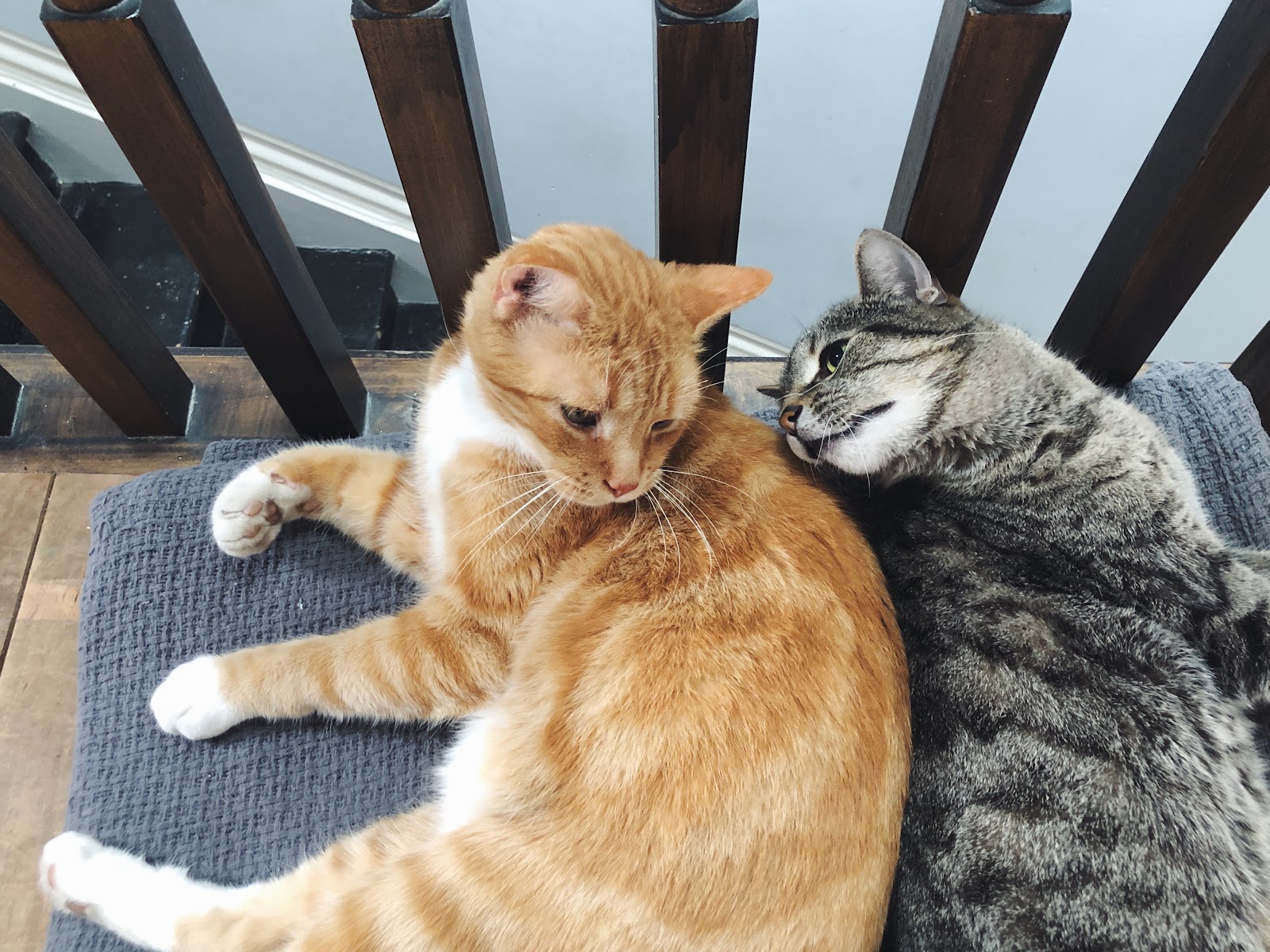 I love hearing about how Chicken and Tuna are getting along. Ollie sends his love. He’d be Tuna’s best friend if he’d let him.

I have to say that naming the cats Chicken and Tuna is <chef’s kiss>. Brilliant. I love these posts.

They make a nice yin/yan pattern with their bodies :-)

Whoever wrote this, can I be your friend?

These pictures kills me. It’s love all around.

Love these two and your daily Instagram stories about them. I live in Toronto and although I’ve never visited your shop, these two (as well as the stationary ofc) definitely make me want to visit!