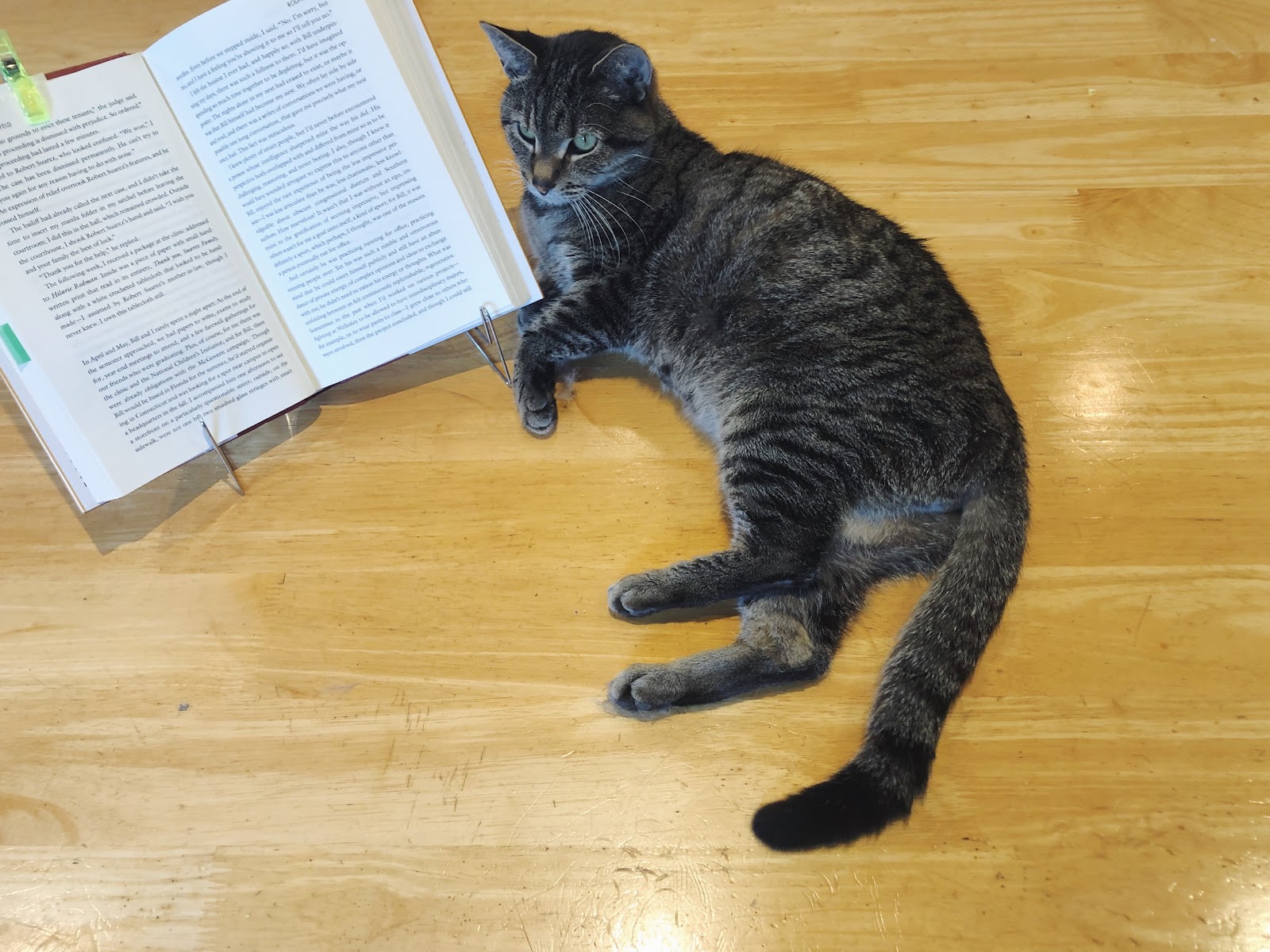 I now have two cats who relax in very different ways. The grey cat (not actually ours) is highly affectionate, a bit goofy, is constantly alert, always looking out for a snack or a head to butt or a drink to sniff, always looking to be in the middle of all the action, usually the middle of the kitchen table. The slightest noise and could it be? A bag of treats opening? No. But maybe someone coming to pet him? No. But possibly someone spreading some butter on some toast? No. But sounds like another cat to adore and harass from afar and up close? No, that cat has left the building, or is just avoiding you (and me) entirely. He’s just so hopeful all the time, an endless fountain of wishful thinking. It’s endearing, as you watch him try and jump onto the table and his front paws make it to the edge of the table but he doesn’t have quite enough momentum for his front paws to pull himself all the way up so he falls back to the floor.

Chicken, on the other hand, actually ours, is committed to pretending that no one else exists in the world, regardless of hands that squeeze their way into that white belly, neck rubs and ear pulls, wiggles and squishes on the nose with a fingertip.

I have found that one of my most relaxing times in the day is driving across the city to pick up or drop off Naomi from preschool, which I know seems like the opposite of most people’s reality, why most people have enjoyed working from home, being able to cut out the soul-sucking, cross-city commute. But actually it’s one of my favourite parts of the day: dropping her off in the morning and having the whole day spread out in front of me, full of potential, and then picking her up, hearing all of her stories and getting ready for the chaos of dinner and homework (Caleb) and bath time and reading. I find that if I’m mentally prepared to take my time, for people to turn left when left turns are not allowed, when streetcars break down, when taxis and Ubers are making u-turns on narrow roads, their hazards on, their windows rolled down and their arms waving out the window, when you account for this inevitable colour on the drive, it all goes by more smoothly.

On the ride itself, when it’s just me, is usually an audiobook, tea in a thermos, sometimes a snack, watching the city streets change over time. Seasons, weather, rain, the cafe TOs, cyclists, stores opening and closing, construction progress. Along Dundas, right close to the AGO, they recently cut down some of those massive, ancient trees that once provided shade to the courtyard play area for some daycare or preschool, and I was heartbroken to see it happen in slow motion, branches cut off and fed into the shredder, the trunks taken down block by block, and then it turns out they were demolishing the beautiful old church and some shopfront buildings and now they’ve got the big machines out, making Swiss cheese out of the ground, vibrations spreading to my car as I sit at the red light. Presumably they are making condos, housing that’s much needed in this city, even if it’s at a bit of a loss, those towering, shady trees, that old church.

I got stuck behind a garbage truck the other day, eastbound on Gerrard, the southern edge of Allan Gardens, between Jarvis and Sherbourne. It’s a tight street with houses on the south side, bike lanes on both, and a lane of parking. With one lane for each direction, the only way to pass the streetcar is to go in the opposing lane, which, during morning rush hour traffic, is usually full. For one relatively small city block, I was given abundant time to contemplate life.

In our earliest days at 906 Dundas West, I remember discovering that along arterial roads or thoroughfares, the city picked up garbage at night, when there’s no on street parking, no impeding traffic. It was surreal, to be in an empty shop with its lights on against the night, and then the screeching, churning stops of the garbage truck careening down Dundas. These guys know how to drive a garbage truck. Not quite the Catbus out of a Studio Ghibli film, but there was something fascinating about the machinations of a big city, having only moved to Toronto six years earlier. What a delight, this secret nighttime garbage collection, while everyone else was asleep. This was all obviously before kids, when I had abundant time to hang out in an empty pen shop at night.

This city is still magical, although some of that curtain has been lifted. I recently heard that the privatized garbage collection on the west end, which was supposed to save the city and taxpayers money, has now been discovered to cost more than the public garbage collection on the east end. Everyone is disgruntled! I live for these salacious, hyper-local municipal politics. When all the Covid news and international news and climate crisis news all seems a bit too much, I like to get lost in city councillors’ debates over the Gardiner and local cannabis stores on main streets and cafe TO initiatives. I almost (almost) called 311 the other day, to let them know that the no-left-turn light at Dundas and Spadina hadn’t caught up with daylight savings, but I figured there were probably people who were too involved in local affairs, and I was walking a very fine line. I’m already channeling that old man who calls the city to complain about errant squirrels. 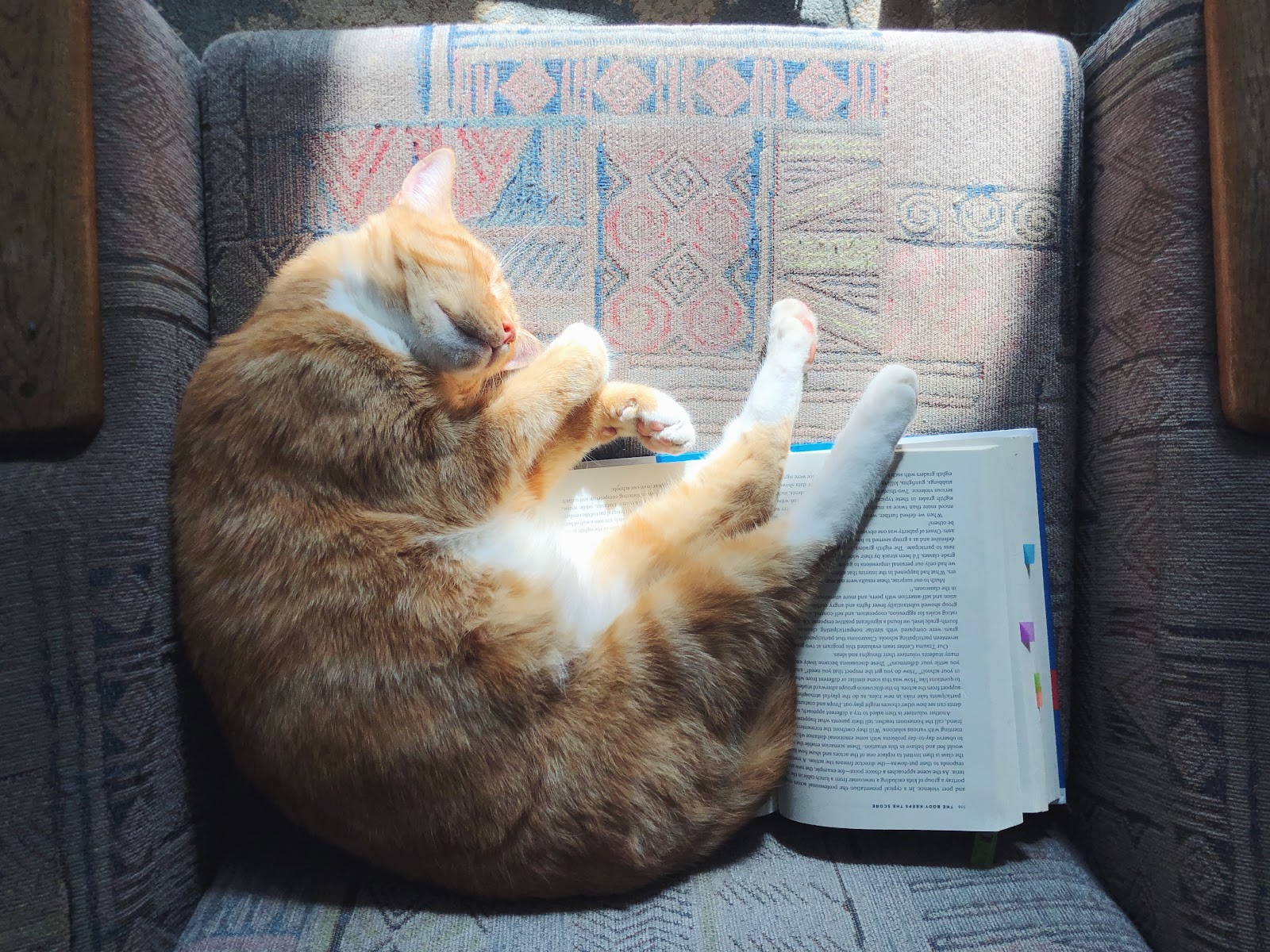 Always happy to read about the cats. It is nice to see that Chicken is a reader.