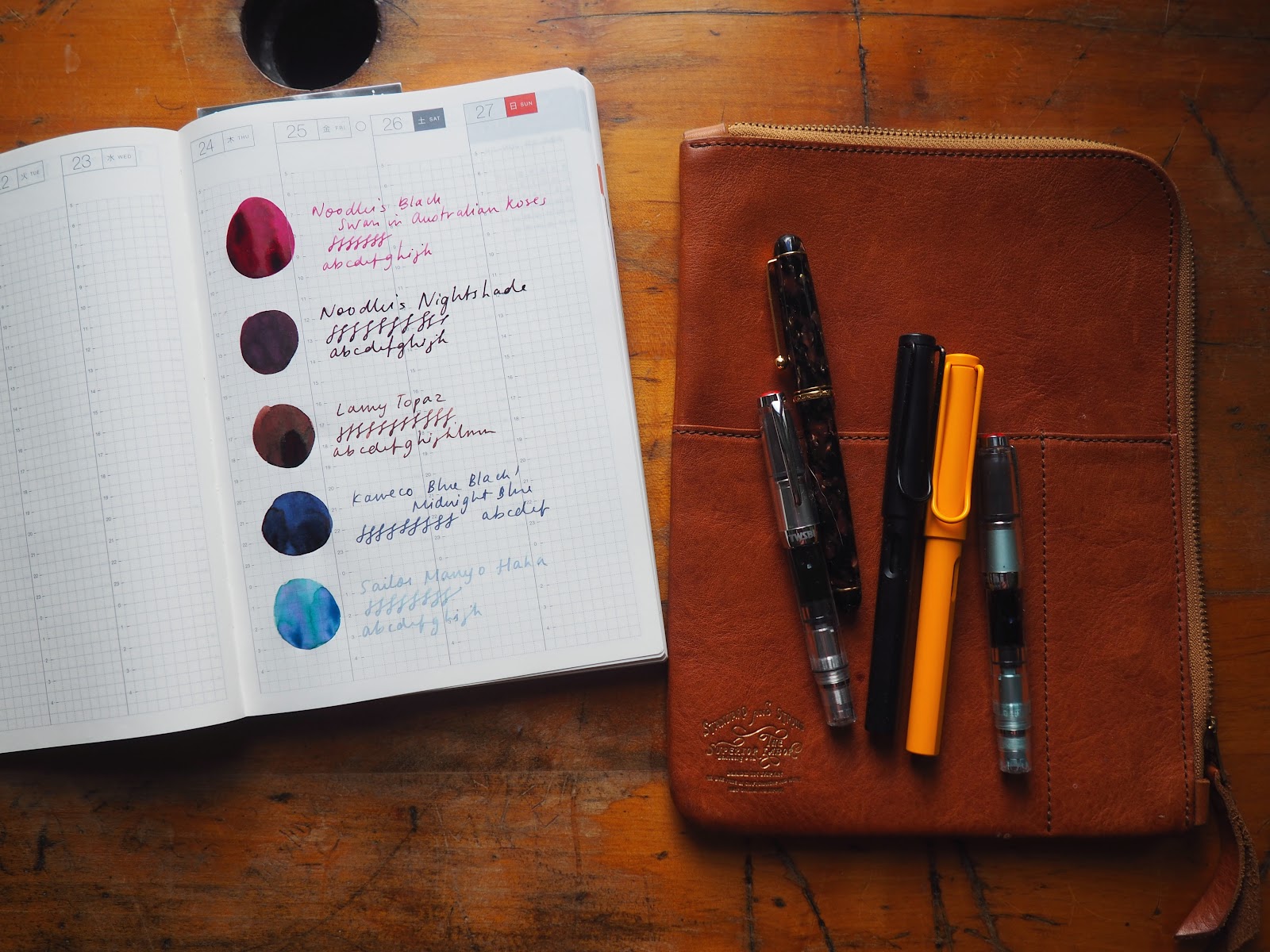 The paper is Tomoe River in a Hobonichi. 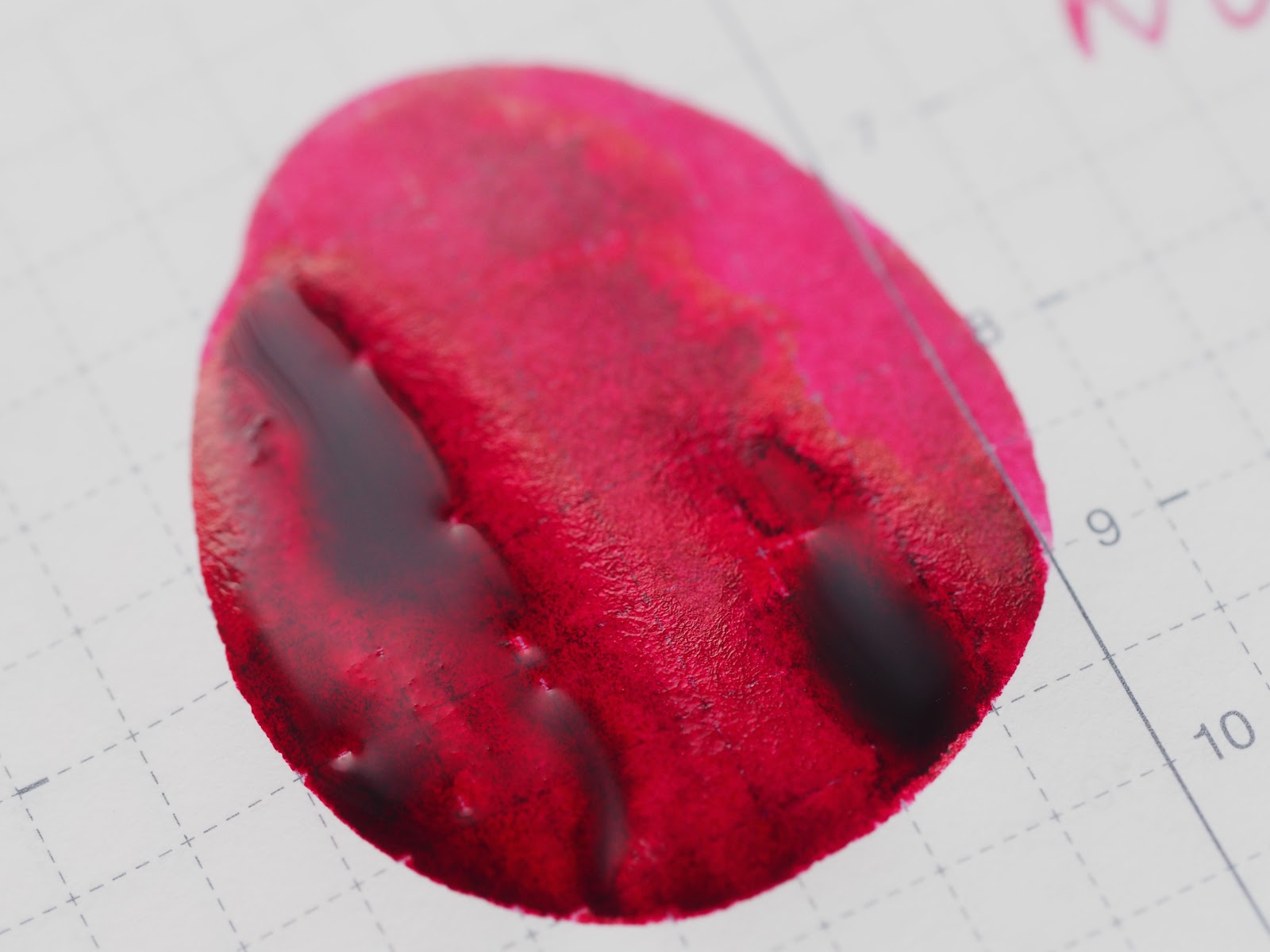 Noodler’s Black Swan in Australian Roses: one of our more popular Noodler’s inks. I’ve always been more partial to the English Roses, which is darker, more purple, maroon, but this is a bit of cheer. 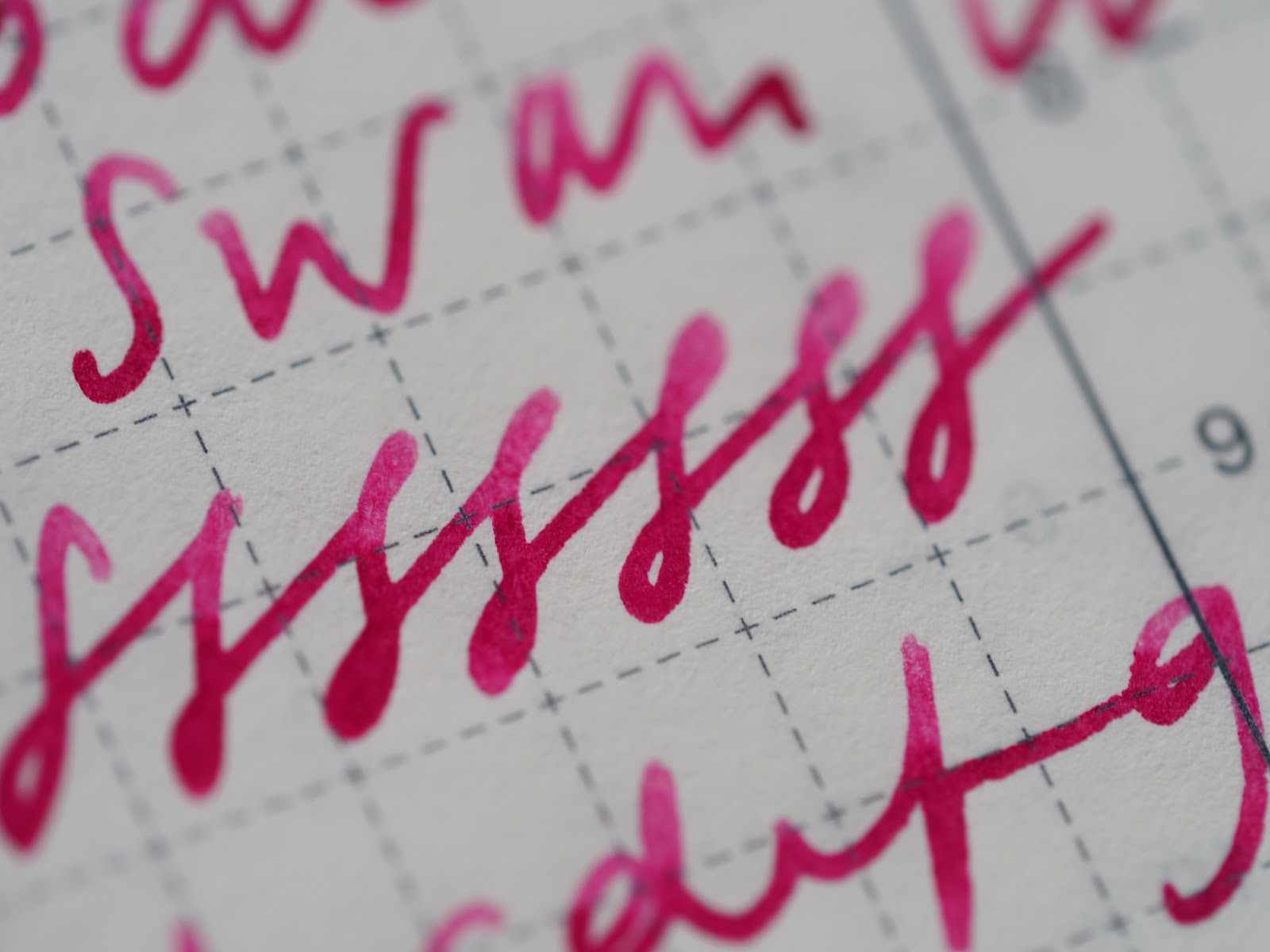 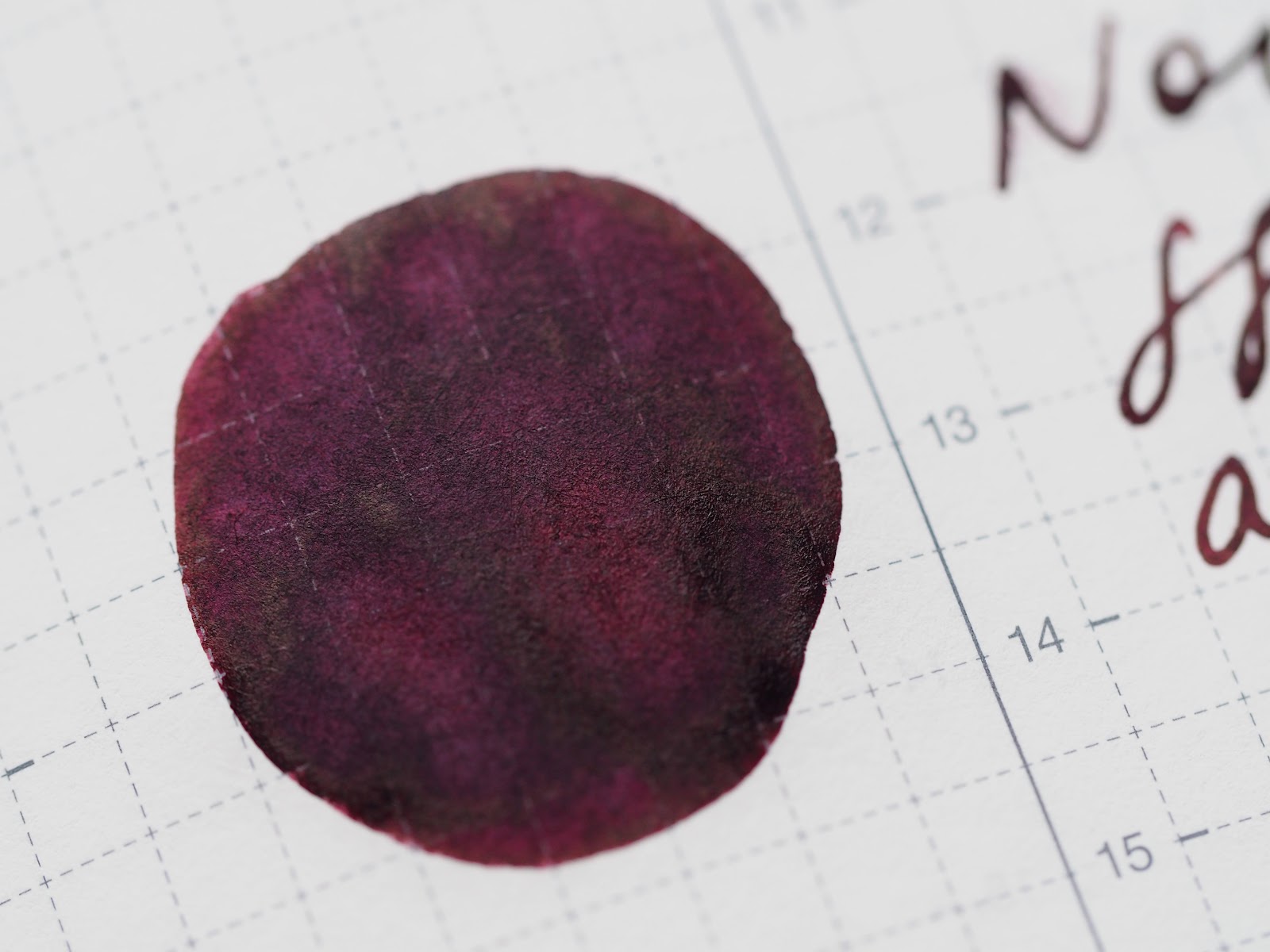 Noodler’s Nightshade: An old favourite ink that I used to use once upon a time when I was a teacher. Dark enough, maybe, for an office. 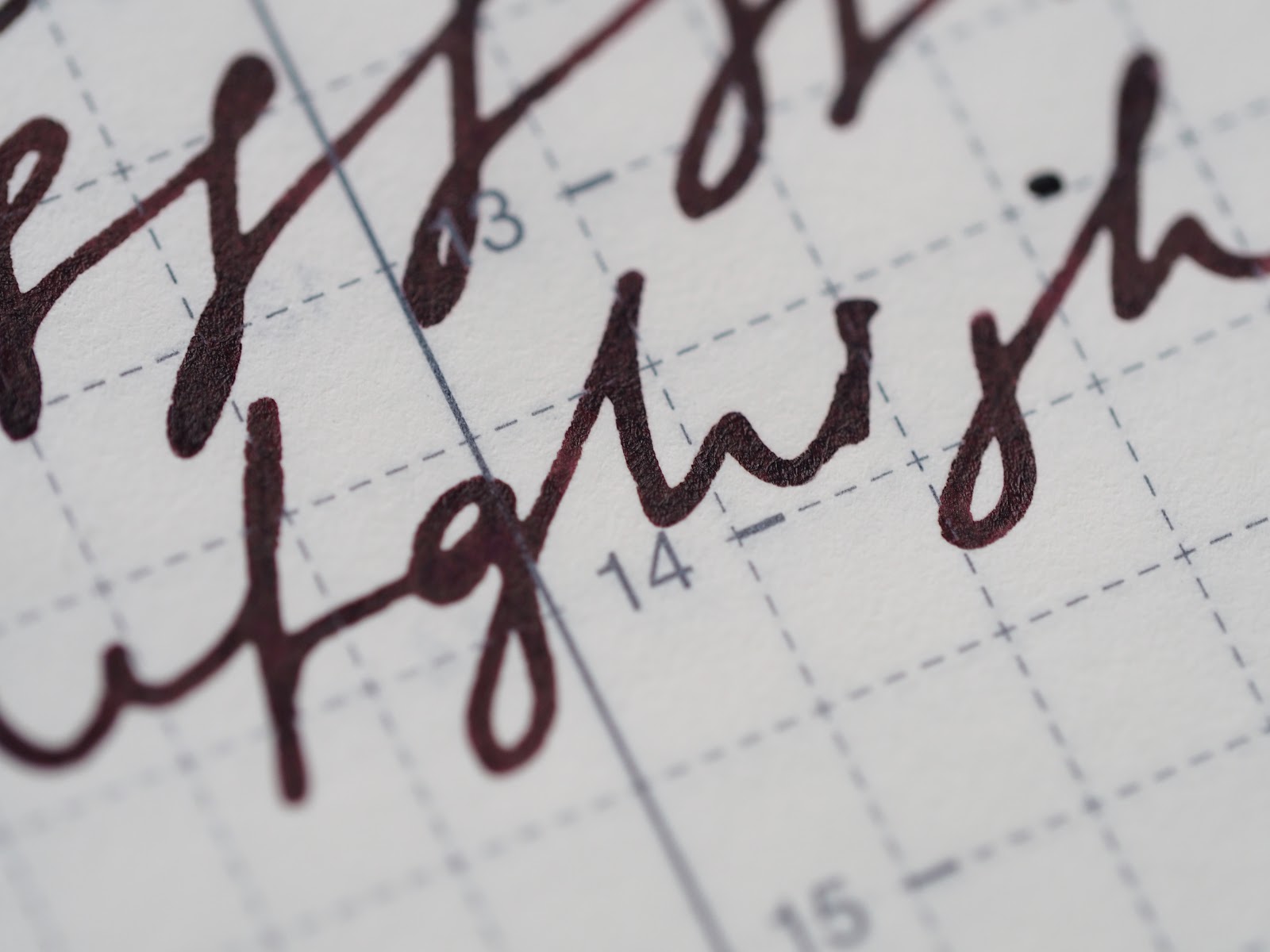 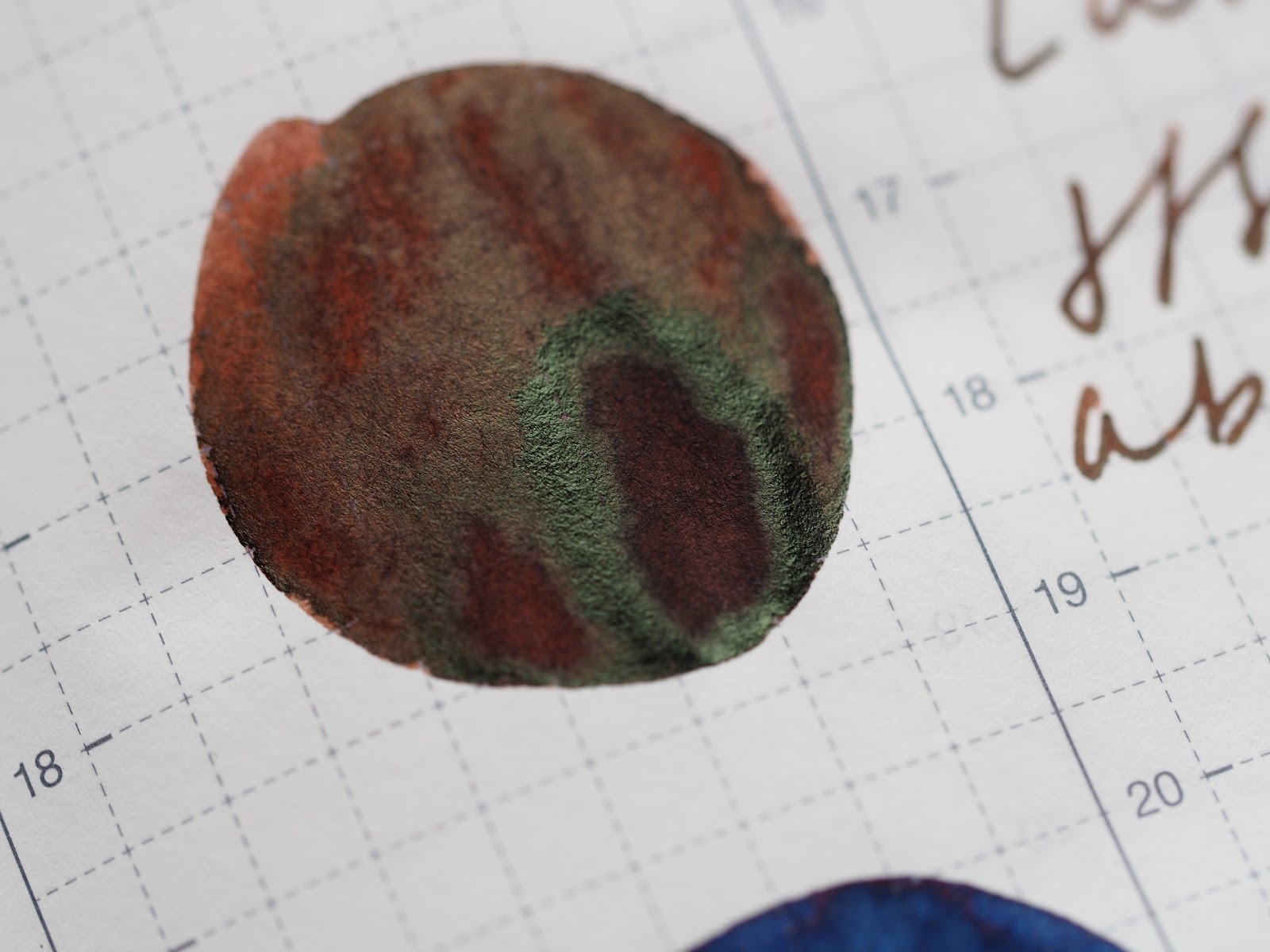 Lamy Topaz: Brown inks are some of my favourites, and yet for some reason I have been waffling back and forth on whether or not I need a home bottle of Lamy Topaz, which I’ve inked up half a dozen times since Lamy released their crystal line. I’m not one for a lot of sheen or shimmer, but this one has just enough (which is to say, not a lot). It’s a great medium brown. 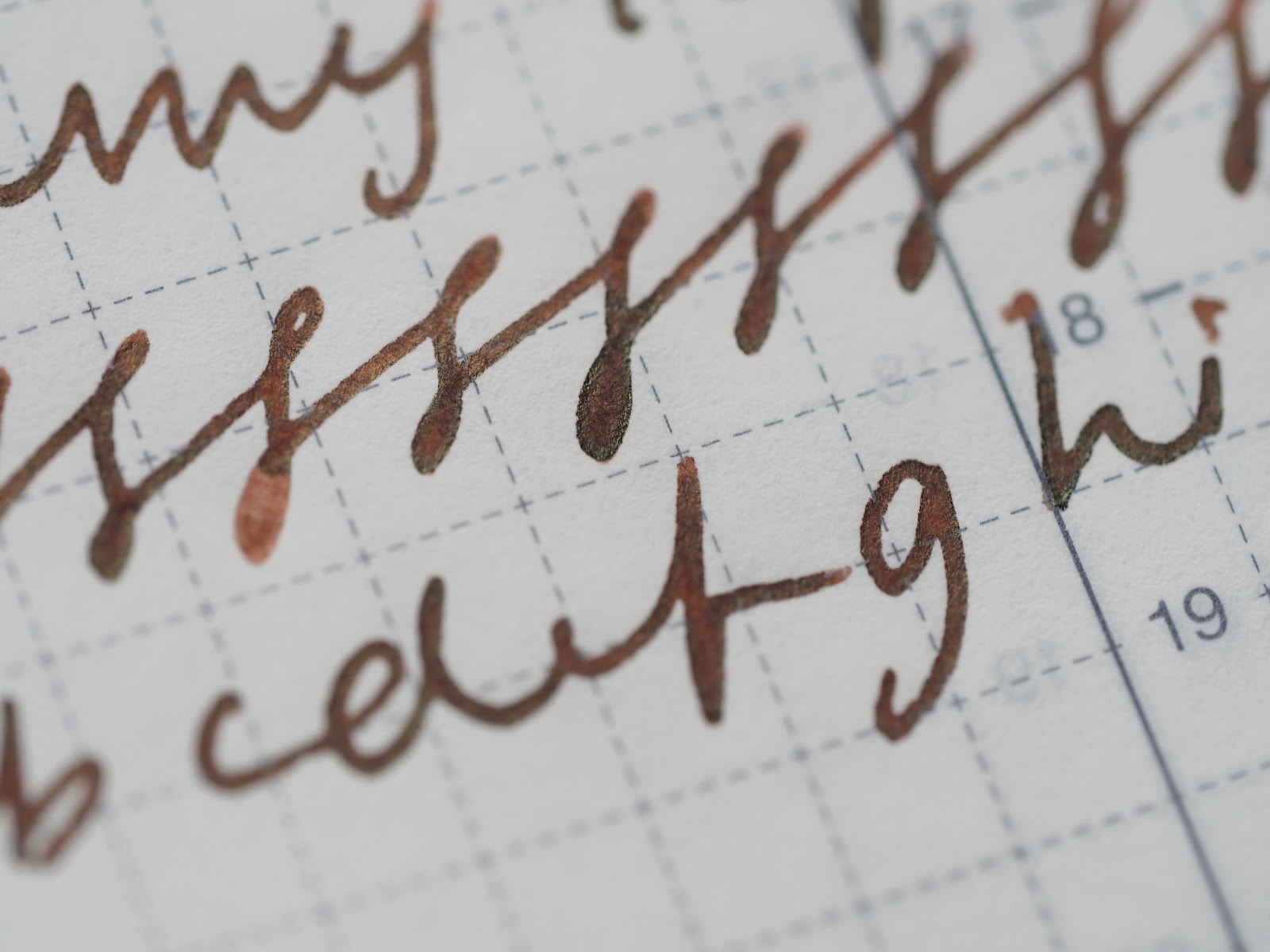 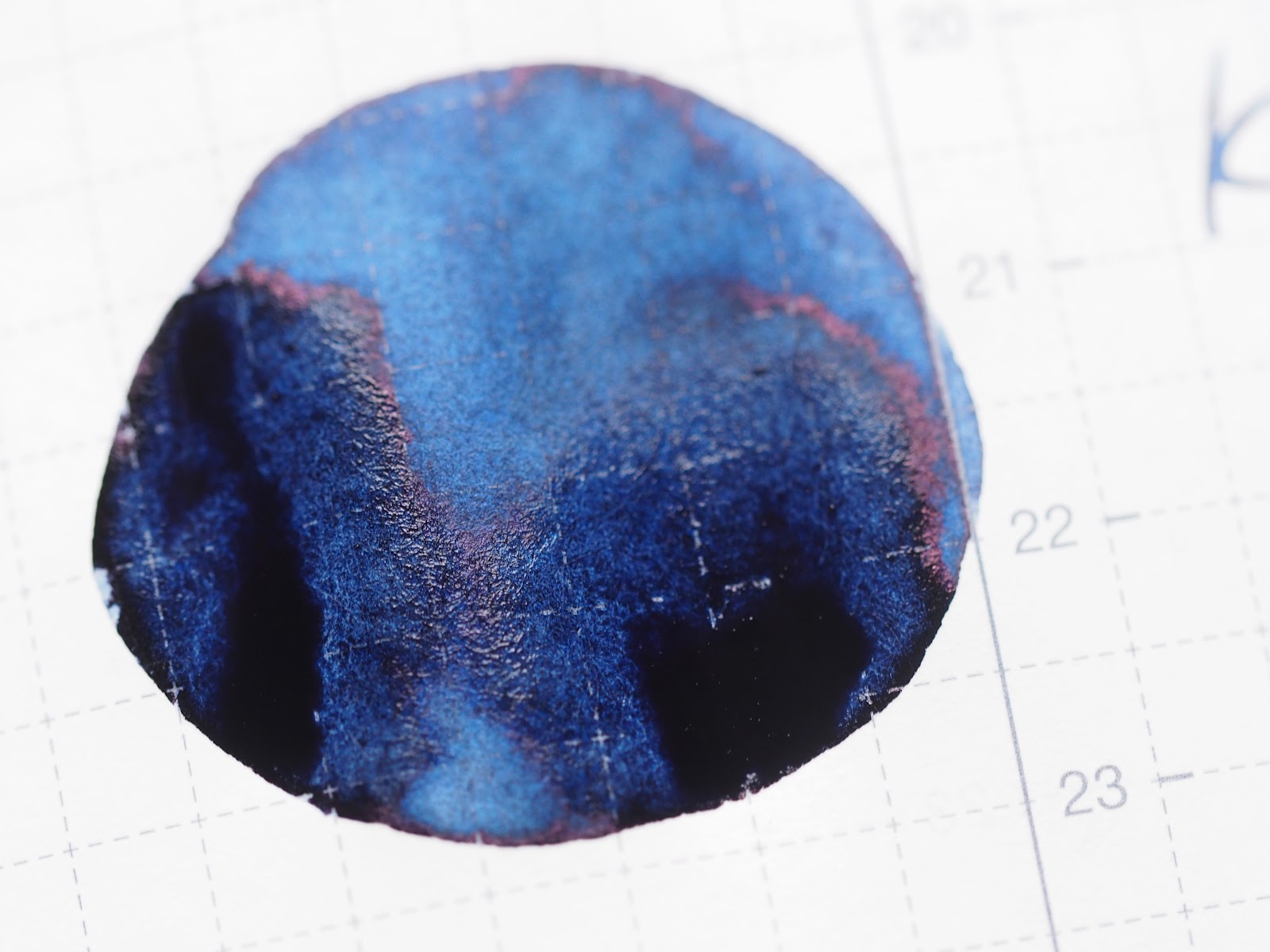 Kaweco Midnight Blue: I really like blue-blacks, and I’m surprised I haven’t used this one before, or at least more frequently. It’s a classic blue-black that writes smoothly. There’s a satisfying mustiness to it that is not super noticeable, but makes it a non-flashy, solid ink. 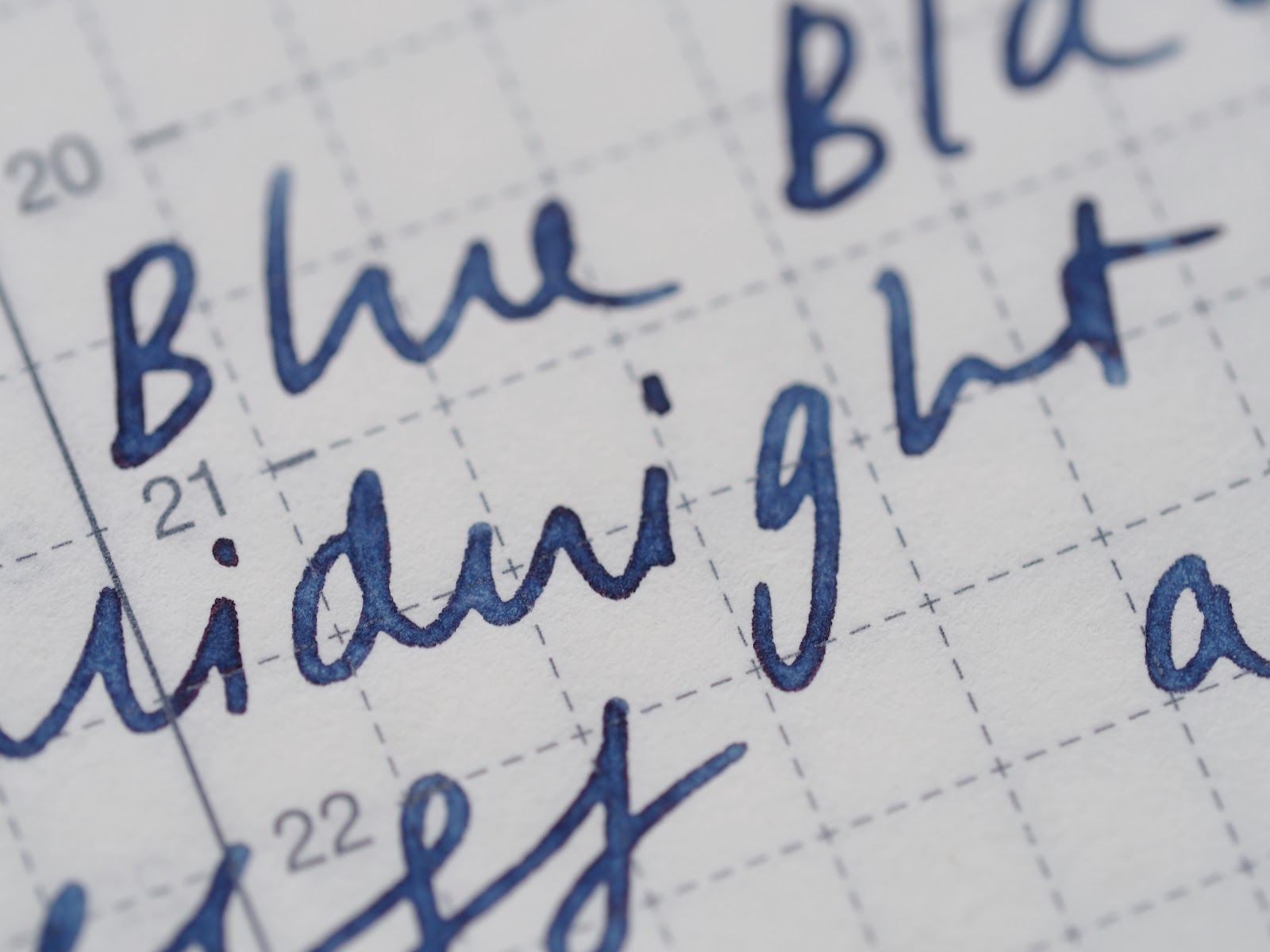 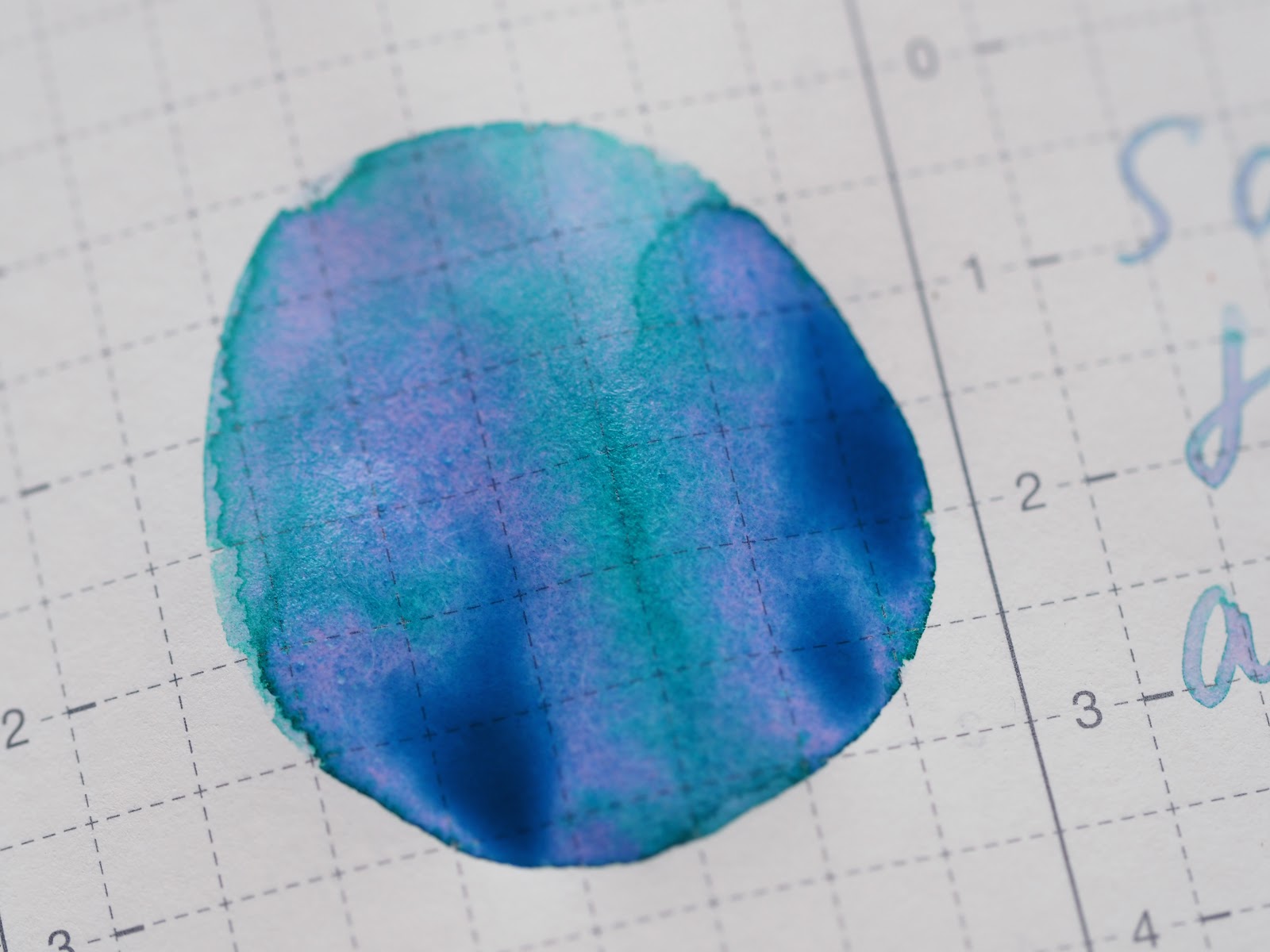 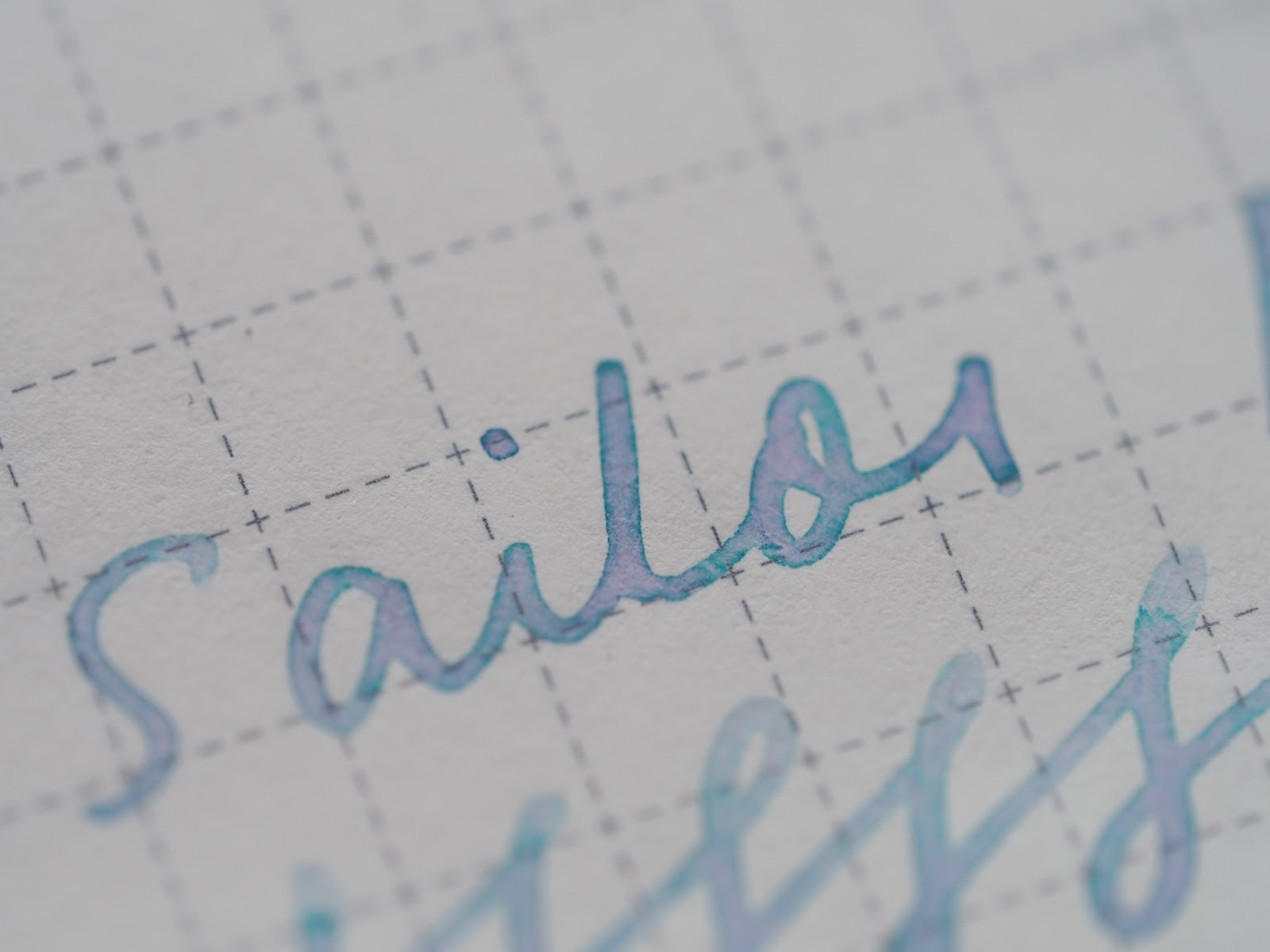 I’ve titled this post During Winter Lockdown, which is a bit tangential, as the inks are not related to being in lockdown, but just what happens to be in my pens. I’ve recently begun making samples at home, which is a meditative exercise, listening to audiobooks or music. Sometimes the kids help, which makes it decidedly less meditative, and more...high stakes.

But mostly, I’ve been making them at night, in a little cone of light, and it is also satisfying, to have neat stacks of bins, all the samples made. Something, at least, that can be crossed off a to do list.

I’ve also been finding the inks that have been popping up in the queue to be made into samples a pleasant surprise for my own pens. I tend to get into comfortable ruts, always picking the same inks or the same colours—greys, browns, blue-blacks—in part because I only have bottles of ink that I love, and I end up using them over and over again. As my preferences change over time, though, I’ve been finding I’ve left behind some old favourites. Rediscovering colours, but also trying out other inks that I’ve never tried before. 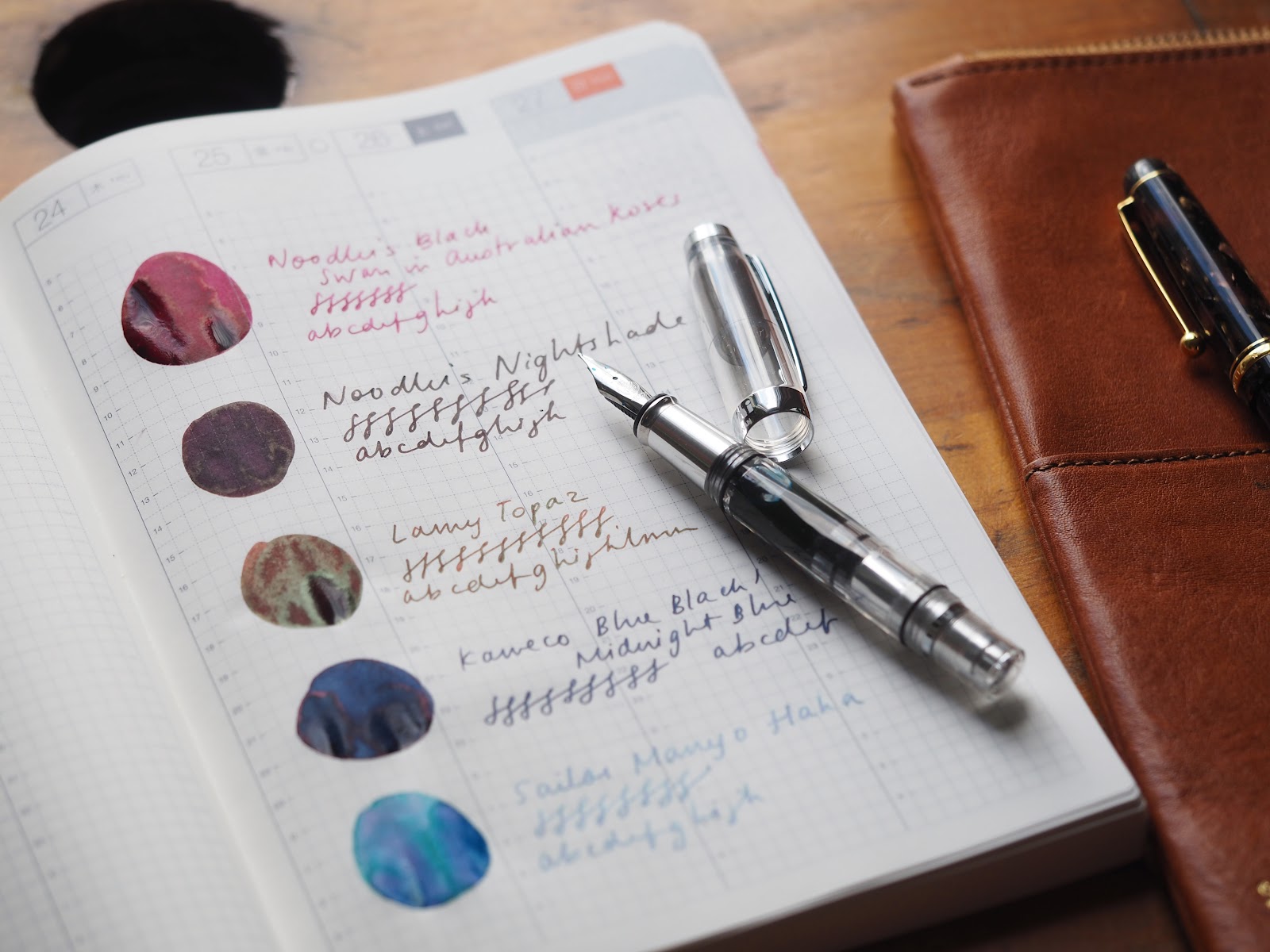 I love seeing what other people have inked in their pens. It’s a great way to discover new ink brands & colors as well as a reminder for me to revisit old favorites.

I also have my TWSBI with a medium nib currently inked with one of those cool complex Sailor colors. I’m using Sailor 162 right now. The medium nib on the TWSBI really lets this kind of ink shine.

Ive not been able to stop thinking about the sailor Haha ink since i first saw it a few weeks ago, but i am concerned it’s too light to write legibly with – what do you think? Would a M pilot nib be sufficient for it, or does it need something very broad to be read well?